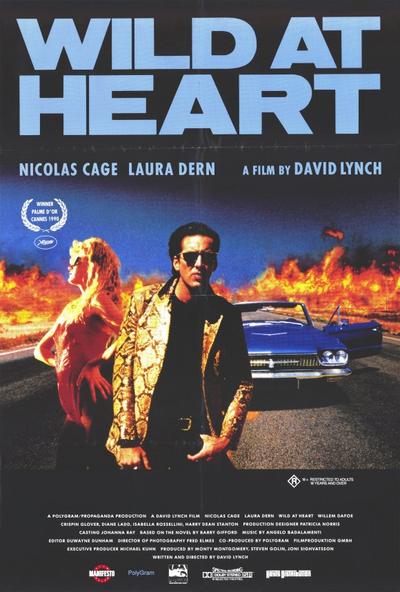 After breaking parole for self defensive manslaughter, Sailor Ripley and his girlfriend Lula Fortune head down the highway for sunny California. Lula’s mother sends out a private detective and a hitman after them. Sailor and Lula encounter an assortment of extremely bizarre “people” while discovering hidden secrets about one another. Full of lurid imagery and references to The Wizard of Oz. (Written by Jennifer Harrison)

Quote:
Among the many Bonnie and Clyde-style road movies in cinema history, David Lynch’s 1990 film, Wild at Heart, is unsurprisingly the weirdest. It is also almost certainly the most self-conscious entry in that cycle of films that comprises Gun Crazy, Badlands, and True Romance (and its bastard cousin, Natural Born Killers). Each of these films follows the crime spree of a pair of lovers for whom sex and violence become entangled in an imaginary world of pop culture referentiality: for Badlands’ Kit and Holly, this is the world of James Dean and teen magazines; for Wild at Heart’s Sailor and Lula, it is the world of Elvis Presley and The Wizard of Oz. Like their counterparts in Nick Ray’s They Live by Night, Sailor and Lula “were never properly introduced to the world we live in.”

But as with so many of Lynch’s films, the world we live in is not particularly relevant. Wild at Heart takes its protagonists’ twisted, perverse subconscious as its reality: a world of circus freak hitmen, trailer trash Wicked Witches, and, well, Crispin Glover. Sailor and Lula’s crime spree (actually a comparatively tame affair, consisting of a few parole violations, some assault and battery, and a botched armed robbery) is a retreat from a seductively wild and weird world of “S-H-I-tut” into the security of that place over the rainbow.

As lovers on the lam, Sailor and Lula (played by pre-Con Air Nicolas Cage and pre-Jurassic Park Laura Dern, respectively) follow a yellow-brick road through the decidedly un-Oz-like American South, asserting their “individuality and [their] belief in personal freedom” with a snakeskin jacket, a convertible, and some high-kicking dances. Hot on their trail is a menagerie of Lynch’s most perverse and depraved characters: Harry Dean Stanton’s smitten and pathetic Johnnie Farragut, Willem Dafoe’s dentally challenged sadist Bobby Peru, the sinister and pockmarked Marcellos Santos, and Diane Ladd as Lula’s momma, vying with Tommy’s Ann Margaret for the title of most repulsive and least responsible mother in a major motion picture.

Wild at Heart constructs a bizarre nightmare landscape, not only through its notoriously violent imagery, but also through Lynch’s typically meticulous sound design, an aural collage of crackling fire, ’50’s hipster rock ’n’ roll, and Wicked Witch cackling. This is highlighted by Angelo Badalamenti’s absurdly operatic score, which adds a super-size portion of gravitas to the trashy value-meal that is the film’s plot. Like all of Lynch’s work, Wild at Heart combines these elements in pursuit of a fleeting glimpse of the twisted paths and dark interiors of the subconscious. As Sailor lovingly tells Lula, “What goes on in your mind is God’s own private mystery.”