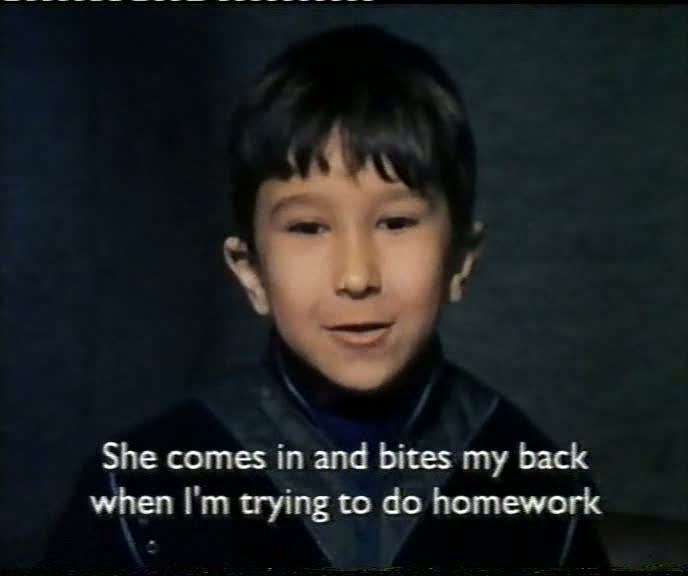 Matthews’ nomination of Homework (the film ended up not getting a single vote) was clearly a bid on behalf of documentaries. His article is one of the most stirring defenses of the documentary as an artform that I have ever read. It came to me at a time when I was not sure what films I wanted to make (guess what, I’m still not sure) and was especially conflicted about documentaries, the secondary citizen of cinema. For me, Matthews’ essay was a galvanizing corrective towards a host of misconceptions about documentary as art.

“What movie is this?” The first line of dialogue, innocently offered by a schoolboy who casually notices the camera while walking to school… and yet in the context of this film such a banal question takes on enormous significance — what kind of movie is this? When the schoolmaster (kept off camera) asks the same question, Kiarostami answers: “The film is just based on an impression.” There’s a sense of freshness, looseness, of seeing things for the first time, reflected in the sense of wonder on the schoolboys’ faces at the strange camera apparatus (the same wonder is echoed in the looks of Ugandan children in his later film ABC Africa). That sense of first sight bestowed on us is what great movies are all about.

And yet for virtually the rest of the film, that sense of looseness and freeness is all but obliterated, in a sequence of unrelentingly tense and claustrophobic interviews with these schoolboys in a room that resembles a police interrogation cell. Kiarostami edits over a couple dozen interviews into segments ranging from one to several minutes. He shoots the kids in harshly lit, full frontal close-ups. Most of the kids are identified as not having completed their homework, and Kiarostami pounds them with question after question as to why they did not finish their assignments. Many alibis are offered, mostly having to do with parents or siblings being unavailable to help them, or having chores. Kiarostami counters cunningly with questions about their cartoon-watching habits, eliciting a range of positive responses from the kids. But when he asks them whether they prefer cartoons or homework, the answer is uniformly the latter.

There’s clearly a kind of cat-and-mouse game being played between Kiarostami and the kids, right before the camera lens. As Matthews explains in his article, Kiarostami’s camera is not only an objective collector of true documentary moments, it is witness — as well as an instigator — to a series of lies and half-truths playing out in its presence. It’s worth noting that Kiarostami breaks ranks with convential two-shot interview technique by hardly showing himself in the reverse shot as the likes of Barbara Walters or Mike Wallace would have it — and when he does show himself, it is with the most uncharismatic of visages, like a schoolmaster sitting behind his desk during detention. Our expectations to identify with the interviewer are thus thwarted. Instead Kiarostami cuts repeatedly to the reverse shot of his cameraman squinting behind a large, imposing lens whose bulbous spectral counter-gaze resembles that of HAL from 2001: A Space Odyssey (TSPDT #4). This machine is poised as the facilitator of our interactions with these kids, and the rhythm of cuts between quivering children’s faces and the impassive camera lens creates a sensation of being caught between states of animal and mechanical The camera-eye itself is thus a surrogate for the all-seeing State, the grand machine in which these kids must learn to live and behave. Made just 2 years after Full Metal Jacket (TSPDT #505), this film is probably the closest Kiarostami has come to Stanley Kubrick territory, exploring the programming of human behavior and the human’s impulsive reactions to such conditioning.

If there is one complaint I’d make about Homework, it is that it is so unremittingly procedural, lumbering from one punishing interview of a nervous child to the next, that it walks a fine line between being about a kind of torture and being tormenting to the viewer — perhaps this line is blurred by design. But beyond the Q&A there’s an even more subtle layer of activity going on, and it’s on the layer of images. The counter-shots of the cameraman are not all the same — some show the cameraman with the faintest of smiles in response to a child’s disarming remark, and sometimes he is caught wiping his bleary eye. Within this rigidly formal apparatus, cracks of humanity show on both sides.

What is also worth considering is Kiarostami’s canny positioning of himself within the social hierarchy of the film. The film’s procedural rhythm breaks halfway when a parent barges into the room to offer his own long-winded take on the need to reform the Iranian education system, so that it breeds more creativity and freedom of thought among its children. The man’s breathless five minute monologue feels like a breach of Kiarostami’s carefully controlled interviewing pattern, and we cut to a reverse shot of Kiarostami’s most disapproving scowl yet. But if there is such a thing as crocodile’s tears, this is surely a crocodile’s scowl — up to this point the interviews have mounted instance upon instance of dysfunction within both Iranian systems and families, leading to the abuses inflicted upon these kids. Surely he’d agree with some of what this man has to say? And perhaps that’s why, as an interviewer and editor, he chooses to leave the man’s testimony intact. But Kiarostami still offers his own scowling reaction shot, perhaps as a way of covering his own ass lest his film be seen as too reactionary and critical of the status quo.

All of this comes to a head in the film’s final moments [spoilers in this paragraph], when one very nervous child breaks into a hysterical fit, afraid of unseen punishments lurking within the camera. (Again, to reference Kubrick, the kid is practically a soulmate to Ralph Meeker’s doomed character in Paths of Glory [TSPDT #166]). After much soothing (including bringing his friend into the room to stand behind him – poignantly it’s the only time two children are allowed to stand in solidarity), the child expresses his anxiety of missing his religion class and being punished. Kiarostami assuages the boy by encouraging him to recite a religious poem he has memorized. The boy calms down and delivers a poem in a voice whose tone (Kubrickian once more) is somewhere between poetic and robotic. After the movie, Dan Sallitt, Keith Uhlich, my gf and I dwelled on this moment for quite a bit. Dan seemed to suggest that it was a moment of transcendence, all of the tension and coercive technique giving way to a moment where the child embraces the tools of expression imposed on him and finds a moment of ecstasy. As much as I see his point, I’m more inclined to focus on the disturbing aspects of the moment, such as how much it resembles a Manchurian Candidate moment of successful brainwashing. I also see this climactic moment of the boy overcoming his neuroses through rote recitation as another way for Kiarostami to cover his ass, as if to ostensibly support the educational system in the end despite all the misgivings expressed to that point. Needless to say, the ending operates on multiple levels at once, able to disturb for the very reasons it may inspire.

To wrap up, some interesting background info on the film offered by Stuart Jeffries for Countercurrents.org:

After the revolution, Kiarostami continued to make films about children. The last one he made for [Iranian production studio] Kanun was called Homework, and was born of fraught personal experience – his relationship with Parvin Amir-Gholi, the art designer he married in 1969, was collapsing. He has given another reason for staying in Iran after the revolution: “An internal revolution was taking place in my household: I was getting separated from my wife and was going to take care of my two sons, so it was impossible for me to think of leaving the country.” In the film’s opening sequence, Kiarostami explains to the headmaster of the school where he wants to film: “I’ve had problems helping my son with his homework… That’s why I decided to bring my cameras here, to find out whether it’s just my son’s problem or if it has something to do with the actual education system.” Some critics took the film as a denunciation of Iran’s repressive and disciplinarian education system. But it was also informed by Kiarostami’s own memories of school which, he admitted in one interview “are still traumatic”.

Near the end of Homework, Kiarostami films pupils standing in serried ranks in a playground chanting a prayer, which breaks down as the increasingly distracted children start playing around while continuing to recite, thereby undermining the massed display of religiosity. Kiarostami cut the soundtrack to this scene after complaints from religious groups angered that the recital of the prayer was robotic and ultimately not very devout. In the final sequence, Kiarostami interviews a boy and asks him to recite another prayer for the camera, which he does, followed by a freeze-frame of his face that ends the film. The two juxtaposed prayers in Homework lead me to ask Kiarostami if he has religious faith. “I can’t answer this,” he says. “I think religion is very personal and the tragedy for our country is that the personal aspect has been destroyed. It would be the easiest thing in the world for me to say that I am religious, but I won’t. This most personal aspect of our lives has become the tool of the government’s power. The value of people is equated with their religiosity.”

Homework was initially banned for three years in Iran, and subsequently only screened for adults. “After I made Homework I was forced to leave Kanun because they disagreed with the film,” he says. 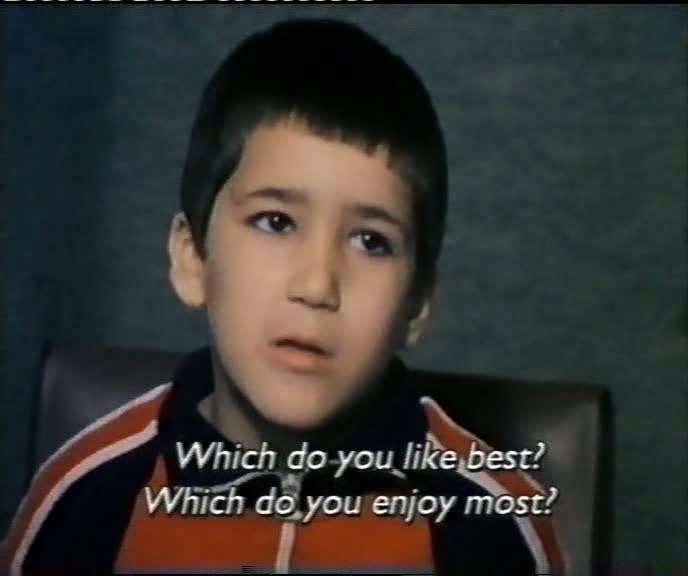 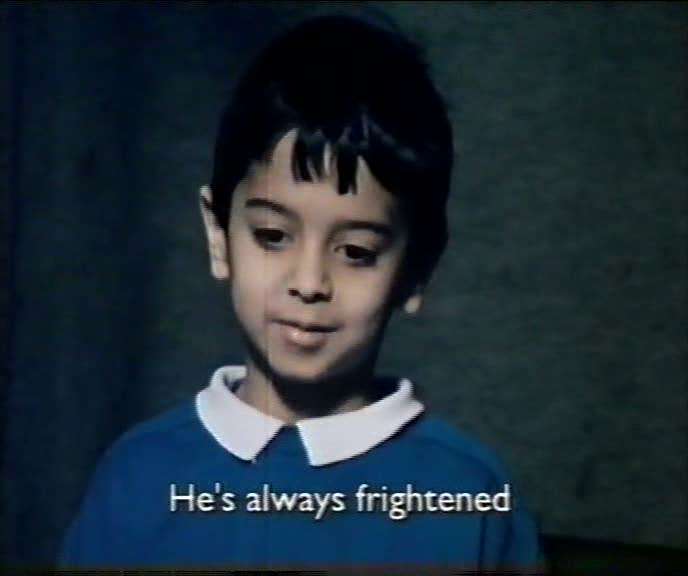