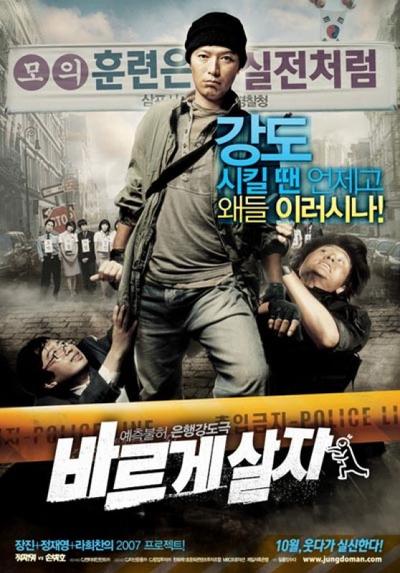 A string of bank robberies puts the public in a panic and they demand action from the newly appointed police chief to crack down on the perpetrators. In order to appease the residents of the city and carry out his own ambitions, The police chief appoints naive traffic cop Jung Do-man to infiltrate the world of the robbers.

Quote:
With the cleverest premise for a film in ages, first-time director Ra Hee-chan turns the traditional bank heist movie on its head, subverting all the conventions of the genre while at the same time managing to work in elements of satire and social criticism, slapstick and more subtle forms of humour—and the result is magical. Jeong Jae-yeong is fabulous as Jung, tackling the most absurd situations with grim determination and bringing a vital touch of sympathetic humanity to what could have been a cold character. Despite the comedic elements, the director injects some real suspense and drama to the proceedings—a difficult balancing act to achieve, realised with great skill. A must-see!
—Robert Guillemette