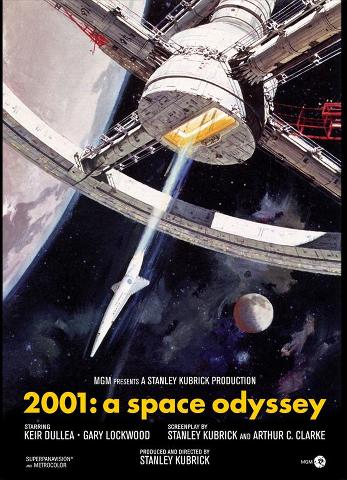 The third movement is eighteen months later, as a manned ship journeys to Jupiter, where the second monolith is sending a radio signal. This ship is controlled by a cutting-edge HAL 9000 computer, which is capable of thought but also of eluding human control.

The fourth movement is a visual tour-de-force, as Dave comes closer to discovering the origin of the monoliths and is changed forever.

Finally, the fifth movement puts a rapidly-aging Dave in an 18th century room in which he goes through the stages of his life.

REVIEWS
All Movie Guide
Stanley Kubrick rewrote the book on what a mainstream, major-studio motion picture could look, sound, and feel like with this groundbreaking work. At a time when science fiction onscreen meant bug-eyed monsters menacing scantily clad women, 2001: A Space Odyssey was a visually dazzling and intellectually challenging experience. Kubrick abandoned narrative convention to tell four tangentially related stories about man’s destiny, reflected in the conquest of space. Kubrick also insisted that a story set in outer space should look like it was taking place in outer space, and his special effects team (headed by Douglas Trumbull) created some of the most stunning visual effects to appear onscreen before or since. Unlike the effects-laden films that followed in the wake of Star Wars, the imagery in 2001 doesn’t slow the story but helps move it along, and it creates a genuine sense of wonder about the beautiful, dangerous vastness of space.

Kubrick’s embrace of avant-garde music and abstract visual textures brought experimental art to an audience that had no exposure to the works of such ’60s avant-garde filmmakers as Stan Brakhage or Jordan Belson, and the film’s resulting “trippy” atmosphere greatly increased its popularity (and revenue) as a late ’60s drug movie. Still as richly thought-provoking as ever, 2001: A Space Odyssey remains a watershed work in ’60s cinema and lives up to its billing as “the ultimate trip.”