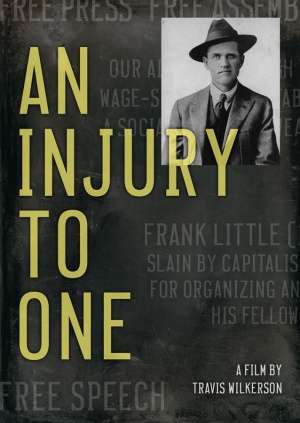 Quote:
AN INJURY TO ONE provides a corrective—and absolutely compelling—glimpse of a particularly volatile moment in early 20th century American labor history: the rise and fall of Butte, Montana. Specifically, it chronicles the mysterious death of Wobbly organizer Frank Little, a story whose grisly details have taken on a legendary status in the state. Much of the extant evidence is inscribed upon the landscape of Butte and its surroundings. Thus, a connection is drawn between the unsolved murder of Little, and the attempted murder of the town itself.

Butte’s history was entirely shaped by its exploitation by the Anaconda Mining Company, which, at the height of WWI, produced ten percent of the world’s copper from the town’s depths. War profiteering and the company’s extreme indifference to the safety of its employees (mortality rates in the mines were higher than in the trenches of Europe) led to Little’s arrival. “The agitator” found in the desperate, agonized miners overwhelming support for his ideas, which included the abolishment of the wage system and the establishment of a socialist commonwealth.

In August 1917, Little was abducted by still-unknown assailants who hung him from a railroad bridge. Pinned to his chest was a note that read 3′-7′-77″, dimensions of a Montana grave. Eight thousand people attended his funeral, the largest in Butte’s history.

The murder provides AN INJURY TO ONE with a taut, suspenseful narrative, but it isn’t the only story. Butte’s history is bound with the entire history of the American left, the rise of McCarthyism, the destruction of the environment, and even the birth of the detective novel. Former Pinkerton detective Dashiell Hammett was rumored to have been involved in the murder, and later depicted it in Red Harvest.

Archival footage mixes with deftly deployed intertitles, while the lyrics to traditional mining songs are accompanied by music from William Oldham, Jim O’Rourke, and the band Low, producing an appropriately moody, effulgent, and strangely out-of-time soundtrack. The result is a unique film/video hybrid that combines painterly images, incisive writing, and a bold graphic sensibility to produce an articulate example of the aesthetic and political possibilities offered by filmmaking in the digital age. 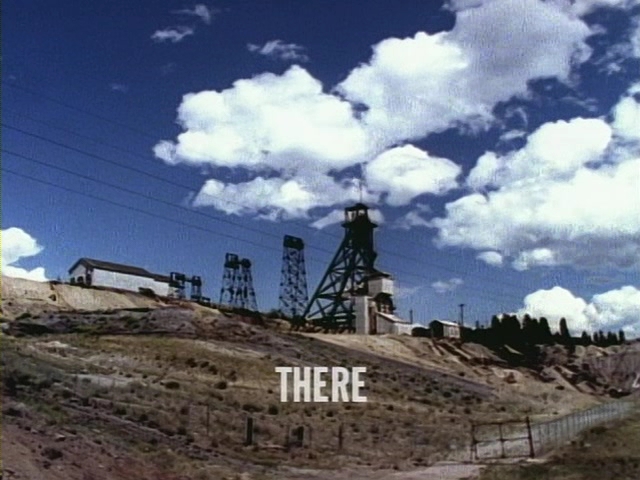 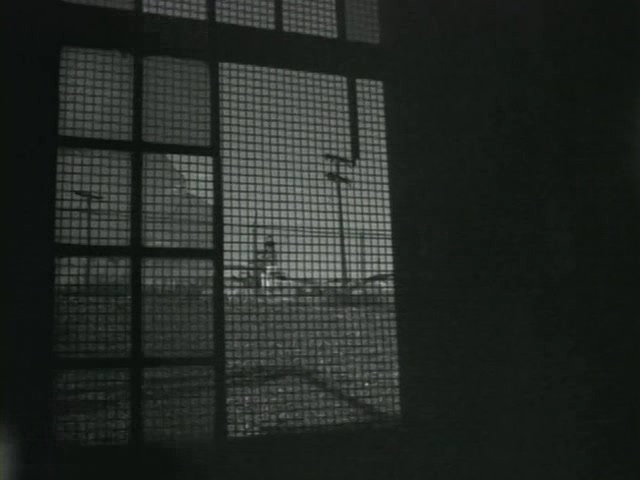 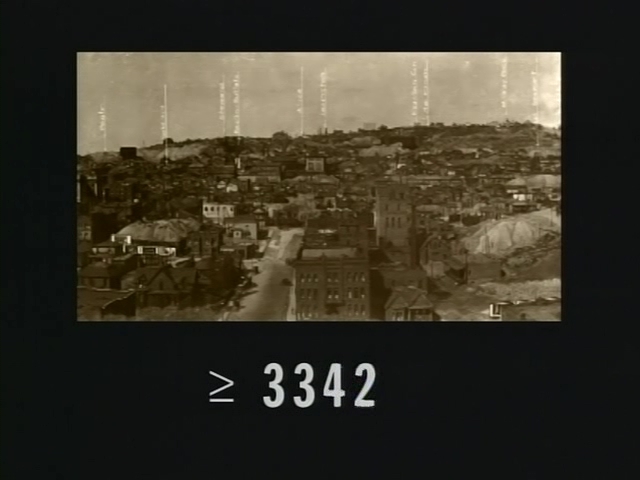 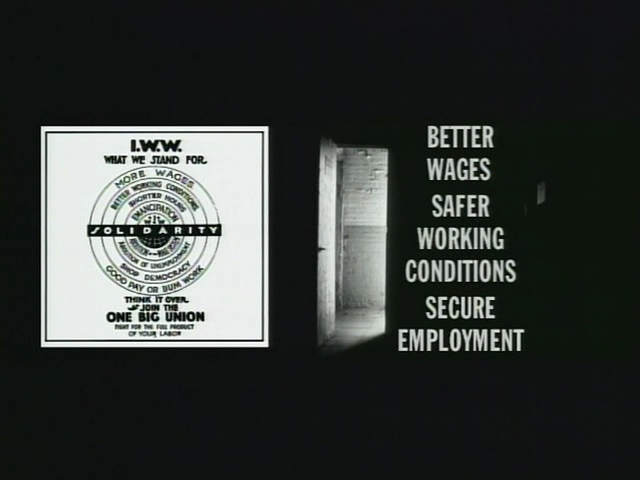 Quote:
Travis Wilkerson’s remarkable film, An Injury to One, offers a rich cultural engagement with the Wobblies’ history. It is not just that Wilkerson’s film is, inherently, a cultural project. He has also adopted a particularly cultural approach to his topic. Rather than offering a straightforward historical narrative of the Wobblies, organizer Frank Little’s life and death, and the class struggle in Butte, Montana, in the early 20th century, Wilkerson has chosen a more indirect, intuitive, and creative approach to these subjects. As he argues in the film, since so much of the historical documentation has been lost or destroyed, and since the dominant narratives which remain have been overwhelmingly shaped by the company, telling Frank Little’s story is a creative project, not only a piecing together of fragments of information and a reading between the lines of official accounts and against the grain of newspaper stories, but also a creative weaving of diverse sources that might not seem, at first or even second glance, to have a logical relationship to one another.

An inattentive viewer of this film is apt to feel overwhelmed by its bits of information, unidentified archival photos and contemporary images, grainy art work, and projections of fragmented text. There are occasional references to dates which seem almost random, song lyrics which are not directly connected to the film’s narrative, cartoons and posters which are not credited, and numbers whose significance are not fully explained. One is tempted to ask if this is the first “postmodern” labor history film. But there is considerable method to Wilkerson’s apparent madness, with interesting and effective results.

It is impossible not to get caught up in the sheer beauty of what he has created. The pacing, the sound, the colors, the text, the images, all meld into the antithesis of a disorganized mass of flotsam and jetsam. A rare beauty emerges and offers itself to the viewer. But there is no getting lost, absorbed, here. Wilkerson’s use of text, a sort of exaggeration of Brecht’s use of signage, pushes viewers to think for themselves, to follow not only the language but also the ideas, to think them over. He opens An Injury to One with a line-by-line, even word-by-word, representation of the first lines of the I.W.W.’s “Preamble”: “The working class and the employing class have nothing in common. . . .” The pacing and the placing of the text seem to encourage the viewers to chew over each and every word. At key points in the film, the spoken text, the projected text, the music, and the visuals are jarring in juxtaposition, yet the pace is always slow enough to leave time for thought.

At the same time, he presents his own work to pull disparate pieces together. Wilkerson’s weaving skills are, simply, stunning. Early in the film, he introduces the story of Dashiell Hammett and his hugely popular “noir” detective novel, Red Harvest, which is set in Poisonville, Hammett’s euphemism for Butte. At this point in the film, Wilkerson seems to be merely making a gesture to establish Butte’s location in American popular culture. Later, however, he picks the Hammett thread back up and weaves it together with other information to construct a compelling argument. He notes that Hammett’s close friend Lillian Hellman wrote that Hammett had revealed to her that, while he had been in the employ of the Pinkerton Detective Agency during World War I, the Anaconda Copper Company had offered him $5,000 to kill Frank Little. It was at this point, Hammett averred, that he had realized just how deep corruption had sunk its roots into American life. Late in the film, Wilkerson tells the story of a flock of geese who, caught in a storm in November 1995, landed in Lake Berkeley, a body of water one mile across and 900 feet deep, in Butte. Known locally as “the Berkeley Pit” (“idle like an open wound,” Wilkerson adds), this manmade lake is full of polluted water akin in its chemical composition to battery acid. It is the largest body of contaminated water in the United States. Hundreds of the geese died within a day or two. Butte had become, literally, the embodiment of Hammett’s “Poisonville.”7

Wilkerson counterposes and interweaves other odd bits of information to build his analysis. He wants viewers to work through the fog and miasma of official narratives to get at the core of Little’s story. In his narration, he repeats “It is said. . . . It is said” (by the Butte newspapers) that he was an “agitator,” that he practiced “sedition,” that he urged the miners to violence. But Wilkerson’s narration points out that the economic order created by Anaconda and protected by the local and state governments created the conditions in which 10,000 miners died from accidents, injuries, and illnesses. Mortality in Anaconda’s mines was higher than in Europe’s battlefields in World War I, Wilkerson notes, and, a bit later in the film, he adds that Anaconda earned some $25 billion in profits in Butte before abandoning the community and leaving it in its polluted state. When Wilkerson tells his viewers that the local newspaper reported that Little “described the image of a different world,” it is hard not to ponder what that “image” might have been and how it differed from the company-dominated community in which he met his death.

Among the one hundred Wobblies arrested for “sedition” in the wake of the strike, Wilkerson finds, ironically, an individual named “Joseph McCarthy”! When he first mentions this, the viewer might find this tidbit to be grist for a postmodern ironic reading. But later in the film Wilkerson returns to the theme of McCarthyism and the influence of the Wisconsin red-baiter in the 1950s. Dashiell Hammett himself was arrested and jailed in 1951 by McCarthy’s Senate Committee for refusing to name names. The narration suggests that it was in the wake of this experience that Hammett made his confession to Lillian Hellman about having been offered $5,000 in 1917 to kill Little. Cryptically, powerfully, Wilkerson adds: “Sometimes in complex minds it is the plainest experience that speeds the wheels that have begun to move.”

Wilkerson seems unsatisfied to connect only corporate domination to government repression, local repression to national repression, labor history to environmental history, popular culture to the history of class struggle. He must also tell this story in a way that connects the past and the present. He brings his viewers into contemporary Butte, offers odd, touching images of residents at work and play, and tells us that “despite everything the town endures.” Based on his story of the wayward geese, however, he suggests that, despite the destruction of documents, the silencing of witnesses, and the pall of repression, “history cannot be so easily expurgated.” The geese themselves are “directing us to the scene of a crime.”

In the end, Wilkerson closes, the story of Frank Little’s murder demonstrates how “an injury to one” is, fundamentally, essentially, critically, “an injury to all.” 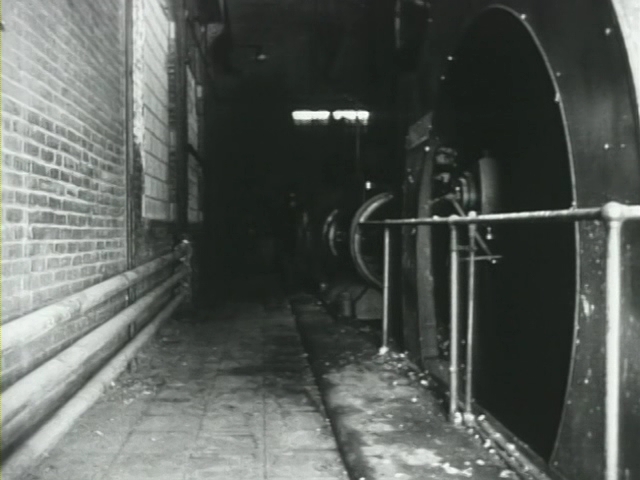 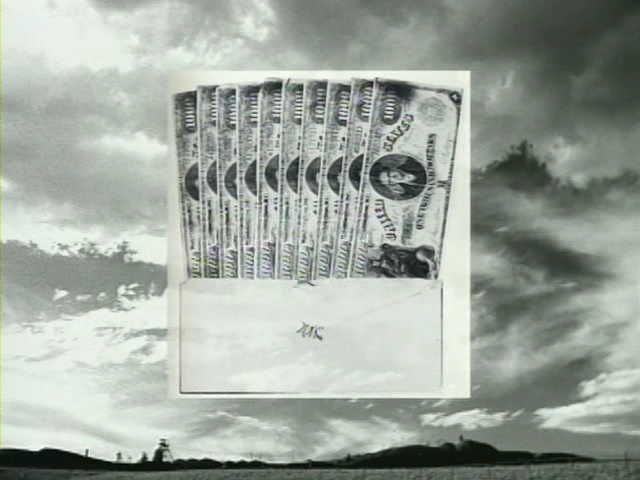 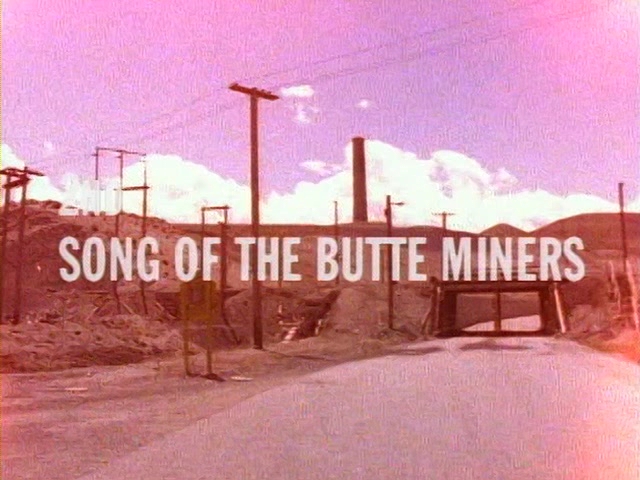