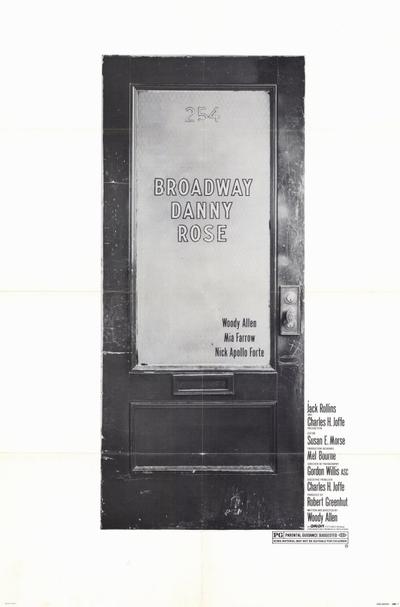 “A smaller, amusing comedy from writer/director Woody Allen, Broadway Danny Rose begins with a bunch of show business vets sitting around a table at New York’s Carnegie Deli and reminiscing about the legendary titular character, a loser of an agent who would represent anyone, including blind xylophonists, piano-playing birds, and has-been crooners with drinking problems. Allen plays Rose as a befuddled, warm-hearted schlub who finally has a shot at getting somewhere when he signs washed-up lounge singer Lou Canova (Nick Apollo Forte) and nearly brings his career back to life. Danny gets him a date at the Waldorf, where Milton Berle is in the audience, looking for guests for his TV special. Canova has a complicated love life, juggling both a wife and a girlfriend. so he enlists Danny to take the girlfriend, Tina Vitale (Mia Farrow), to the concert. But Canova and Tina have a fight, she goes back to her Mafioso boyfriend, and Danny winds up getting chased halfway around New York and New Jersey by the Mob. And of course, once Canova gets his big break, he dumps Danny for another agent. Allen, Forte, and especially Farrow all do strong work with characters that could have easily become stereotypes, and the film has a lighter, warmer touch than the Allen films that preceded it (Stardust Memories and Zelig).

One of the best films from Woody Allen’s underrated early ’80s period, Broadway Danny Rose immediately suggests the slightness of A Midsummer Night’s Sex Comedy but eventually reveals itself as a more substantive work thanks largely to Allen’s performance in the title role. As an actor, Allen may be capable of offering only minor variations on the persona developed in his stand-up routine, but here he comes up with one of his most poignant — a man kept from the bigtime not from some inherent flaw but through his own selflessness. The film also allows Mia Farrow a good deal more freedom than she has been granted in any other Allen outing: too much, it might be argued, during her gangster moll character’s broader moments, but she manages a funny performance nonetheless. A borderline slapstick climax doesn’t quite work, but by that point it doesn’t quite matter: Allen has crafted a film that’s immediately charming and, in the end, unexpectedly moving.”