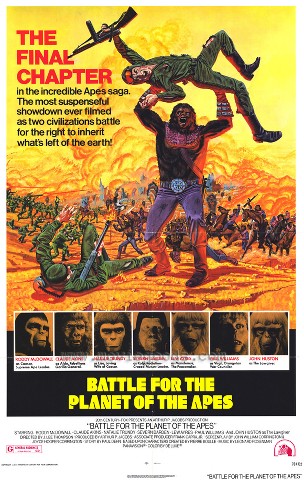 Quote:
The fifth and last of the original series of motion pictures based upon author Pierre Boulle’s imaginative novel Monkey Planet, this science fiction film was the least-liked by the series’ legion of fans. Roddy McDowall returns as Caesar, the rebellious intelligent chimp of the previous film, Conquest of the Planet of the Apes (1972). Caesar led his brethren in a revolution against their human masters earlier, but humanity has since nearly destroyed itself in a nuclear apocalypse, and survivors are second-class citizens within ape society. Now a beneficent ruler of his people, Caesar encourages a fragile, peaceful coexistence with humans, despite the protests of militaristic gorilla leader General Aldo (Claude Akins). When Caesar learns that recordings of his murdered parents may exist in the Forbidden City, he journeys to the irradiated wasteland with the human MacDonald (Austin Stoker) and the wise orangutan Virgil (Paul Williams). Although Caesar finds what he’s looking for, he also attracts unwanted attention: mutant humans who still dwell underground in the devastated war zone follow the search party back home, leading to a climactic battle and Aldo’s tragic challenge of Caesar’s authority. Suffering greatly due to penny-pinching studio 20th Century Fox’s low budget, Battle for the Planet of the Apes (1973) is most notable for a cameo by director John Huston as an ape named “The Lawgiver,” who appears in a wraparound segment. ~ Karl Williams, All Movie Guide