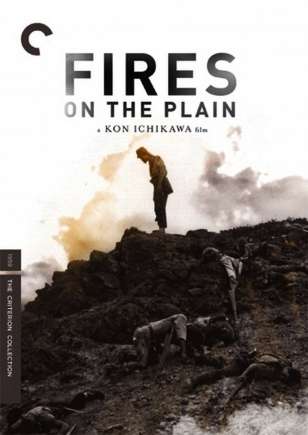 An agonizing portrait of desperate Japanese soldiers stranded in a strange land during World War II, Kon Ichikawa’s Fires on the Plain (Nobi) is a compelling descent into psychological and physical oblivion. Denied hospital treatment for tuberculosis and cast off into the unknown, Private Tamura treks across an unfamiliar Philippine landscape, encountering an increasingly debased cross section of Imperial Army soldiers, who eventually give in to the most terrifying craving of all. Grisly yet poetic, Fires on the Plain is one of the most powerful works from one of Japanese cinema’s most versatile filmmakers. (Criterion)

Timeless and unforgettable, Kon Ichikawa’s Fires on the Plain ranks highly among the most potent anti-war films ever made. Freely adapted from the 1952 novel by Shohei Ooka and set on the Japanese-occupied Philippine island of Leyte in February of 1945, the film presents a horrific landscape that instantly conveys the nightmarish conditions that existed during the final days of World War II. With a ghostly pallor, sunken eyes, and a case of tuberculosis that has isolated him from his fellow soldiers, the ragged and desperately hungry Tamura (Eiji Funakoshi) has orders to kill himself with a single grenade if he can’t find medical attention at a nearby field hospital. Instead he wanders among stinking corpses, through abandoned villages where feral dogs pounce out of nowhere, and eventually encounters two skeletal comrades who are equally desperate to survive. As each of these men is drawn to an inevitable fate, Ichikawa (in close collaboration with his screenwriter wife Natto Wada) strips away any hint of political ideology, focusing on the physical and emotional devastation of survivors to illustrate, in Ichikawa’s words, “a total denial [and a] total negation of war.” Nearly 50 years before Clint Eastwood tapped into similar themes in Letters from Iwo Jima, Ichikawa was denouncing war with uncompromising bluntness that included (for the first time in a Japanese film) an acknowledgement that cannibalism occurred amidst other wartime atrocities. (In the film it’s an indirect reference, but powerful nonetheless.) The result is a raw and powerful experience that fixes itself in your memory. Criterion’s 2007 DVD release includes an informative 2006 video interview with renowned Japanese-film expert Donald Richie, video recollections (from 2005) featuring Ichickawa and actor Mickey Curtis, and a comprehensive booklet essay by film critic Chuck Stephens. (-Jeff Shannon – Editorial Reviews – Amazon.com)