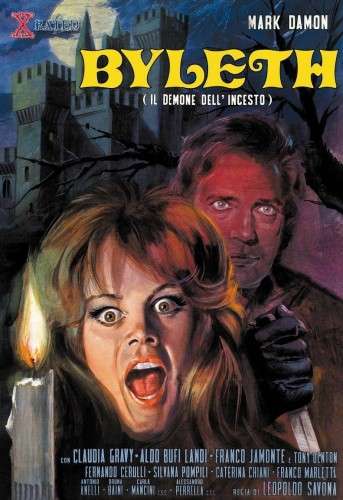 The young Duke Lionello Shandwell (Mark Damon) morbidly loves his sister Barbara (Claudia Gravy), and when he learns Barbara is married Giordano, a middle-age man, his jealousy becomes explosive, trying to separate the consorts in every way. In the meantime some mysterious crimes are followed (victims are all women, killed with a three-points blade), so the whole village is stunned. Blood’s ceremonies, insane love and incestuous relationships are the dominant elements in this film. As for its artistic value, Byleth still manages to surprise, since it represents the first genre film convinced from a perfectly pure movie-buff-like point of view, besides the incestuous thematic had not been documented on this way in an Italian horror movie. The rare German version I dubbed in Italian language is totally uncut and 82 minutes longer, instead Italian VHS version is 80′.