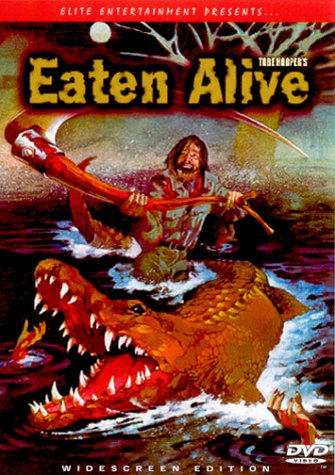 Description: A wild mix of surreal fantasy and grindhouse splatterfest, Tobe (The Texas Chainsaw Massacre) Hooper’s 1976 sophomore feature pits an all-star cast against the homicidal owner of a backwoods hotel and his pet crocodile, with expectedly bloody results. Veteran character actor Neville Brand gives a memorably eccentric performance as the deranged hotelier, whose unpredictable rages frequently end in the violent death of his guests; Mel Ferrer is the inquisitive father of one victim, Robert Englund is a lusty local yokel, and William Finley and Marilyn Burns (Chainsaw’s heroine) are a married couple on the verge of a meltdown who make the mistake of renting a room from Brand. Naturally, Brand’s homicidal impulses get the better of him, and the film’s finale nicely echoes the sheer bedlam of Chainsaw’s final act, with all parties (including Stuart Whitman as a very laid-back sheriff) struggling to escape Brand and his croc with all body parts intact. While Eaten Alive never hits the same nerve-jangling heights of terror as its predecessor, Hooper does bring considerable style and verve to its crazy-quilt story, most notably in its garish lighting scheme, which suggests the exaggerated panels of ’50s horror comics. And horror fans who don’t mind a dash of black humor with their grue will appreciate Brand’s stream of consciousness mutterings, as well as the cat-and-mouse game conducted by Finley and Burns’ daughter (Kyle Richards) and the monster croc under the hotel.