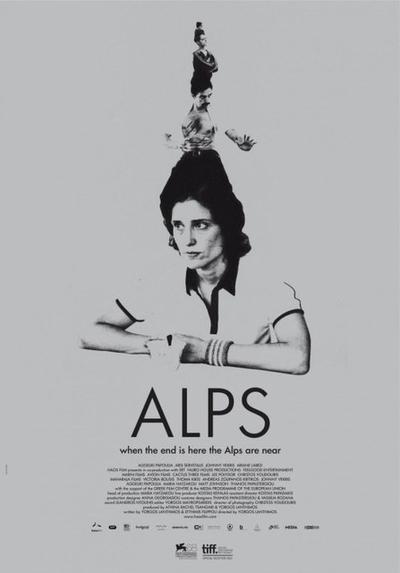 Synopsis
A nurse, a paramedic, a gymnast and her coach have formed a service for hire.
They stand in for dead people by appointment, hired by the relatives, friends or colleagues of the deceased. The company is called Alps.
Their leader, the paramedic, calls himself Mont Blanc. Although Alps members operate under a discipline regime demanded by their leader, the nurse does not.
alpsfilm.gr

Reviews
Life is a baffling but also intriguing imitation of itself in Greek director Yorgos Lanthimos’ follow-up to well-received arthouse hit Dogtooth. Scarcely less bizarre than that droll excursus about a family that lives, loves and even speaks at one surreal remove from the rest of the world, Alps denies us such traditional cinematic handholds as rounded characters with backstories; a plot with an identifiable moral arc; neatly tied narrative ends; an easy-to-read ‘message’. Yet the film only very occasionally feels like a piece of self-indulgent arthouse mystification: most of the time, this story of a team of melancholy, oddball characters who help (or profit from) the bereaved by standing in for departed loved ones holds us emotionally and intellectually – and ends by saying something profound about a world in which ‘reality’ is just another TV format…
Lee Marshall, Screen Daily.com

Alps is a film peculiar beyond all understanding, based on a premise that begs belief. It takes itself with agonizing seriousness, and although it has the form of a parable, I am at a loss to guess its meaning. Yet I was drawn hypnotically into the weirdness…. Although Alps is provocative and challenging, it is so completely self-contained that it has no particular emotional payoff. There is no greater world in which to evaluate its contents. When mourners are comforted by therapists who propose to represent the loved one, you’d think deep feelings would be stirred up. But Alps has the effect of a sterile exercise.
Roger Ebert, Chicago Sun Times

…Both a companion piece to and in many ways a reversal of Dogtooth, Alps finds Lanthimos building on that film’s surreally terse style and notions of communication and identity without diluting its singularity or concentration. Working with cinematographer Christos Voudouris, he composes his images (with characters frequently decapitated by off-center framing or liquefied into out-of-focus background forms) to conjure up an atmosphere of dread that hangs over even the most deceptively tranquil scenes. By swathing every relationship in layers of hierarchical pretense and distortion, Lanthimos envisions social order itself as a continuous performance, an existential variation of Shakespeare’s dictum about the human race as players on the world’s stage…
Fernando F. Croce, Slant Magazine

…Like Dogtooth, Alps works by systematically unsettling our sense of what is normal and habitual in human interactions. Would grieving parents or spouses really be comforted by the performances of the Alps, whose services they seek out and pay for? It is both an obvious question and one the film waves away. To appreciate what Mr. Lanthimos is doing —to accept his invitation to rethink some very basic assumptions about identity and feeling — you need to accept his peculiar and suggestive premise…
A.O. Scott, NY Times

It’s all too easy to get lost in Alps, a deadpan, absurdist ghost story of sorts from the ingenious Greek director Yorgos Lanthimos. Even the title is a bit of a decoy. No sooner have the lights dimmed than we are pitched, without a map, into a landscape that is not steep and snowy but flat and black. But follow the film-maker. Let him lead you by the nose. Lanthimos knows exactly where he’s going.
Xan Brooks, Guardian