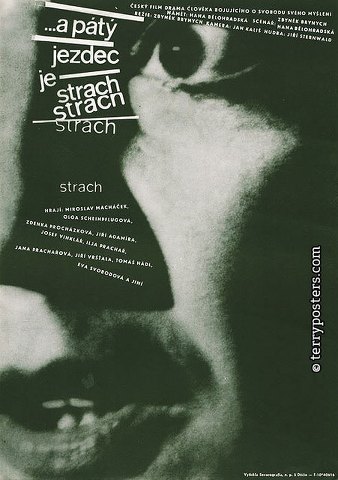 Renata Alder, The New York Times wrote:
So beautifully and thoughtfully made — well written and acted, shot with perfect economy and care—that one is almost surprised at the end to be very much moved by the substance of it.”

In Nazi-occupied Czechoslovakia a Jewish doctor Dr. Braun, forbidden to practice, has to remove a bullet from a wounded Resistance fighter. He roams the nightmarish Prague streets in a desperate search for morphine while hiding his patient from the Nazis. In a world where people are encouraged to report on anything out of the ordinary, it is only a matter of time before his covert activities are brought to the attention of the authorities.

Film Walrus wrote:
“The Fifth Horseman is Fear” was made in 1964, when a thinly veiled critique of the network of informants and the politics of fear was still possible. Director Zbynek Brynych sets the film during the German occupation at an apartment that is sheltering an injured fugitive.

Dr. Braun is a mid-level bureaucrat working at a warehouse for confiscated Jewish property. When we are first introduced to him, he is wandering through cavernous rooms dedicated to furniture, dishware, books, clocks, musical instruments, etc. Like the photos of shoes and human hair from Holocaust camps, they have a devastating impact because of the vast loss of humanity they imply. Part of Brynych’s evocative, bittersweet tone comes from the way he films such horror with deft beauty.

Amos Vogel wrote:
Special note must be made of those courageous Czech films that preceded the Dubcek era, yet raised controversial questions or created embarrassing analogies. This expressionist, semi- surrealist drama of betrayal, cowardice, and heroism in a totalitarian state probes the varieties and limits of human behavior under extreme conditions in brilliantly conceived sequences of hypnotic power. Telling the story of a Jewish doctor, unexpectedly confronted with a frightful choice, it raises basic questions. The oppressors, ostensibly Nazis, wear no uniforms; the events, ostensibly occurring during the last war, in fact take place in a timeless and therefore universal reality, reinforcing the film’s oppressive topicality. The locate may be Prague; the theme is fear.