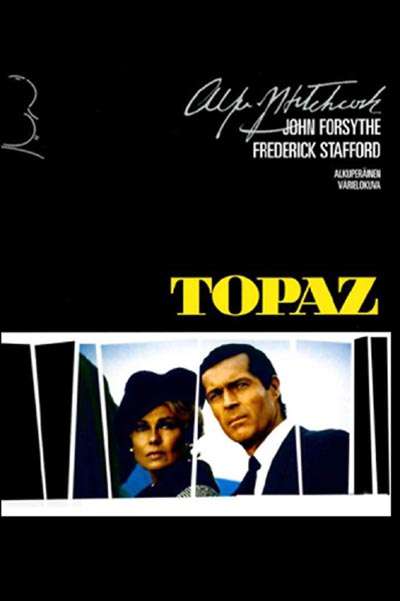 After managing to get hold of some seriously damaging papers from the visiting Cuban official Rico Parra (John Vernon), in New York to appear at the United Nations and staying in Harlem to show solidarity with “the masses”, sneakily of course, a concerned Devereaux jets off to Cuba and catches up with his mistress Juanita de Cordoba (Karin Dor), who is now secretly involved with a local underground movement whilst also being involved in another way with Parra. Parra finds out and kills Juanita in a highly stylized memorable scene. Devereaux then is recalled to Paris, where he attempts to get to the bottom of this whole leak problem. Michèle wants to reconcile her parents.

Nicole cheats on André after his Cuban affair with the man who proves to be the leader of the spy ring, “Topaz”, Jacques Granville (Michel Piccoli), their old friend from their days together in the French Resistance. François goes on to find out who “Topaz” is by interrogating NATO official Henri Jarre (Philippe Noiret). A short time late Michèle finds the murdered Jarré – and François is missing. A short time later François arrives at Michèle and her parents and shows her a drawing of Jarré. Nicole knows him and tells André, that Granville is the head of “Topaz”…

In the original ending, there was a duel between André and Jacques. This was panned by audiences, and Hitchcock changed the ending. Another rejected ending had Jacques escaping.