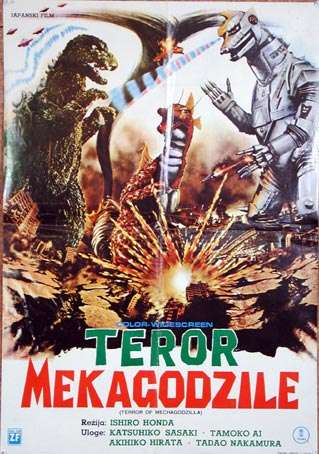 Plot Synopsis by Jason Buchanan
A race of malevolent aliens bent on world domination unleash the ultimate weapon of destruction on mankind, leaving them with no hope for survival but the power of the mighty Godzilla. Their galaxy dying, the endangered aliens discover a planet that could save them from extinction if it wasn’t already populated. In order to solve that significant problem, the scheming extraterrestrials construct Mechagodzilla, a 400 foot destroyer of worlds armed with powerful lasers and guided missiles. As Godzilla prepares to face off against his powerful intergalactic doppelganger, the traitorous Professor Mafuni lends his genius to the aliens to create the mighty Titanosauraus. Titanosauraus is a massive amphibious dinosaur that Professor Controls via a biomechanical connection with his android daughter Katsura. But just as it begins to appear as if all hope has been lost for both Godzilla and the human race, Interpol agents discover that Titanosauraus has one weakness that may give the Godzilla the crucial edge that he needs in order to emerge victorious.