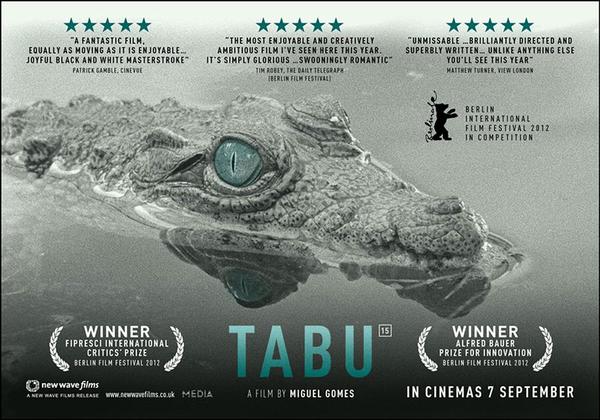 Synopsis:
A temperamental old woman, her Cape Verdean maid and a neighbour devoted to social causes live on the same floor of a Lisbon apartment building. When the old lady dies, the other two learn of an episode from her past: a tale of love and crime set in an Africa straight from the world of adventure films.

Tabu is a fine film by any measure, but it should be said, Gomes is to be commended for making a significant leap in a new direction following the equally but differently odd Our Beloved Month of August. While that film was sprawling and discursive, Tabu is a tight fiction that explores a set of very specific parameters within a tight but elegant superstructure. The film is divided in unequal halves (the second part, “Paradise,” is longer than the first, “Paradise Lost”), both linked not only by one primary character but by history and fate. “Paradise Lost” is centered on Pilar (Teresa Madruga), a middle-aged woman living in an apartment complex. She tried to be Christian, so she does what she can to help her next-door neighbor Aurora (Laura Soveral), who is senile and paranoid. She thinks that Santa (Isabel Cardoso, “Clothilde” from Colossal Youth), the Cape Verdean woman her daughter has hired to look after her, is trying to kill her. Once she becomes gravely ill, Aurora asks Pilar to help her find one person, Gian Luca Ventura (Henrique Espírito Santo), from her old days. She finds him, but he arrives too late.

At this point, Ventura essentially delivers the “Paradise” section as a monologue while Gomes shows us Aurora’s life in the colonies as a silent film. While all of Tabu is black and white and 4:3 academy ratio, the shift from present to past is jarring to say the least. We are shown the tragic love affair that the young Aurora (Ana Moreira) developed with Ventura (Carloto Cotta), a friend of her husband (Ivo Müller) while they were living on a vast African colonial homestead at the foot of Mt. Tabu. But more than this, Tabu displays, without a single wink of irony, the oblivious pleasures to be had as a colonial dweller at the height of Empire (Portuguese or any other). Aurora is exceedingly sweet on her pet baby crocodile, which in many respects is emblematic of unreflective ownership of Africa that is the backdrop, and precondition, for all of Aurora’s romance and transgression. While so many other Portuguese films have been quite curiously engaged with this end-of-empire theme (Birds, Last Time I Saw Macao), Tabu does not announce itself as a critique. Rather, the fate of Aurora – “kept” by the black Santa, weak and powerless, confined to a small Lisbon flat – is compared to her” glorious” past, to demonstrate rather directly the raw seduction of this “white man’s burden.” The fact that Gomes imbricates and implicates cinema itself with this Western fantasy only shows Tabu’s deep sophistication.