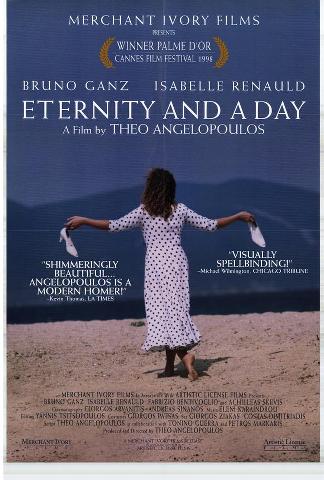 Synopsis
rottentomatoes.com wrote:
Eternity And A Day traces the final days of Alexandre (Bruno Ganz), a celebrated Greek writer who is terminally ill, as he prepares to leave his seaside home forever. While packing, he finds a letter from his long-dead wife, Anna (Isabelle Renauld), who wrote about an enchanted summer day they spent thirty years ago. From that point, Alexandre embarks on a mystical journey through his past and present.

nytimes.com wrote:
“Eternity and a Day” won an overdue Palme d’Or at last year’s Cannes International Film Festival for the Greek director Theo Angelopoulos, whose style of drifting metaphysical reverie is at its most accessible here. All things being relative, this is a dreamy, lulling film but also a more concise and straightforward one than the magnificently grandiose “Ulysses’s Gaze”, the Angelopoulos opus that directly preceded it. “Eternity and a Day” is simpler, the haunting poetic valedictory of an artist whose memory leads him across the landscape of his life during his last day on earth.

This filmmaker’s eloquent, abstract, trance-inducing work so eschews the mundane that it can barely be watched in any earthbound way. So at the screening I attended, a man who had shown signs of vigor as he entered the theater began conspicuously fighting sleep as the film got under way. Take that as an indication of the film’s method, not its merit: Mr. Angelopoulos’s meditation on the meaning of one man’s life is genuinely hypnotic in its way of transcending ordinary narrative. The camera casts a spell as it wanders gravely through the central character’s most essential thoughts.

The main role in ”Eternity and a Day,” that of a soulful, weary pilgrim named Alexandre who has deep ambivalence about his past, was meant to be played by Marcello Mastroianni, who grew too ill to undertake the film. Instead, it is played by Bruno Ganz, who gives it a palpable sense of the weight of this man’s experience. Language is so secondary to image and memory here that it makes little difference to learn that Mr. Ganz’s performance was delivered in German and dubbed into Greek. He brings the quiet authority of a man patiently, fearlessly searching for his life’s final meaning.

Characteristically, Mr. Angelopoulos erases all temporal and spatial boundaries as Alexandre roams through the film. His long-dead wife appears as a young woman; she is about the same age as Alexandre’s grown daughter, who has just decided to sell his family’s ancestral home where so many of Alexandre’s most primal experiences occurred.

His mother is both a fading wraith and a strong voice speaking to Alexandre in his boyhood. His work as a writer remains unfinished, just as his links to loved ones now seem incomplete, yet Mr. Ganz projects the character’s deep acceptance of what he has done and been. In the course of his wanderings, he is joined at times by a young Albanian boy whose more political exile mirrors Alexandre’s spiritual condition.

Figures appear unexpectedly in the light gray mist that cloaks part of the film, or at the seaside where its more joyous, distant memories come to life. Like Ingmar Bergman, whose sense of an intricately interwoven present and past is echoed in such a fluid, liberating way here, Mr. Angelopoulos gradually turns the whole of his protagonist’s life into something far greater than the sum of its parts. Eventually Alexandre is ready to ask, “Tell me, how long does tomorrow last?” And the filmmaker is ready to conjure one last transcendently beautiful image of love and farewell.