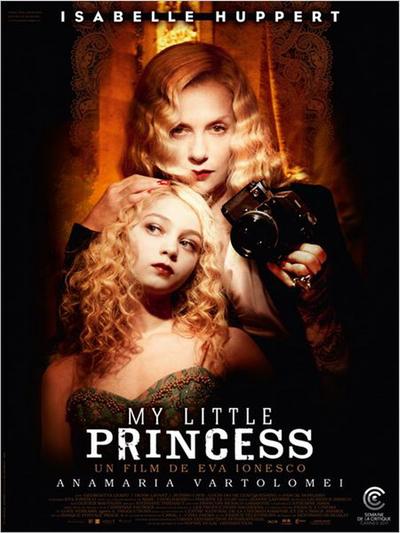 Hannah and Violetta are an odd couple: an elusive mother and a little girl in search of maternal love, a fanciful artist and her reluctant model.
When Hannah asks Violetta if she would like to be her model, her life with her loving grandmother is turned upside down. From a normal childhood to muse of the trendy Paris art scene…

[SPOILER]Review:
Being hatched from her own difficult childhood experience as a misused muse for her photographer mother doesn’t lend authenticity, coherence or genuine feeling to actress-turned-director Eva Ionesco’s My Little Princess. Dominated by an archly affected performance from Isabelle Huppert in her worst high-manic mode (think Jennifer Saunders’ Absolutely Fabulous character in a humor vacuum), this overwrought drama about a spotlight-seeking Madame Frankenstein and her Lolita monster becomes increasingly risible.

No relation to Theater of the Absurd pioneer Eugene Ionesco, the director is the daughter of Irina Ionesco, whose provocative nude photographs of her child made waves in the Paris art world of the 1970s. Ionesco says her mother started shooting her from age four, but the child in the film is 10, no doubt to tone down the distastefulness of showing a girl of that age being grotesquely sexualized. Depiction of the actual photographs is relatively restrained, with nudity confined to older models.

The story could certainly be the basis for an intriguing psychological drama, but this isn’t it. Lip service is paid to questioning the boundaries between art and pornography, but mostly this is just a lurid clash between overbearingly theatrical mama diva and petulant baby diva.

Ionesco’s command of tone is too shaky to make the emotional stakes remotely serious, so despite its grounding in reality, the movie plays like something cobbled by hacks out of Pretty Baby, Auntie Mame, Mommie Dearest and Velvet Goldmine. Actually, that makes it sound kind of fun, but don’t be fooled.

Winsome Violetta (Anamaria Vartolomei) is living contentedly with her God-fearing great-grandmother (Georgetta Leahu) when her eccentric mother Hannah (Huppert) resurfaces after one of many prolonged absences. Dressed like a crazy lady with a ‘40s Hollywood fixation, Hannah swans around in floor-length satin gowns, furs, feathers, elaborate jewels and hats.

Violetta finds her mother’s outre glamour captivating, so she submits readily when Hannah takes up photography and asks her to pose in frilly period garb. The pictures quickly transition from haunted damsels into more overtly sexual territory as Violetta is pushed to drop her bourgeois inhibitions. Overnight, Hannah is hailed as the high priestess of morbid eroticism while Violetta, sent to school dressed like a poptart flapper, becomes the class pariah.

During a trip to England to photograph a punky glamrocker (model Jethro Cave, channeling a louche version of his dad, Nick Cave), Hannah encourages Violetta to shed more clothes and get more physical in their pictures together. But Violetta balks at her requests, setting into motion an escalating love/hate battle between mother and daughter.

A child being exploited by such an egomaniacal parent should spark automatic sympathy. But Ionesco remains curiously detached from the psychological impact on Violetta, focusing more on her tantrums and preening affectations than her lost innocence. Seldom disturbing, the conflict more often veers into silliness, especially when Violetta’s flouncing self-dramatization starts making Mom look stable.

The threat of legal intervention when Hannah is accused of being an unfit mother is introduced too late and too clumsily to acquire any urgency. (She turns up to the social worker interview draped in chain mail like Theda Bara, with Violetta looking like a Mack Sennett girl, so it almost seems as if she wants to lose custody.) The revelation of nasty secrets from the past about Hannah’s mother is just one tawdry note too many.

Ionesco and co-scripters Marc Cholodencko and Philippe Le Guay bring a chaotic story sense to the material and remarkably little evidence of personal investment for an autobiographical drama. Perhaps it might have worked better with a more stylized approach of heightened realism, but the filmmaking is at best pedestrian, at worst inept. What’s most peculiar is Ionesco’s use of music, with Bertrand Burgalat’s ‘70s-inflected score evoking everything from goofy comedy to Just Jaeckin softcore slush to Hammer House of Horror.

If only the film were from that schlock stable, then somebody might sink a meat cleaver into Hannah’s skull and silence this supremely irritating character. Vartolomai is not called upon to do much beyond pout and vamp in inappropriate outfits, but trying to convey any kind of bond with Hannah would defeat the most resourceful of actors. Huppert’s psychotically fussy performance might as well be happening in a void.[SPOILER]