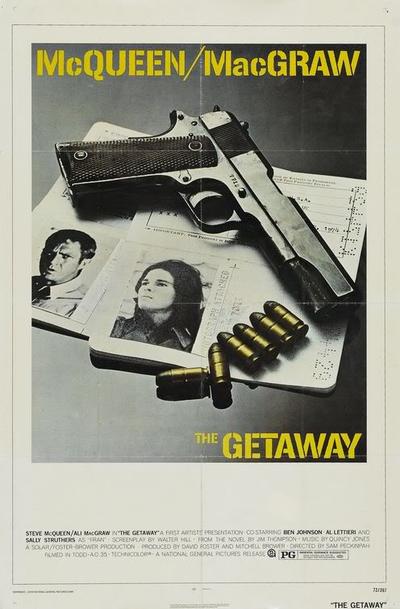 In Sam Peckinpah’s version of Walter Hill’s script, from Jim Thompson’s novel, an ex-con and his wife go on the lam after a Texas bank heist. Denied parole after four well-behaved years, Doc McCoy (Steve McQueen) sends his wife Carol (Ali MacGraw) to dirty politician Jack Benyon (Ben Johnson) to get him out of prison. Carol secures Doc’s freedom, on the condition that he does one more bank job for Benyon. Doc and his accomplices Rudy (Al Lettieri) and Jackson (Bo Hopkins) get the cash, but Doc soon discovers how Rudy intends to keep it all for himself and how Carol convinced Benyon to get him sprung. While Rudy hijacks a veterinarian and his wife (Sally Struthers) to take him to get Doc in El Paso, Doc and Carol make their own embattled way south with the money, threatening to desert each other before reaching a trash dump rapprochement after a harrowing garbage truck episode. All sides converge in El Paso for a shootout, but trust a happily married old-timer (Slim Pickens) to help Doc and Carol have a future. With violence shot in his trademark balletic style, Peckinpah does not hide the damage that Doc can do, whether to a cop car or an enemy. Still, as in such other morally relative outlaw movies as Bonnie and Clyde (1967) and Peckinpah’s western The Wild Bunch (1969), Doc may be a criminal and killer when necessary, but his and Carol’s loyalty to each other elevates them above their crooked milieu. With its non-traditional traditional couple played by the then hot (and notoriously adulterous) stars McQueen and MacGraw, The Getaway was a substantial hit. It was lackadaisically remade with Alec Baldwin and Kim Basinger in 1994..