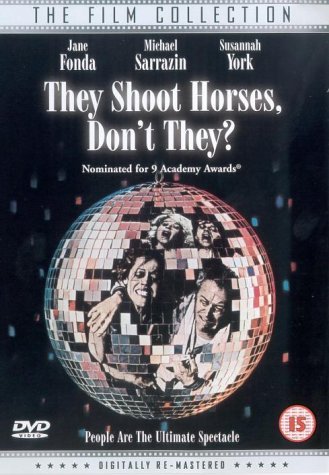 Quote:
They Shoot Horses Don’t They? is set in the dark years of the l930s, when dance marathons became popular as a way for desperate people to compete for prize money. Sometimes the events would drag on for weeks as contestants pushed themselves far beyond the point of physical, mental and emotional exhaustion, the dancers shambling around the floor in a half-dead stupor. People would then pay to sit in the bleachers, watch the event and cheer on their favourites. Taken from hard-boiled pulp writer Horace McCoy’s novel of the same name, Jane Fonda plays a bitter young woman paired up with Michael Sarrazin for the ordeal. Gig Young portrays the unctuous MC of the event, bringing equal parts compassion and sleaze to his role. Many of the film’s images are unforgettable, such as “the derby”, a heel-and-toe race around the dance floor with bouncy, light-hearted music to accompany the miserable spectacle. It’s a powerful, tragic period piece that reminds us of the privations of the Great Depression. In the largest sense, the film has existential overtones that go far beyond the story of enervated dancers staying on their feet for a month or more. This film brought home a string of Academy Award nominations for the cast and director Sydney Pollack and a win for Young.