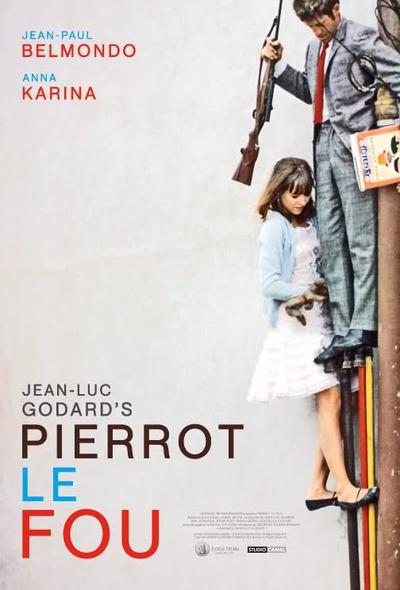 Plot Outline :
Ferdinand Griffon is married with his wealthy Italian wife and has been recently fired from the television where he worked. His wife forces him to go to a party in the house of her influent father that wants to introduce Ferdinand to a potential employer. Her brother brings the babysitter Marianne Renoir to take care of their children. Ferdinand feels bored in the bourgeois party and borrows his brother-in-law’s car to return home. He meets Marianne, who was his lover five years ago and insists to call him Pierrot, and offers to take her home; however, he spends the night with her and finds that she is involved in smuggling weapons. When Marianne is chased by terrorists, they decide to travel to the beach without any money, leaving Paris and his family behind in a crazy journey to nowhere.

PopMatters Review :
Godard’s distinctive cinematic style was clearly inspired by the Italian neorealist movement which denounced the poor moral and economic conditions that surrounded the country during the years that followed World War II. Furthermore, Godard not only infused his films with an incisive political and social commentary, but quite often he also challenged and ridiculed established cultural icons and artistic conventions. In this regard, few would deny that Pierrot Le Fou (1965) is his most innovative, iconoclast, and subversive film to date.

As Godard has confessed on numerous occasions, by the early 1960s he wanted to make a movie based on the crime novel Le Demon D’Onze (aka The Eleven O’clock Demon or Obsession) by influential writer Lionel White. This book relates the story of a respectable family man who leaves everything to follow a much younger girl on a path of adventure, discovery, crime, and ultimately, self-destruction.

Godard originally envisioned making a black and white, Hollywood genre style, film noir. And at some point in time, he imagined a cast led by Richard Burton and Anna Karina (who at the time was Godard’s wife). However, the unavailability of Burton and other middle-aged actors ultimately propelled Godard to hire a young and popular French heartthrob, Jean Paul Belmondo. As a consequence, the project that Godard had originally intended to be a Lolita-type of film became “the last romantic comedy”, as Godard used to refer to it.

Quite ironically, by the time Godard was able to shoot Pierrot Le Fou, he and Karina had separated. In addition, Godard felt a disdain for Hollywood genre pictures, allegedly because of his repudiation of the US entering the Vietnam War. Clearly, this was a troublesome period for Godard, and his personal and political apprehensions and disappointments were appropriately translated and encoded into Pierrot Le Fou.

Pierrot Le Fou follows quite closely the narrative of White’s Le Demon D’Onze. That is, Belmondo plays Ferdinand, a family man who runs away with Marianne (Karina), the baby sitter. Ferdinand and Marianne go on a criminal rampage, and along the way they encounter a variety of adventures and amusing situations. Ferdinand’s actions are motivated as an act of liberation, to escape the tight grip of modern life’s standards and expectations. As revealed during the film, Ferdinand expects that such a breakout from society will eventually allow him to express his artistic abilities without artificial restrictions. However, Ferdinand’s apocalyptic fate is an inescapable path of self-destruction.

As many critics and scholars have observed in the past, Ferdinand is no other than Godard’s alter ego. And such a conclusion is rather obvious by looking at the role of Marianne. Consider how, after a short honey moon as runaways from society and justice, Marianne constantly whines and complaints about Ferdinand’s artistic aspirations. Clearly, Godard is using the film to criticize the alleged unsupportive attitude of Karina before their divorce. Similarly, Godard displays his political ideology in a scene where Ferdinand and Marianne make fun of the Vietnam Conflict.

Furthermore, Godard wanted to use Pierrot Le Fou as a manifesto against the stiff and arbitrary generic conventions that characterized the Hollywood film. As the legend goes, Godard made Pierrot Le Fou using an incomplete draft of the script. The result is an obviously improvised film that exudes a clever sense of spontaneity. By placing more emphasis on the power of the image, and relegating the narrative to second place, Pierrot Le Fou could be best described as an impressionistic film. Indeed, the power of Godard’s film is not based on the cognitive processes it promotes in the viewer, but on its unshakable raw visual impact.

Such an aesthetic ideology is rather evident and easy to appreciate in Godard’s film. That is, Pierrot Le Fou mostly consists of an array of colorful images, most of them emphasizing shades of red, put together by elegant editing. In this regard, Pierrot Le Fou has many scenes that convey true aesthetically pleasure, but they are utterly meaningless from a narrative context. As a matter of fact, they actually interrupt the flow of the storyline. In this regard, the beautiful and enigmatic scene where Marianne is holding a pair of scissors in front of the camera has become a true symbol of avant-garde cinema.

Furthermore, some of the scenes in Pierrot Le Fou are truly bizarre and amusing because of their lack of narrative meaning. For instance, Ferdinand and Marianne spend an evening in an apartment completely oblivious to the fact that the corpse of the owner is lying in a bedroom. In addition, Godard does not give a single clue as to what may have happened, which in other films would have been a big part of the storyline.

But then again, the rather unique aesthetic ideology conveyed by Pierrot Le Fou is openly stated at the beginning of the film. Here, Godard presents a scene where Ferdinand is reading to his son an art book about the paintings of Diego Velazquez (1599-1660), the legendary artist celebrated for his portraits of the Spanish Royal Family and other European celebrities of the time. According to the book, towards the end of Velazquez’s career, the artist became more interested in the painting and representation of abstract objects, with no precise form, such as air, wind, and shadows.

Arguably, inspired by Velazquez, Godard attempted with Pierrot Le Fou to create a film that deals with equally abstract and intangible themes and objects. Such a claim is supported with a clever cameo by celebrated American filmmaker Samuel Fuller, director of much beloved classic films such as Shock Corridor (1963) and The Big Red One (1980). In Pierrot Le Fou, he plays an American director visiting Paris, who is befriended by Ferdinand. Fuller’s character questions the reality showcased in film, and explains to Ferdinand that cinema should be about the portrayal of emotions.

Therefore, with Pierrot Le Fou, Godard refused narrative coherence and logical structure in favor of arresting style, impressionistic images, clever editing, and meditative voiceovers. This being said, it is perhaps ironic that Quentin Tarantino, the master of the smart cinematic narrative, appears to have been deeply influenced by Godard’s film. Just consider, Pierrot Le Fou as a road flick depicting a couple of romanticized criminals, self-aware of the icons and conventions of modern culture, and ultimately displaying the self-destructive nature of romanticism. But then again, this exactly describes True Romance (Tony Scott, 1993), which was written by Tarantino.

Because of its unique visual and narrative structure that challenges Hollywood conventions, Pierrot Le Fou is a film that may be difficult to appreciate and understand on a first viewing. History has shown that this is the case: when Pierrot Le Fou premiered at the Venice Film Festival in 1965, it received a terrible critical and audience reception. And within a couple of years it was highly praised as a masterwork of modern cinema. But then again, this same situation has happened with most of Godard’s films. Therefore, Pierrot Le Fou illustrates the genius and brilliance of Godard, who always was a step or two ahead of most critics, academics, and viewers.