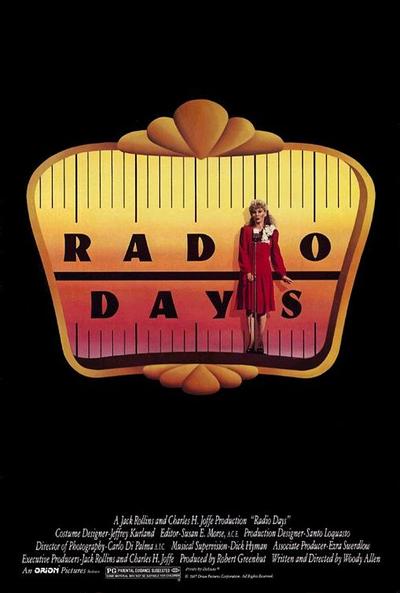 Woody Allen’s gentle and nostalgic tribute to the glory days of radio and coming-of-age during World War II plays like Fellini’s Amarcord filtered through Neil Simon. The nominal star is Seth Green as Joe, a teenage Jewish boy, growing up with a house full of relatives in Brooklyn. Allen cuts between Joe’s working class Brooklyn neighborhood and the glittery and glamorous world of radio in Manhattan. Joe’s favorite radio hero is The Masked Avenger, and he dreams of getting The Masked Avenger Secret Decoder Ring. Using all the money they have collected for Israel, Joe and his friends buy the ring, much to the shock of his mother (Julie Kavner) and the local rabbi. His father (Michael Tucker), a business failure embarrassed to be seen driving a taxi, is an ineffective and distant man. His uncle Abe (Josh Mostel) is obsessed with eating. His Aunt Bea (Dianne Wiest) is obsessed with getting married. All together, these relatives make up a rather chaotic life in Brooklyn for Joe. Interspersed with these family relations are vignettes of radio lore –from the cigarette girl (Mia Farrow) who wants to strike it big in radio, to the “Name That Tune” jackpot telephone call answered by a burglar, who guesses the right answer and wins the victimized homeowners a cornucopia of valuable prizes.
Paul Brenner @ allmovie.com