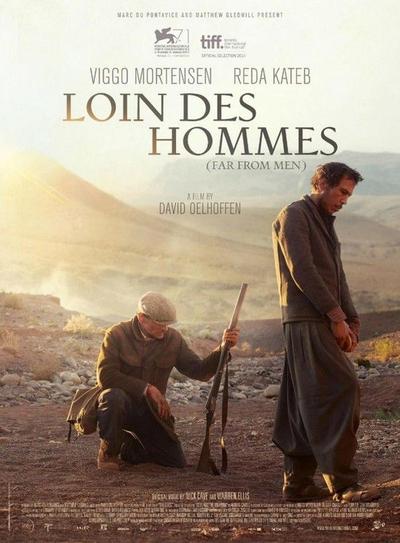 Quote:
The existential questions Albert Camus raises in his short story “The Guest” translate exceptionally well to the Western genre in “Far From Men,” which stars Viggo Mortensen as a colonial schoolteacher tasked with transporting an Arab farmer accused of killing his cousin to trial. While the film isn’t as tense as “3:10 to Yuma,” nor energetic enough to overcome its niche status, writer-director David Oelhoffen’s idea of approaching this potent two-hander as an Algeria-set horse opera proves as inspired as it is unexpected. By treating the story’s epic High Plateau vistas the way John Ford did Monument Valley, Oelhoffen amplifies the moral concerns facing characters living just beyond the reach of civilization and law.

Whereas some actors have yet to master their native tongue, in this touchingly humane performance, Mortensen convincingly adds French to the already impressive list of languages he can speak onscreen — a list that includes English, Elvish (“The Lord of the Rings”), Danish (“Jauja”), Spanish (“Alatriste”) and Lakota (“Hidalgo”), for those keeping track. Coming from anyone else, such verbal versatility might amount to showing off. But despite his movie-star reputation and looks, Mortensen remains a remarkably humble screen presence, a trait that’s perfect for a part that demands considerable empathy from whoever’s playing it.

What slight trace of an accent Mortensen brings actually suits the role of Daru, who is described as the Algerian-born son of Spanish parents — nicknamed “caracoles,” or snails, because these settlers carried their possessions on their backs, viewed as outsiders to both the native Arabs and conquering French. But the character initially comes across more mysterious, defined by his decisions long before we learn his background.

Oelhoffen first shows Daru at the blackboard of his rural classroom — the lone building as far as the eye can see — where he teaches French geography to Algerian kids who will almost certainly never visit the land of their colonizers, but whose parents have already begun to demand their independence. Things have become dangerous for Daru here on the frontier, and though the film takes place in 1954, the year the country’s National Liberation Front began its bloody uprising, the world looks primitive enough that it could be set nearly a century earlier on the Wild West frontier.

Just as Daru is debating whether to stay, understanding full well that he does so at his own peril, a lawman arrives dragging a bound man (Reda Kateb) behind his horse. This is Mohamed, who could just as easily be a captive Native American: He is accused of murder and must be delivered to Tinguit, where a court will decide his fate — not that there can be any mystery how the case would go, since he has already confessed to the crime.

For Camus, tough choices reveal one’s true character, and here, Daru refuses to be responsible for dragging a man to his death. What he doesn’t realize is that Mohamed has a strategic reason for wanting to stand trial, since has unwittingly started a feud that requires the dead cousin’s surviving relatives to avenge his murder, which would in turn provoke Mohamed’s siblings to retaliate and so on in a vicious cycle. “Getting killed by the French is the solution,” he says.

And so Daru agrees to accompany Mohamed, insisting on treating him like an equal (or “guest,” per the story’s original title). Oelhoffen has no reason to rush their trek, inventing a few key run-ins with parties on both sides of the emerging civil war not only for dramatic interest, but to further explore the code of honor at play here: Daru, who fought as a reserve officer during the war, has tried to put violence behind him, and now he is called upon to kill if necessary in order to protect an admitted murderer. The pic doesn’t limit its penetrating character questions to the white man either, giving Mohamed a chance to prove that he’s not without courage or honor — a gradual, subtly acted redemption that takes Kateb from cowering animal-like at Daru’s mercy to standing tall and equal beside him by the pic’s end.

The short story concludes with Daru giving Mohamed a choice whether to turn himself in or to escape to the desert and live among the nomads, and despite this act of kindness (which Mohamed declines, continuing on to Tinguit), his relatives threaten to take their revenge on Daru. Oelhoffen opts to take things in a different direction, which could also be said of his overall approach to the region. Rather than implying danger at every turn, cinematographer Guillaume Deffontaines’ stunning anamorphic lensing (so much more expansive than the boxed-in square framing of “Jauja,” which also follows Mortensen through desolate landscapes) shows a steady hand and innate respect for the country itself.

Equally original, the score forgoes the tacky exotification of other African pics, as composers Nick Cave and Warren Ellis emphasize the characters’ moral tension through a mix of woodwinds and other unconventional sounds, including blowing across champagne bottles. And yet, in both its tropes and themes (including a detour through a frontier brothel), the pic remains a Western, with all the strengths and weaknesses that entails. It may seem too slow, too dusty, too far removed from the contempo world of men to interest large swaths of the audience, but those same qualities are what make it so effective for fans of the genre.