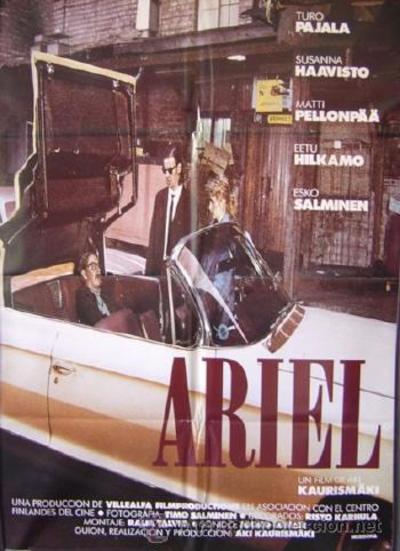 From Eye For Film:
Aki Kaurismäki’s first feature, Crime And Punishment (1983), updated and transplanted Dostoyevsky’s novel to present day Finland. Since then, the deadpan auteur has written, directed and edited some 20 films, which is about a fifth of Finland’s cinematic output since the Eighties. His films, however, have always proven more popular abroad than at home. Apart from Britain, few nations like to see their own follies, iniquities and all-round miserabilism being paraded in affectionately mocking entertainments, and Kaurismäki’s focus is very much on the dark absurdities of his motherland’s down-and-outs, drunks and dispossessed.

The themes of crime and punishment recur in Kaurismäki’s Ariel (1988), the second in a loose triad of films (along with Shadows In Paradise and The Match Factory Girl) that would become collectively known as the “underdog trilogy” or “workers’ trilogy”. In it, a man is unjustly sentenced and imprisoned, only to break free and commit several real crimes – but despite its grim subject matter, Kaurismäki is ultimately too much of a romantic to present a vision as unremittingly bleak as, say, Robert Bresson’s otherwise similar L’Argent (1983).
Copy picture

After the rural mine where he works shuts down, and his father shoots himself in despair, Taisto Kasurinen (Turo Pajala) takes off for the city in his father’s white convertible, with his life’s savings in his wallet. Already beaten and robbed before he has even arrived, Taisto is homeless, jobless and cashless when he runs into Irmeli (Susanna Haavisto), a single mother with a range of low-end careers to pay off her debts. Within a day of their meeting, they are talking about being together forever – but fate will instead send Taisto to jail on a false charge.

There he shares a cell with Mikkonen (Kaurismäki regular Matti Pellonpää), an older repeat offender, and with Irmeli’s help the pair plot a daring escape – but there will be further obstacles to face outside before Taisto can make a new life with Irmeli and her young son.

When asked how he is doing in jail, Taisto responds, “Alright – I’ve got a job.” It is more than he can say for the world beyond, where he always struggles to find regular employment, and where he seems to be constantly surrounded by thieves, con artists and stone-cold killers. A central part of Kaurismäki’s worldview is the notion that, for the down-trodden underclass, everywhere is a prison. The only comforts here are the dignity of labour, the refuge of love, and the warmth of nostalgia – this last embodied by a protagonist who sports a quiff, leather jacket and shades, who drives a classic car, and who listens to blues and rockabilly on his portable transistor radio. For, like so many Kaurismäki heroes, Taisto is essentially a character of the Fifties who has been set adrift in a later, colder age.

Ariel is a compelling blend of gritty realism and escapist fantasy – a polarity perhaps best emblematised by, on the one hand, the film noir which Taisto watches on television, and on the other, the Finnish cover version of The Wizard of Oz’s Somewhere Over the Rainbow with which Ariel closes. The influence of both these elements is never entirely absent – Taisto will re-enact the violent heist he has seen Bogart performing, but he is also an innocent dreaming that he can leave the Great Depression behind by escaping to a faraway land.

Beautifully shot by Kaurismäki’s regular DP Timo Salmonen, Ariel uses a laidback, minimalist aesthetic (long lingering shots of silent, stony-faced characters) to conceal a remarkably busy plot involving a roadtrip, an assault, a whirlwind romance, an arrest, a trial, a jailbreak, a heist, a double-cross, and a rendezvous, all compressed in less than 70 minutes. It is also, for all its gloom, very funny – and as for the title, you will just have to wait till the end to grasp its optimistic significance. 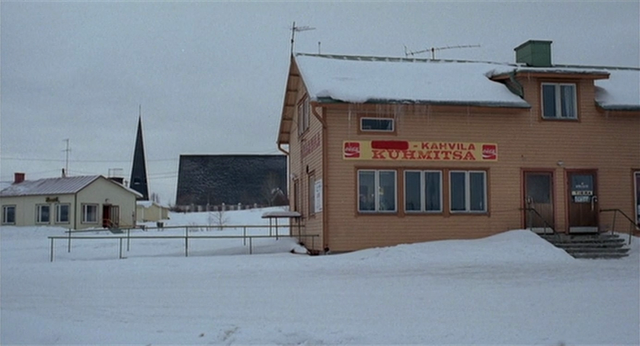 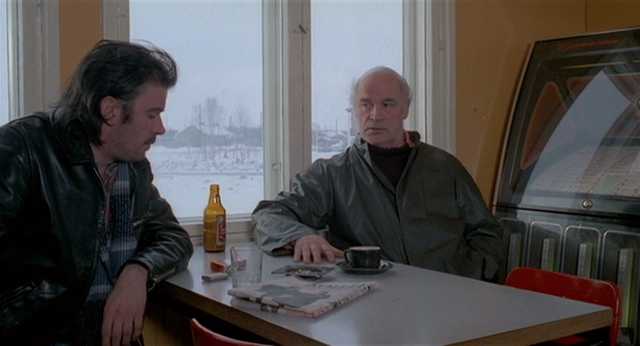 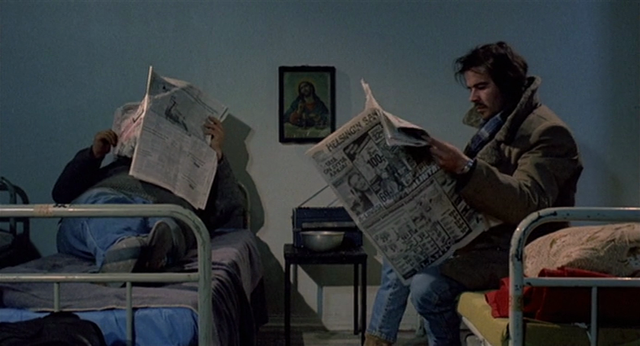 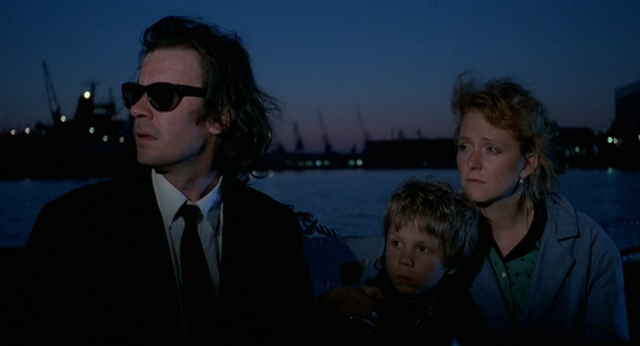