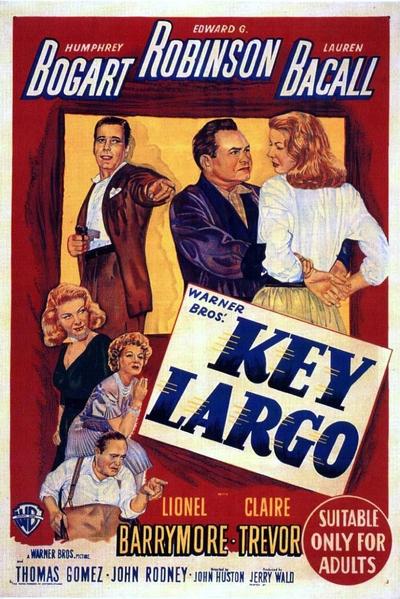 Key Largo is a 1948 film noir directed by John Huston and starring Humphrey Bogart, Edward G. Robinson and Lauren Bacall and featuring Lionel Barrymore and Claire Trevor. The movie was adapted by Richard Brooks and Huston from Maxwell Anderson’s 1939 play of the same name, which played on Broadway for 105 performances in 1939 and 1940.

Storyline:
Frank McCloud travels to a run-down hotel on Key Largo to honor the memory of a friend who died bravely in his unit during WW II. His friend’s widow, Nora Temple, and wheelchair bound father, James Temple manage the hotel and receive him warmly, but the three of them soon find themselves virtual prisoners when the hotel is taken over by a mob of gangsters led by Johnny Rocco who hole up there to await the passing of a hurricane. Mr. Temple strongly reviles Rocco but due to his infirmities can only confront him verbally. Having become disillusioned by the violence of war, Frank is reluctant to act, but Rocco’s demeaning treatment of his alcoholic moll, Gaye Dawn, and his complicity in the deaths of some innocent Seminole Indians and a deputy sheriff start to motivate McCloud to overcome his Hamlet-like inaction.

Key Largo was the fourth and final film pairing of married actors Bogart and Bacall, after To Have and Have Not (1944), The Big Sleep (1946), and Dark Passage (1947). Trevor won the 1948 Academy Award for Best Actress in a Supporting Role for her performance. 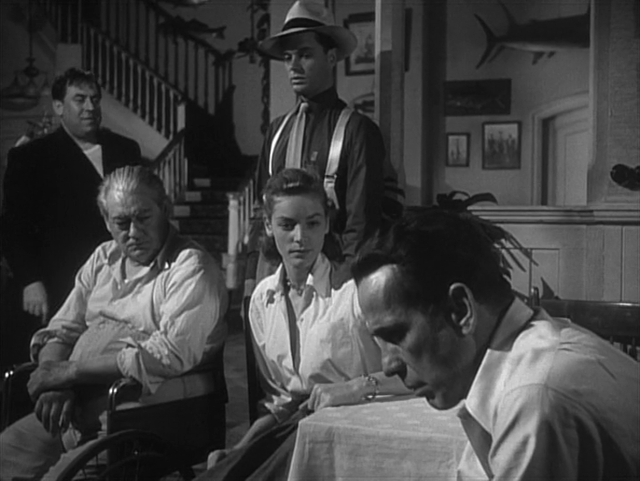 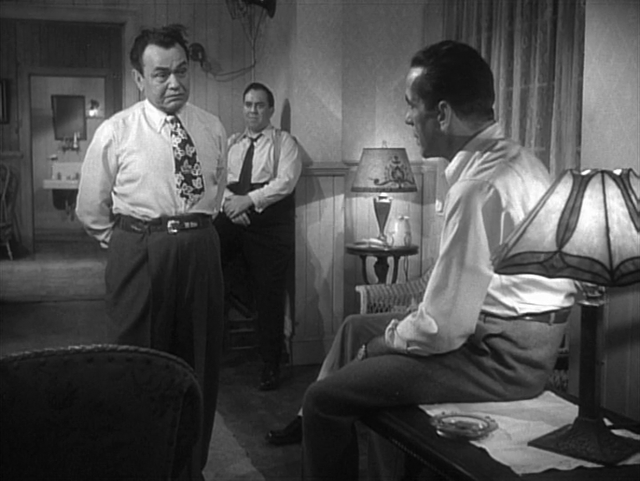 Production:
The script was adapted from a 1939 play by Maxwell Anderson. In the play, the gangsters are Mexican bandidos, the war in question is the Spanish Civil War, and Frank is a disgraced deserter who dies at the end.

Robinson had top billing over Bogart in their four previous films together: Bullets or Ballots (1936), Kid Galahad (1937), The Amazing Dr. Clitterhouse (1938) and Brother Orchid (1940). For this movie, however, Robinson’s name appears to the right of Bogart’s, but placed a little higher on the posters, and also in the film’s opening credits, to indicate Robinson’s near-equal status. Robinson’s image was also markedly larger and centered on the original poster, with Bogart relegated to the background. In the film’s trailer, Bogart is repeatedly mentioned first but Robinson’s name is listed above Bogart’s in a cast list at the end.

Exterior shots of the hurricane were taken from stock footage used in Night Unto Night, a Ronald Reagan melodrama which Warner Bros. also produced in 1948.

The boat used by Rocco’s gang to depart Key Largo, with Bogart’s character at the helm, is named the Santana, which was also the name of Bogart’s personal 55-foot (17 m) sailing yacht. 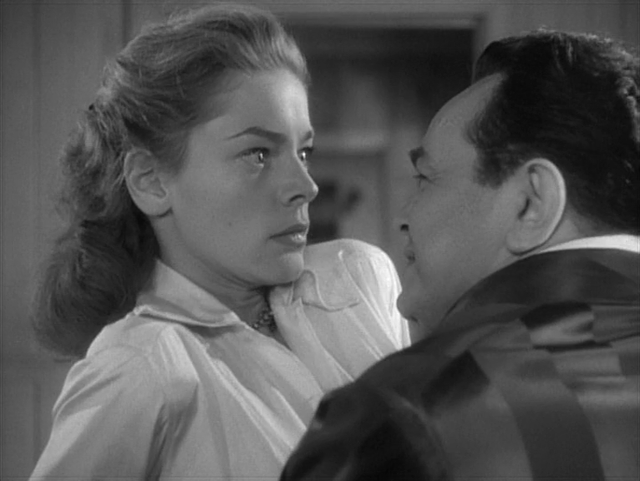 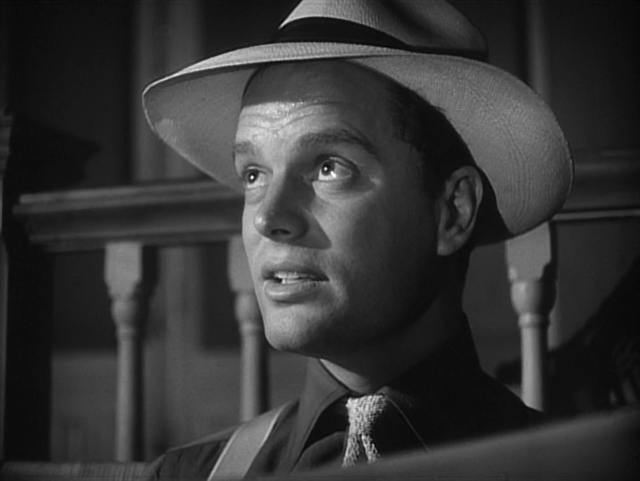 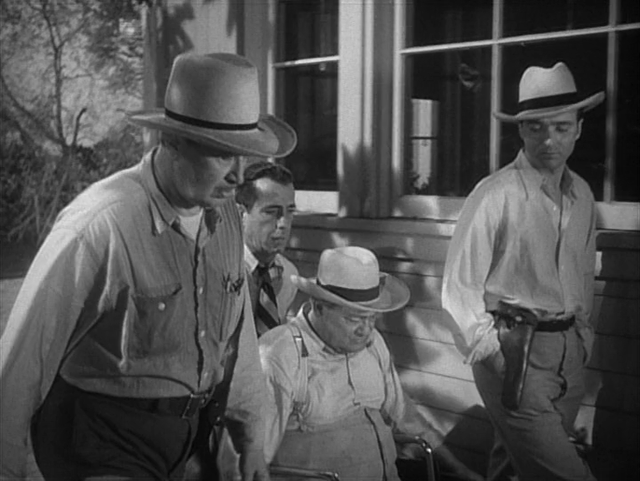 Song
A high point of the film comes when Robinson’s alcoholic former moll, ex-nightclub singer “Gaye Dawn”, played by Claire Trevor, is forced by Rocco to sing a song a capella before he will allow her to have a drink. Trevor was nervous about the scene, and assumed that she would be lip-syncing to someone else’s voice. She kept after director Huston, wanting to rehearse the song, but he put her off, saying “There’s plenty of time,” until one afternoon he told her that they would shoot the film right then, without any rehearsal. She was given her starting note from a piano, and, in front of the rest of the cast and the crew, sang the song. It was this raw take that was used in the film. The song was Moanin’ Low, composed by Ralph Rainger with lyrics by Howard Dietz, introduced on Broadway in the 1929 revue The Little Show by Libby Holman becoming a hit and Holman’s signature song.

Author Philip Furia said about the song, ‘Moanin’ Low’: “[it’s] about a woman who’s trapped in a relationship with a very cruel man. And … you see [Trevor as Gaye] realize that that’s exactly her real life situation. [Trevor’s performance] slowly break[s] down, and her voice falters and she sings off key.” Robinson is dismissive but “Bogart pours her a stiff drink, walks it over … under gunpoint … and gives it to her and says ‘You deserve this’—it’s just a great dramatic scene, [and] it’s a wonderful use of a song in a non-musical picture. [Trevor] won [the Academy Award] based purely, I think, on that performance.”
~Wiki 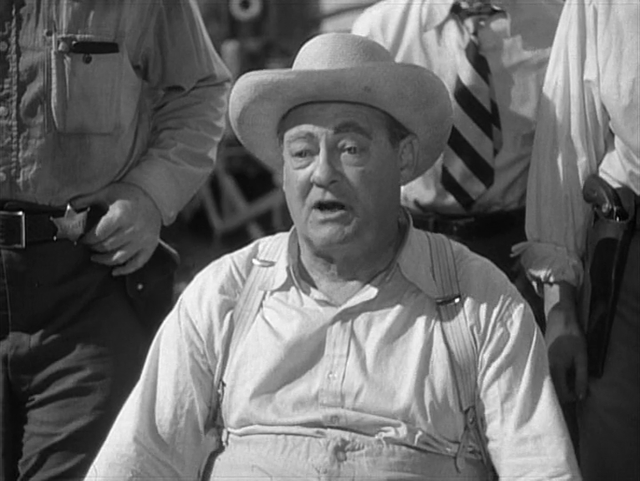 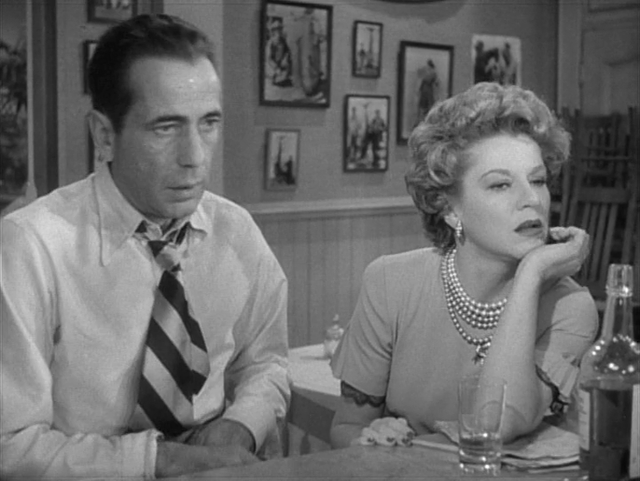