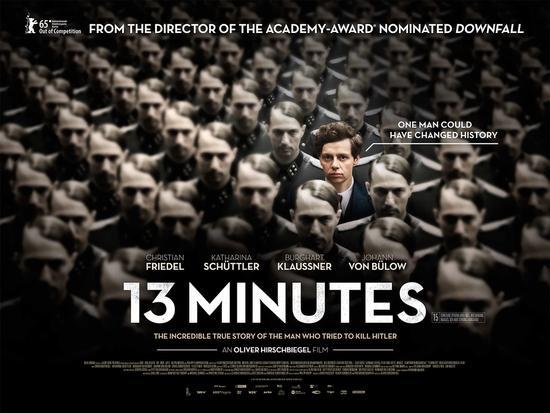 In November 1939, Georg Elser’s attempt to assassinate Adolf Hitler fails, and he is arrested. During his confinement, he recalls the events leading up to his plot and his reasons for deciding to take such drastic action.

Quote:
It’s been a tough old time for Oliver Hirschbiegel in recent years. His last film, the dreadful Diana (2013) saw everyone wade into the slaughter. It was a far cry from the international acclaim that greeted Downfall, his 2004 account of the last days in the Fuhrer bunker. In an effort to get back on track, he returns to Hitler with 13 Minutes, a moving account of Georg Elser’s attempt to assassinate the Nazi leader in 1939.

Despite taking a stand when so few did, Elser remained relatively unknown for years after the war. This Swabian craftsman was denigrated as an odd misfit railing against the world for perceived slights. 13 Minutes, the amount of time he missed his target by, looks to correct this. It’s an account of the man rather than the attempt.

To make that clear, the film opens with the explosion. An escaping Elser (Christian Friedel) is captured, his interrogation serving as a framing device to explore the path from good time musician to lonely activist. Elser in the early 1930’s lives by a Swiss lake playing his instrument and romancing a series of women. It’s a good life unspoiled by the spectre soon to loom over the country. Then an urgent call sends him back to Swabia to take over the family finances.

The Nazis creep in innocuously enough at first. There’s a bit of drunken shouting but a scuffle in the bar is the worst of it. As time passes, the swastika comes to dominate his town, and soon Jews are marched off, churchgoers harassed and any political opposition rounded up and sent into forced labour battalions. Fred and Léonie-Claire Breinersdorfer’s screenplay focusses on the mounting atrocities that cause a self-proclaimed pacifist to take up arms. Baffled by the support Hitler receives from those drunk on technological progress and restored pride, he sees the storm clouds that will rip apart his country in a few short years.

Friedel is impressively assured as Elser. He has an impish charm that carries him through his rakish days, and quiet grit in the face of brutal interrogation techniques. Whippings and the removal of fingernails, shot without adornment, can’t break him. Only the threat of harm to his lover Elsa (Katharina Schüttler) shatters resistance. Theirs is a convincing relationship when so often romance is tagged on. Moments alone burn with shiny big screen passion, the chemistry between Friedel and Schüttler compelling.

With his central character secured, Hirschbiegel takes few chances along the way. He’s content to cast a darkening fog over Germany and lead the story smoothly through to its conclusion. Barring a failed attempt to conjure up a drugged out state near the end, he employs no tricks. This is handsome, noble drama from start to finish. More importantly though, it works. History is full of what ifs. Who knows what 13 minutes more would have brought. The only thing we can say for certain is that even in the worst situations, people like Elser still exist.