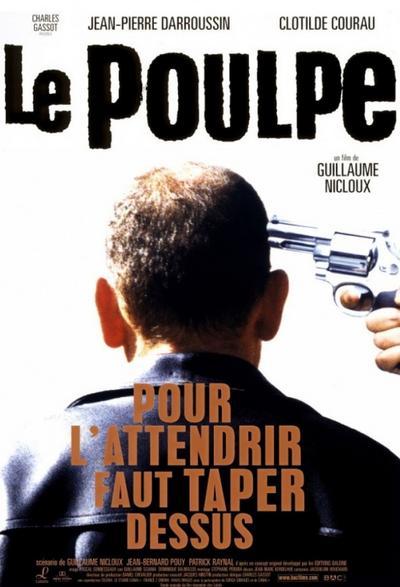 “Le Poulpe” is adapted from one of a series of French crime novels, each written by a different author. They are quick reads and often of dubious quality. This film adaptation by Guillaume Nicloux is, however, a different matter.
Gabriel, dit Le Poulpe (The Octopus), played superbly by Jean-Pierre Darroussin, is a laid-back private investigator who works on cases for his own pleasure. He is drawn to the fictional Loire Valley port of Angerneau (St. Nazaire, Loire-Atlantique), with his lover Clotilde (the luscious Courau) who has been summoned by the police concerning the defacement of a deceased relative’s grave. Since Angernau is her home town, she wants to leave it as soon as possible to avoid old acquaintances, but Gabriel stumbles on intriguing events concerning the cargo of a ship in port. Central to the scheme of things is a drunken Scotsman (Faulkner) who seems stranded in the town.Three of the town’s young people are found dead in the course of events and Gabriel calls in his offsider, Pablo (Demonico), a rumpled heap of an oaf in the vein of Christian Clavier’s Jacquart in “Les Visiteurs”. Together they investigate the shady dealings which connect Clotilde’s old lover, the town Mayor (Driessche), with the ship.
Essentially a film policier with a decidedly TV Movie feel, “Le Poulpe” is very much more. Director Nicloux has infused this low-key thriller with innovations requiring the alert viewer to rewind often (if watching on video):
• Puzzled characters pop in at frame left for no apparent reason, but somehow add to the sequence.
• The taxi driver wears a hearing aid that is always on the blink.
• Flies are always buzzing around the head of one of the baddies.
• Cut-frame editing produces a hallucinatory effect as Gabriel snoops in the room of a suspect.
• In a jibe at Jean-Marie Le Penn’s Front National, a female right-wing politician is sent up hilariously.
• Gabriel scans a newspaper in the back of a taxi, then throws it on the rear window ledge. The camera follows, checks out what he was reading, and then the front page rips off, flies out the window and settles on the street.
• The conversations between Gabriel and Clotilde are complex and rewarding; they cover every possible subject in depth, and thankfully lead nowhere. And the sex scenes between them are actually sexy.
• One of the most engaging scenes shows the bisexual Clotilde pulling off her top in a clothes shop to try on a tee shirt. She tells the mildly shocked salesgirl that she’ll buy the tee shirt if the salesgirl will take off her top too.
Inspired editing and a great screenplay make “Le Poulpe” a delight. A great addition to the genre.
Harold Hark link

Quote:
Name: Gabriel Lecouvreur, alias “Le Poulpe” (The Octopus)
Distinguishing features: Shoes. Soft white leather or coarse red canvas, what matters most is feeling good in them. (Previous owners are normally out of the running.)
Occupation: Neither cop nor detective. Occasionally, publicist.
Wages: Paid in flesh.
Love life: Cheryl, as long as he gets home in time. (The hot-blooded hairdresser digs a little stockroom salsa when The Octopus is on the road.)
Known hangouts: Places of religious and fashion worship, waterfronts and urban dives. Favorite quotation: If you fuck in the henhouse, you’re gonna break eggs.