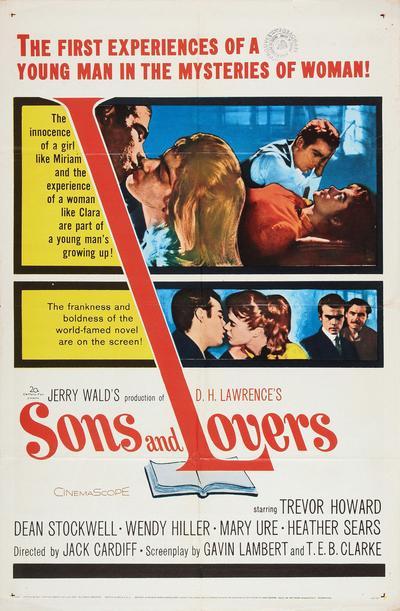 The film opens halfway through the story: Paul Morel is in his early twenties. Within the first ten minutes one grasps all of the important relationships of the drama: the abandonment of Walter Morel by his wife and sons, who detest him because of his weakness and cruelty; Paul’s desperate attachment to his mother, and his frustrated love for Miriam. The film then concentrates on the final failure of Miriam to break through Mrs. Morel’s hold on her son, Paul’s unsuccessful affair with Clara Dawes and his final liberation through his mother’s death.

Cardiff’s economy in leaving out the first twenty years of the Morel family saga (as well as many of the lesser characters) is well justified, for the structure of the novel emerges all the more clearly. With considerable skill, he balances Mrs. Morel’s almost morbid domination of Paul’s sensitive and passionate nature with the physical inhibitions produced in Miriam by her mother’s puritanical beliefs. The novel is rather humorless; Cardiff creates several badly needed moments of comic relief–such as an address from a stout suffragette. Most important, he never loses sight of Mrs. Morel; her influence pervades the film at every turn.

The actors match the director’s performance. Trevor Howard’s big physique, broad face and rumbling voice adapt themselves beautifully in portraying Walter Morel’s vacillation between drunken violence and puppylike abjection before his wife and sons. Unable to understand his wife or to break her hold over Paul, he can only stage a series of futile revolts. Wendy Miller is equally successful as Mrs. Morel; her changes of expression at the slightest mention of a competitor for Paul’s devotion are masterful. As Paul, Dean Slackwell is less convincing, but intense and labile enough. The camera catches the spirit of the novel in a series of leitmotifs: flowers, machinery, turning mill-wheels. Occasionally it alone sustains the sensual tone of Lawrence’s introspective work.