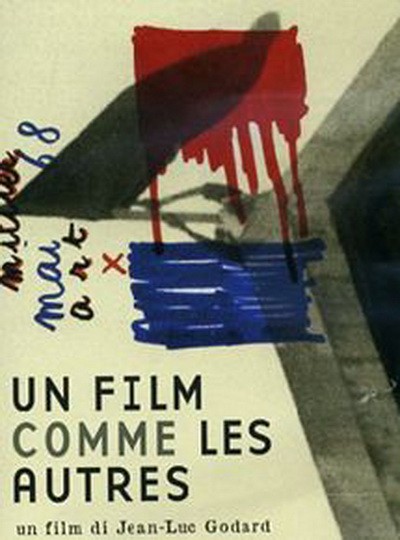 Quote:
In the aftermath of the student demonstrations and worker strikes that swept across France in May 1968 and after, Jean-Luc Godard — who had already declared the end of cinema, at least for him, in Week-end — fully embraced the student radicalism and the peculiar French Maoism of the time. He was setting off on a journey away from the cinema, but continued making films (and eventually videos) nonetheless. For the last couple of years of the 60s and throughout the 70s, Godard all but abandoned the commercial cinema for various political and aesthetic experiments in which he would drastically reconfigure his approach to the cinema. A Film Like Any Other was one of the first statements of this new, experimental era in Godard’s career, the beginning of his long exodus from the cinema, the first of what would be many attempts to work out, in film form, the political and cinematic questions that concerned him. In that respect, this film is a precursor to the films that Godard would make collaboratively with his Dziga Vertov Group experiments, as well as the later (and ultimately much more advanced) videos he’d create with Anne-Marie Miéville.

A Film Like Any Other establishes many of the concerns that would motivate the later films: the possibility of real change, the problems of how to better organize revolutionary actions, and implicitly the central idea that would drive the Dziga Vertov Group’s work: Godard’s attempts to reconstruct a cinematic form appropriate to ideological films. Whether intentionally or not, A Film Like Any Other also winds up demonstrating, better than any of the other films Godard made during his revolutionary period, just why the student idealism and radicalism of this period ultimately amounted to so little. The film is a direct response to (and document of) the events of May 1968. It is constructed primarily around footage of a group of workers and students having a discussion in a field with tall grass and flowers, interspersed with black-and-white documentary images shot during the May protests. The color footage of the discussion is shot from a low angle, with the speakers mostly either turned away from the camera or with their heads chopped off by the top of the frame, so that they remain anonymous representatives of student or proletariat interests rather than individuals.

On the soundtrack, Godard frequently layers the audio of this discussion with other voices, a man and a woman who are not part of the group and who sometimes talk over the discussion. Their interjections are excerpted from various texts or describe events happening in other countries, largely consisting of accounts of fascist repression or the co-option of socialist regimes by dictatorial impulses, as with Stalin. The soundtrack is often a riot of voices in which some are drowned out and others rise periodically above the chaos, but more than anything the film captures the spirit of the “revolution” as endless talk, endless debate about intricacies of policy and rhetoric, endless cycling through possibilities and if-then scenarios. Whether Godard means to or not, there’s a pointed irony in his editing when he cuts from the frenzied action of the May riots to the students sitting in that pictorially beautiful field, calmly discussing revolution and resistance and never quite doing anything about it.

And yet all this discussion doesn’t even imply the openness of a free exchange of ideas. One of the most telling moments (unintentionally funny, too) comes when the group is discussing the possibility of disrupting the “bourgeois knowledge” of the university, and one of the group’s members asks if they mean discussing things with the professor, debating the professor’s ideas. The rest of the group reacts with horror, shouting “no!” in unison, as though the idea was absurd. (The one who suggested the idea lamely protests, “it was just a question.”) No, what they mean is impeding things through protests, riots, disruptions and provocations, like the one suggested earlier on the soundtrack of standing up in class and, more or less, calling the teacher an asshole and storming out. The very idea of dialogue with the bourgeois, with the oppressors, is anathema to them, not even worthy of consideration. For all their endless talk, their perpetual debate and discussion, they’re only willing to give voice to certain ideas, to discuss things with those who already agree. It’s a closed circle, a feedback loop in which they repeat slogans and bits of rhetoric, circling around and around the same ideas and the same concepts. They all agree so completely it’s hard to see the point of talking so much other than as a form of reinforcement and encouragement.

For all that talk, one of the most powerful sequences here is a brief montage in the latter half of the film in which the voices on the soundtrack finally fall silent, as though in hushed respect for the images of the fiery, smoke-filled streets of Paris, where students and police are massed against each other across barricades, in streets filled with tear gas fumes and cars on fire. These images of the May riots, shot in the streets at the height of the chaos, are the film’s most enduring legacy, and Godard assembles a wealth of footage that captures the violent, unpredictable mood of the protests, showing the competing signs for various socialist and students’ groups as well as those held aloft by counter-protesters in favor of De Gaulle. The images from the protests are undoubtedly powerful, capturing all the activity in the streets, the sense of upheaval and instability, the sense that anything could happen. Simplistic slogans are angrily scrawled on the walls, there are huge assemblies where speakers give impassioned speeches (unheard on the soundtrack, doubtless because whatever video equipment recorded the May events by and large wasn’t equipped for sound), cops beat the protesters and the students throw stones or light cars on fire. It’s an atmosphere of chaos and violence, and it’s these images that provide context to the theoretical discussions of the rest of the film. May 1968 suggested that change was in the air; A Film Like Any Other suggested the determination of these radicals and intellectuals to talk about that change, to wonder what they could do next, to nitpick one another’s points while basically agreeing.

Some of Godard’s later works in this vein would pose similar questions in formal and aesthetic terms, but in A Film Like Any Other he hadn’t yet really begun the process of rebuilding atop the razed foundation of the cinema left over from Week-end. The other post-Week-end film he made around the same time, the much more successful and inventive Le gai savoir, was similarly built around ideological dialogue and dialectics, but despite its simplicity formal questions were very much at the heart of that film in a way they aren’t here. Rather, A Film Like Any Other represents Godard’s cinema truly stripped down to its barest essence. The result isn’t really satisfying, as politics or as cinema, despite some interesting moments and memorable documentary images from May 1968. – Ed Howard 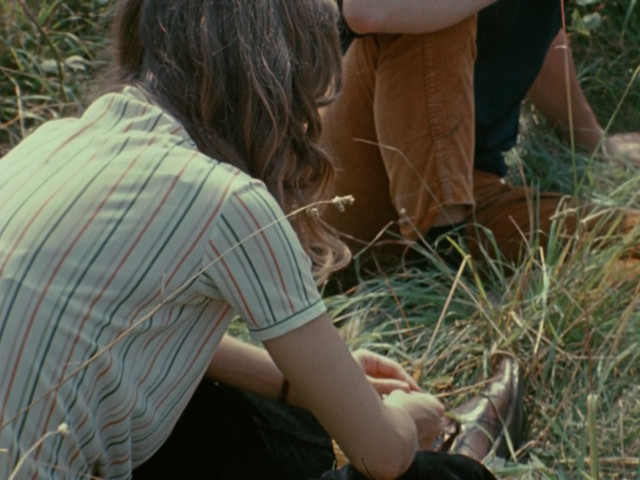 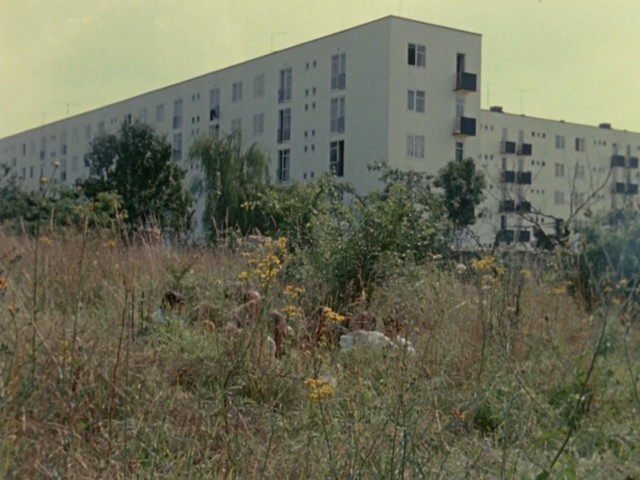 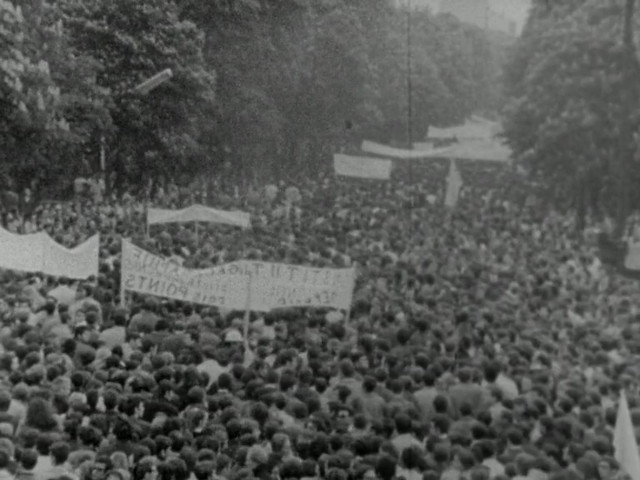 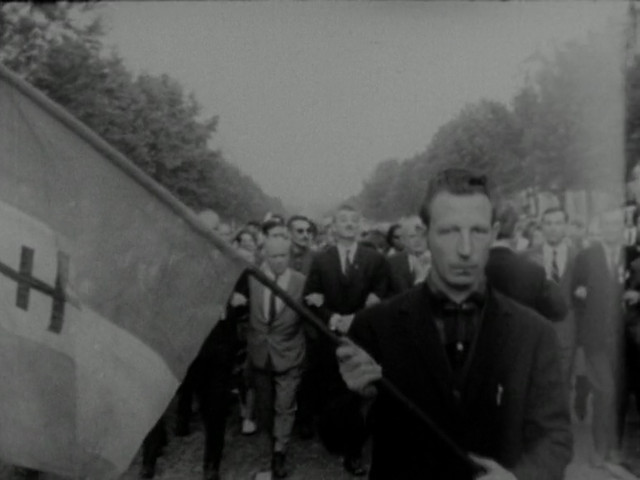 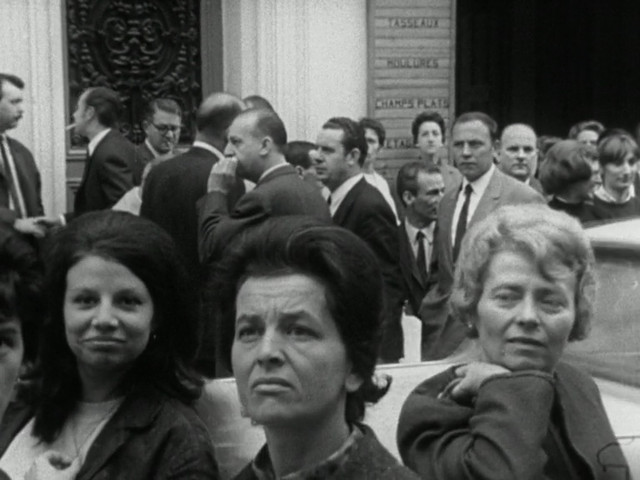 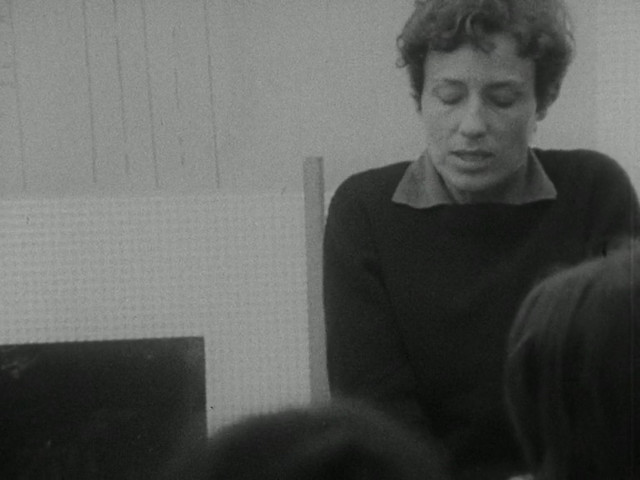