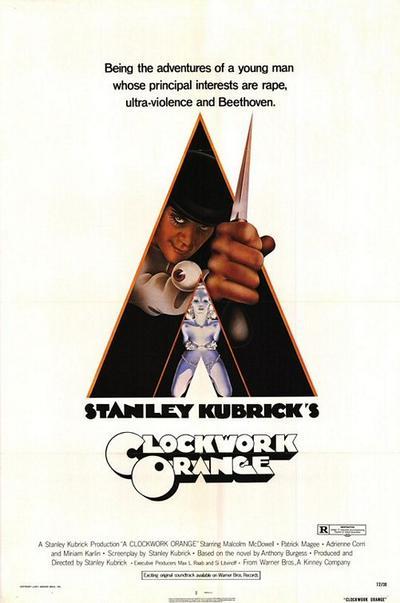 Quote:
Twenty-five years on from its release, A Clockwork Orange has lost none of its power to shock and outrage. In this near-future setting the outlets for teenage enthusiasm are few and far between. Disenchanted, youths form ritualistic gangs, fight battles and engage in vandalism. Alex DeLarge (Malcolm McDowell) is the leader of just such a group, marked out by their preferences for phallic masks and boiler suits. His select followers (known as droogs) are Dim (Warren Clark), Georgie (James Marcus) and Pete (Michael Tarn). On a typical evening they’ll stop by the Korova for some milk-plus, to sharpen them up, before venturing into the urban jungle. On this particular night they don’t have to travel far for a spot of “ultraviolence”; a rival gang are about to force a bit of the “old in-out” on a helpless young devotchka (girl). For the pure love of violence they decimate their rivals.

Such easy-pickings are unsatisfying though, as illustrated by their mechanical but vicious beating of an elderly tramp (Paul Farrell). Picking up a sleek looking Durango 95, Alex indulges in an extended game of road-hog along the country lanes and ends up by an isolated house. Unfortunately for writer Frank Alexander (Patrick Magee), this is to be the high-point of their night of terrorization. To the tune of “Singing in the Rain”, they brutally beat him and gang-rape his wife (Adrienne Corri), who later expires from her injuries. Finally satiated, it’s back to the Korova for a night-cap. A chance encounter happens to reveal Alex’s autocratic control of his comrades, though it seems that he is capable of assuaging any dissension.

The only drawback of this nocturnal pillaging is that it leaves Alex too exhausted to attend school. His parents are easily put off from asking too many awkward questions but Alex has less luck with his juvenile officer Mr. Deltoid (Aubrey Morris). He understands the malicious mind of Alex only too well, intuitively realising that he’s the sort of delinquent who considers himself untouchable. However, while this might hold true for the impotent forces of authority, the weak link in this logic are Alex’s droogs. They want more control, higher earnings and less picking on Dim, so Alex had better watch his step (else he’ll be sent down for a long time indeed).

This is an astounding piece of film-making which dazzles, disturbs and succeeds in achieving a very difficult result. By the end of A Clockwork Orange we are manipulated into cheering for Alex, despite his brutal and amoral nature. He is a victim at the mercy of an uncaring society, condemned to the physically unbearable “aversion therapy” and preyed upon by his former targets. By itself his treatment induces revulsion, but it’s as a reflection of the times (where the negation of personality is applauded) that this imagery strikes deepest. Anthony Burgess’ book cleverly indicts humanity and its herd instincts, but it’s only through Kubrick’s clarifying (and simplifying) adaptation that the true visceral horror bursts forth.

McDowell, as the mixed-up Alex, gives a gripping performance as both narrator and actor. The disparate sides of his character, the aesthete and the misanthrope, form an unwieldy balance. Every sign indicates that he should be crushed yet, inevitably, we care for him and snatch at the faintest glimmer of hope. When compared to such a strong central figure the remaining roles are destined to be somewhat in the shade, yet they are all convincingly drawn (though the victims are portrayed ambiguously). Mr. Alexander is eager to help (and use) young Alex, when he doesn’t know who he is, yet as soon as the realisation dawns, he’s happy to search for revenge at the same base level. Of course, the irony is that he wouldn’t be having these urges (wonderfully acted though they are) had chance not brought Alex and his droogs visiting in the first place.

The element which elevates A Clockwork Orange above similar films is its bizarre juxtaposition of music (often classical) with violence. Images and sound pull in different directions, stimulating conflicting emotions (as Kubrick no doubt intended). On top of this, the profusion of erotic symbols forms a not very subtle subtext, taking in everything from the objet d’art murder weapon to the feverish coupling of medical staff. Kubrick filters all of this through camera trickery (slow-motion, unusual angles, fish-eye lens etc), heightening rather than subduing emotion. It’s easy to see why A Clockwork Orange has divided critics – it’s extremely graphic and unsettling. However, this isn’t a movie which will change nations and for Kubrick to continue to ban the film in Britain is perverse, hypocritical and disappointing. 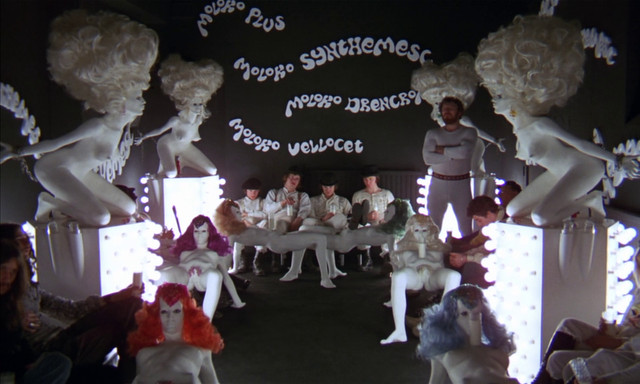 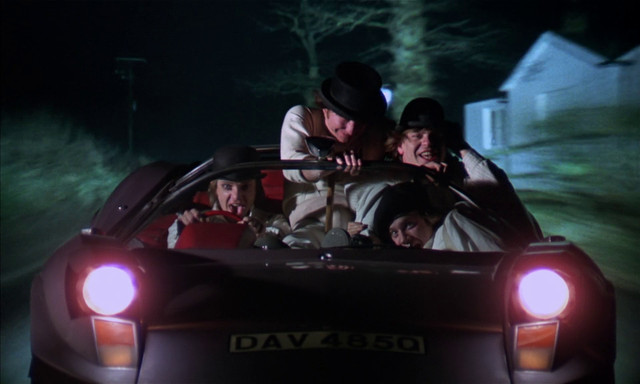 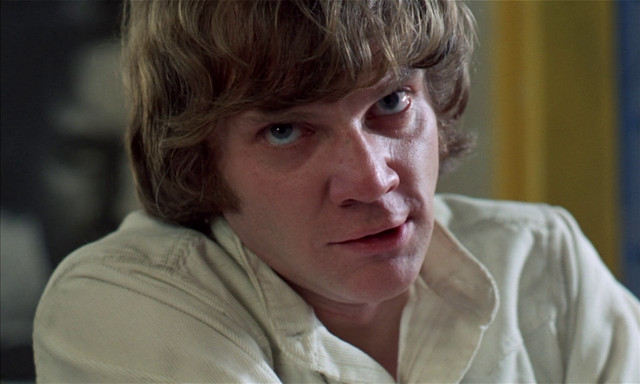 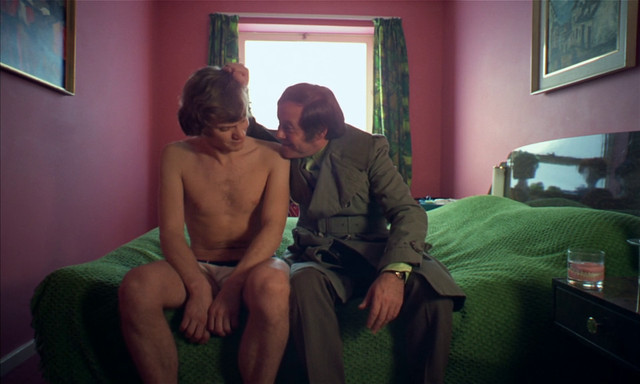 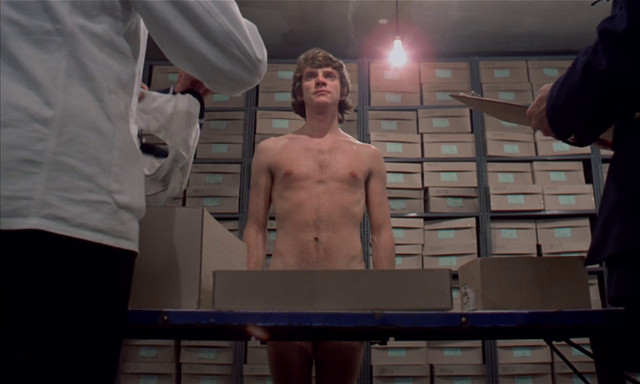 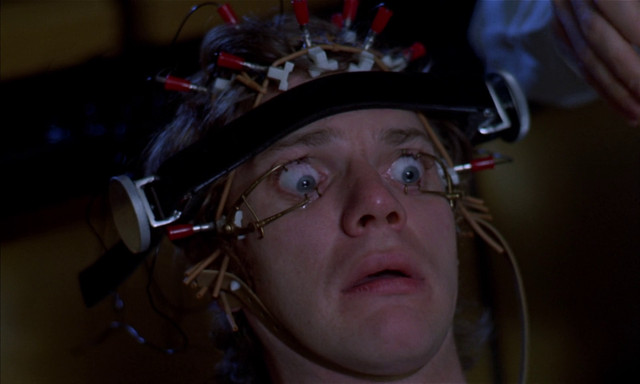 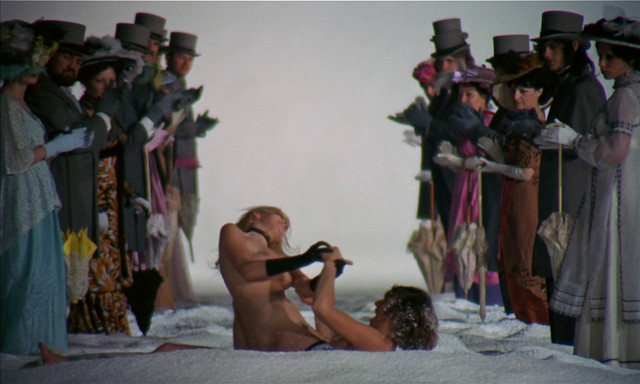