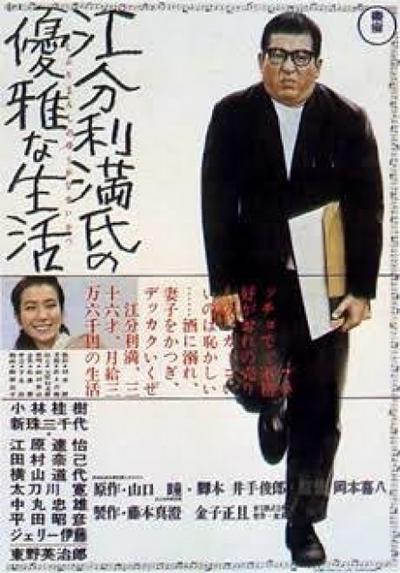 Quote:
Eburi is a 36 year-old man. Nothing enthuses him any more. While being drunk, he promises to contribute a story to a magazine. When he sobers down, he decides to write about the life of a salaried employee like himself who is very ordinary, not particularly talented.
The following is his story:
In 1949, Eburi gets married to Natsuko. His monthly salary is 8,000 yen and hers 4,000 yen. Therefore, both have to work to support themselves. Eburi has developed a habituIl tendency to pester around when he gets drunk. One year after their marriage, son Shosuke is born. In 1959, Eburi’s mother dies in despair of her husband who has become listless due to the several ups and downs of gaining big profits and going bankrupt. His father is still alive and Eburi is enable to find a way to pay his father’s debts. He is doubtful if he can make his wife and child happy. Nevertheless, he has somehow managed to survive so far, living in one of the houses at the employee housing quarters. He gives the title “The Elegant Life of Mr. Everyman” to his story of half novel and half essay style. When it is published, it receives the Naoki Literary Prize (the award given in memory of popular writer Naoki Sanjugo). At a party to celebrate his award, he gets drunk and pesters around.

Notes
The film is based on a novel written in the style of an essay under the same title by Yamaguchi Hitomi, depicting everyday life of a man categorized as “During-the-war Generation” who spent school days during the war and get married to start new life in the struggling post-war era. “Everyman” in the title means an average salaried employee who makes up an overwhelming majority of the city population in Japan, and “The Elegant Life” indicates sarcasm on betterment of the standard of living of ordinary salaried employees accompanied with Japan’s economic growth after only a decade from the destroyed post-war period. As depicted in the film, the author Yamaguchi Hitomi was awarded the Naoki Literature Prize for this story. When he established himself well enough to become independent, he quit working as a salaried employee. Director Okamoto Kihachi and the leading actor Kobayashi Keiju belong to the same generation as the author. Exploiting innovative effects such as inserting animation sequences, the film humorously presents compassion of a middle-aged salaried employee. Kobayashi Keiju, who was originally noted for his excellent portrayal of salaried employee, won the best leading actor award of the Mainichi Film Contest for his superb performance in this picture.