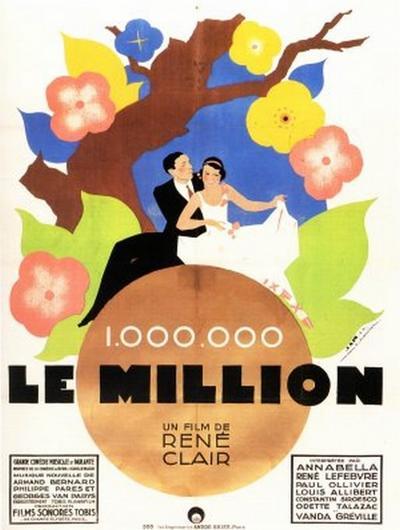 Synopsis
A penniless artist, Michel, is pursued by creditors when he discovers he has won the million florin lottery. He realises that he left the winning lottery ticket in his jacket, which he gave to his girlfriend, Béatrice, to repair. However, Béatrice, upset when she saw Michel with another woman, gave the jacket away. What ensues then is a madcap chase by Michel and his friends to recover the missing jacket – and the million florin prize.
Films de France.com

Review
The greatest directors have always created their own worlds, instead of rehashing familiar territory. They people a universe through their personal vision with characters undiscoverable elsewhere. Just think of Fellini, Bergman, Chaplin, Kurosawa, Antonioni, Hitchcock. And René Clair.
At the onset of the sound era, French cinema was in the doldrums, economically and artistically, until Clair’s ebullient early talkies proved a great success worldwide and put French sound film on the map. All of them take place in an enchanting Paris, marvelously designed by the great art director Lazare Meerson, and lit by Georges Périnal with exquisite soft-toned atmospheric cinematography.
In Clair’s magical city of small cobbled courtyards, of bistros, drunkards and street-singers, and skylines dotted with chimney pots at odd angles, there are no villains. An unsentimental love of humanity permeates every frame, operating with members of all levels of society—merchants, artists, young lovers, criminals and gendarmes.
The extraordinary opening sequence of Clair’s masterpiece, Le Million (1931), literally drops us into his universe. After a breathtaking traveling shot over a series of rooftops, we join two men, peering down through a skylight at a joyous party; they’ve come to investigate the cause of the clamor at their neighbors’ flat. Why is everyone so hysterically happy? The camera then barges in on the celebration and the clock turns back to the morning of that day when Michel (René Lefèvre), a poor artist sharing a studio with Prosper (Louis Allibert), and hounded by his creditors, finds out that he has won a fortune in the lottery. But Michel has left the ticket in a jacket given to his girlfriend Béatrice (Annabella) to mend and she has lent it to a notorious thief whom she hid from the police. The chase begins.
The Clair style, most brilliantly exemplified in Le Million, is a synthesis, a perfect fusion of sound, dialogue, camera placement and editing. The mood may be ironic, sad or happy, but music and song are never far away. At first Clair was skeptical of the value of sound—he called it “an unnatural creation, just useful for canned theater,” and detested the loquacious movies of the early talkie era, with their slavish devotion to dialogue. Soon, however, he altered his views: realizing the creatively non-realistic use to which the soundtrack could be put, he employed sound contrapuntally rather than synchronously, divorcing the literal relationship of sound and image, and never permitting the words and pictures to duplicate each other.
Although Le Million was the screen adaptation of a stage play, Clair did away with virtually all of the dialogue, replaced it with songs, and introduced a chorus of tradespeople to comment on the action. Both Michel and Prosper have scenes in which their thoughts or consciences sing to them – a procedure unheard of in films at the time. (In a lovely shot, the bemused Prosper looks around quizzically for the source of the singing.)
Le Million is a dazzling divertissement built around the search for the missing ticket. It seems as if everyone in Paris is brought into the dance/chase – and here Clair makes full use of the celebration of movement, the balletic view of activity, the brilliant sense of comic timing and avant-garde imagery that had made his earlier comedies of the 1920s (Entr’acte, Paris qui dort) so memorable.
A particularly resonant use of sound occurs near the end of the film. Michel and Béatrice, who are truly in love, have taken refuge in a bosky décor on the opera house stage and are exchanging sweet nothings we can’t hear, while a few feet away from them, an overweight elderly tenor and an elephantine prima donna are bellowing a singularly unconvincing and preposterous love duet. When the coat containing the ticket is finally located, Clair employs one of his more daring experiments in sound—as a fight over the ticket breaks out and the garment is pulled back and forth by a rowdy crowd, the scene is transformed by shouts and whistles on the soundtrack into a football match. Le Million became a manifesto film for an adventurous sound cinema in which synchronized dialogue would never play a dominant role. With it, and his next film, A nous la liberté, made later the same year, Clair taught the world how to use a sound track.
For many years, René Clair was ranked with Jean Renoir and Marcel Carné as one of France’s greatest directors—he was arguably the most archetypically French of the three. His early sound films, especially Le Million, influenced filmmakers everywhere. Rouben Mamoulian’s superb tongue-in-cheek musical fantasy Love Me Tonight (1932), one of the most imaginative Hollywood films of its period, derives a good deal of its Parisian atmosphere from Clair; the Marx Brothers’ A Night at the Opera (1935) is also in Million’s lineage, with its scenes of inspired lunacy during a performance of Il Trovatore. When Chaplin’s Modern Times was released in 1936, it was noted that there were striking resemblances between it and A nous la liberté. Tobis, Clair’s production company for that film and Le Million, made a claim against United Artists, which produced Chaplin’s film, and decided to take the matter to court, although Clair himself refused to associate himself with the action. (After Chaplin’s death, Clair wrote: “I am happy and proud if I, whom he had so much influenced, was able for once to influence him.”)
While a good deal of European cinema of the 1930s has not stood the test of time, Le Million hasn’t aged a bit—seeing it today, nearly 70 years after its release, one still cannot help feeling exhilarated by its sheer audacity and grace.
Elliott Stein, Criterion.com 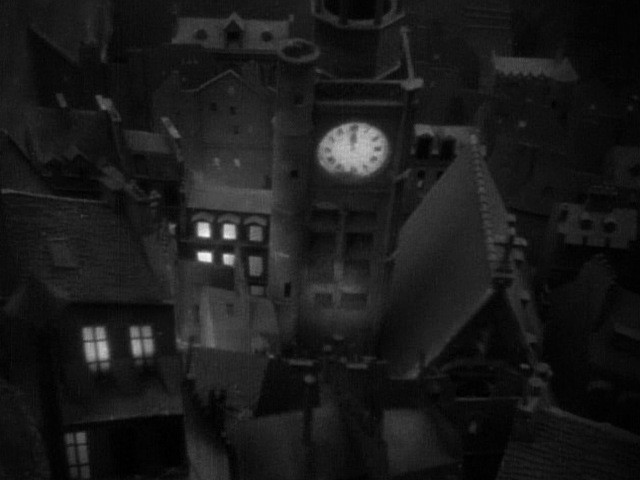 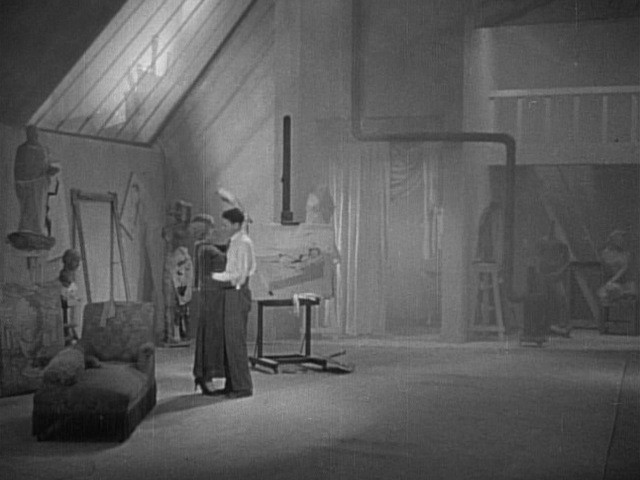 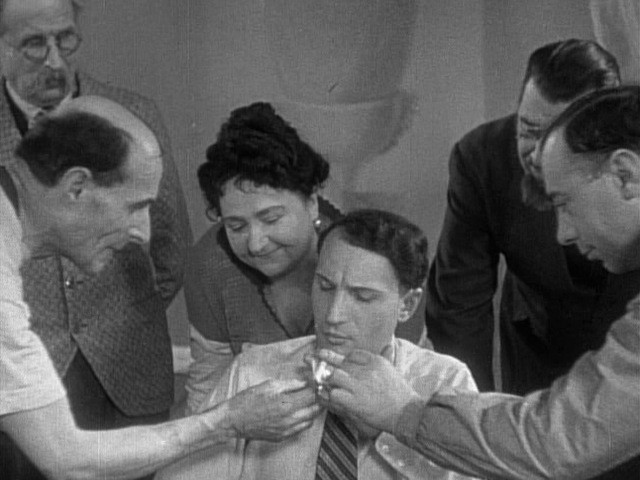 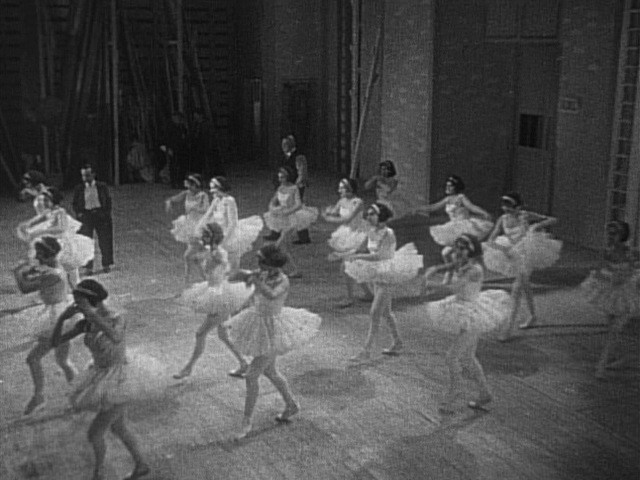 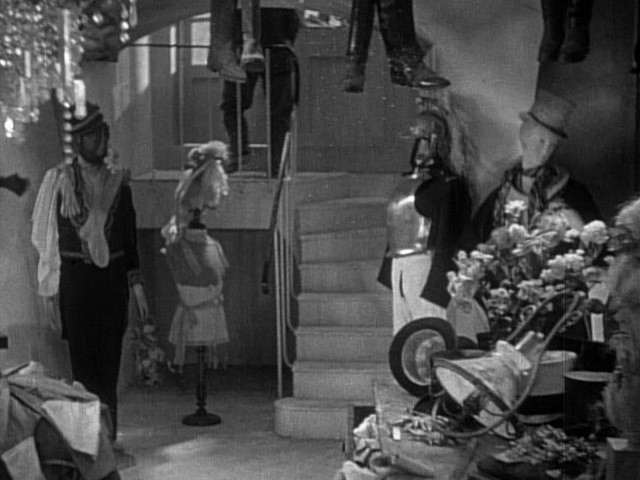 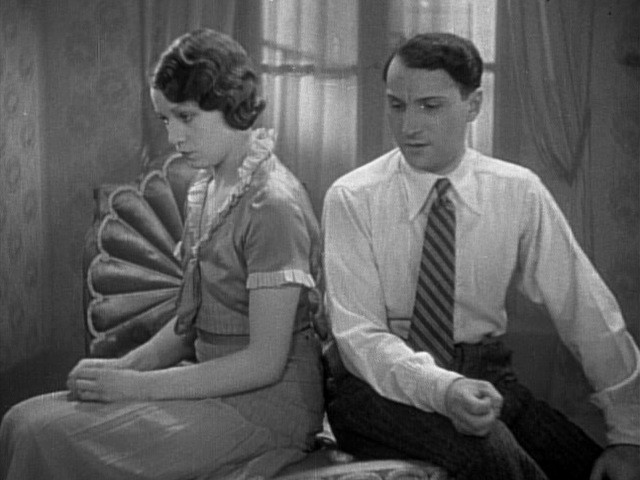 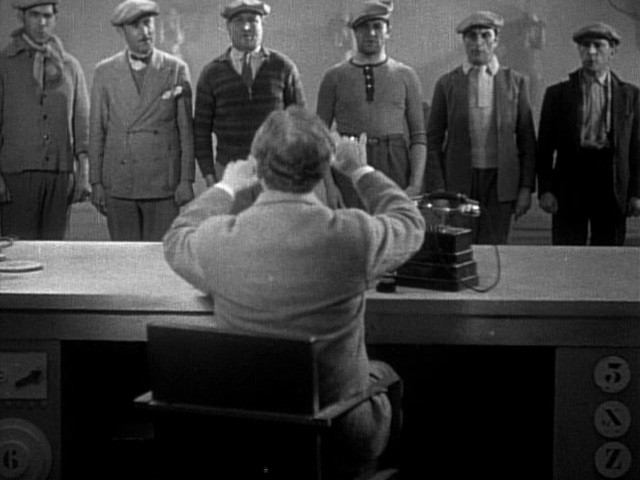