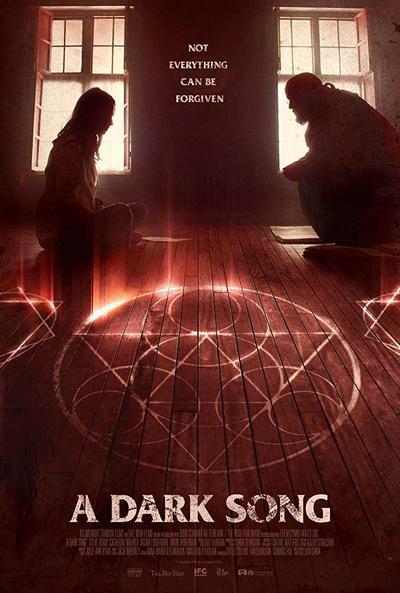 Synopsis:
Sophia Howard rents a house in the countryside of Wales and hires the occultist Joseph Solomon to contact her son that was kidnapped and murdered by teenagers practicing black magic. Along the days, Sophia follows the guidance of Solomon in rituals to purify her soul. However Sophia has a hidden agenda that jeopardizes their lives.

Review:
What does an occultist look like? From To The Devil A Daughter to The Ninth Gate, generations of horror films have invited us to buy into 18th Century French propaganda about an aristocratic elite, an image which figures like Aleister Crowley also cheerfully exploited for their own ends. Seek such people out in the real world, however, and you’re much more likely to find middle-aged bearded blokes in anoraks who possess an extraordinary wealth of ritual knowledge but wouldn’t have the first idea which fork to use for the fish. Joseph (Steve Oram) is one such bloke. He’s not so hot on social niceties but he has a reputation for getting things done. And that’s all that Sophie (Catherine Walker) cares about.

Sophie is desperate. Her son is dead. She has liquidised all her assets, taken a lease on a remote Welsh country house where certain rituals might be performed in secret, and spent months purifying herself. She has also, plainly, spent months on research, though Joseph is suspicious of her patchwork knowledge and chides her about “looking stuff up on the internet.” He’s unimpressed by her cover story, that she wants to win somebody’s love, and lectures her about the dubious ethics involved in that. He doesn’t come across like a charlatan out to steal her money. But she hasn’t told him everything, even now, and if the things that he claims are true, what she has held back could put them both in danger.
Copy picture

Played out almost entirely as a two-hander on stripped-down location sets, Liam Gavin’s bold debut film is well rooted in occult lore and has much to please horror fans, but also succeeds as a study of grief. The purging, the self-abasement and the cycles of mental application through which Joseph guides Sophie, sometimes gently, sometimes cruelly, directly parallel many people’s experiences of bereavement. Part of the deal is that, as her guide, he too will get to ask the thing she summons for a favour. What he wants is knowledge and understanding of the world. In a way, that’s also what she wants – whether she knows it or not. Walker’s performance as a woman mentally imprisoned by the strength of her own feelings is painful to watch, in a good way. It adds an additional logic to the intrinsic horror film ritual of struggling to survive against forces unknown.

Alongside her, Oram is reliable as ever. The ease with which he can dominate a scene is put to good use when he forces Sophie to submit to his will, but as the power balance shifts back and forth between them, he shows his generosity as an actor, stepping back to make room for her quieter but equally important work. Gavin’s script shows us little hints of Joseph as a man, of the life he lives outside all of this, and they’re enough make us fear for him. Moments of brusque comedy add to the sense of realism without breaking the spell.

A Dark Song is a thoughtful, grounded take on the search for meaning that mixes horror conventions with things still darker, yet which strains towards a transcendental moment which a lesser filmmaker would have been afraid to contemplate. Gavin has put himself firmly on the map.