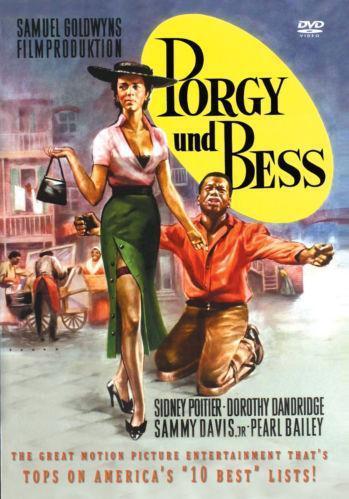 A stellar line-up of African-American actors and musical stars helped to bring DuBose Heyward and Ira Gershwin’s classic operetta to this screen in this lavishly-produced adaptation. Porgy (Sidney Poitier) is a crippled man living in the shantytown of Catfish Row who has fallen in love with Bess (Dorothy Dandridge), a beautiful but troubled woman addicted to drugs. Bess is already being courted by several men, including Crown (Brock Peters), a muscular laborer, and Sportin’ Life (Sammy Davis, Jr.), a sharp-suited hipster who deals narcotics. Crown gets in a fist fight with Robbins (Joel Fluellen) and ends up killing him; Crown goes on the lam, and Bess, needing companionship, takes up with Porgy. However, Crown soon returns, and Porgy kills him in a subsequent altercation, forcing him to hide from the police. Meanwhile, the fickle Bess follows Sportin’ Life in search of the bright lights of New York City. Pearl Bailey, Diahann Carroll, Ivan Dixon, and Clarence Muse also highlight the cast; Robert McFerrin provided the singing voice of Porgy, and Adele Addison dubbed in Bess’ musical numbers. — Mark Deming