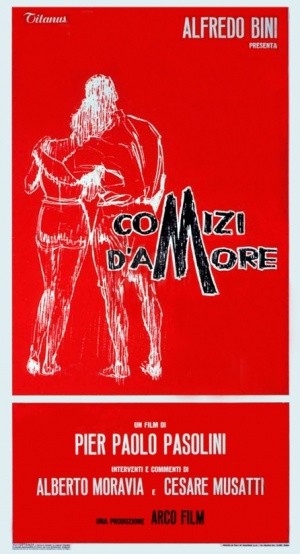 Pasolini doesn’t so much ‘meet’ with people of all regions of his country as interrogate them, trying to investigate the sexual mores of his time in a typical melding of politics and sex, of Marx and Freud. Although dated, it’s vital as a time capsule of 60’s Italy and as a man-on-the-streets pseudo-sociological examination of then-prevalent attitudes towards homosexuality, marriage, prostitution and divorce. The execution and image quality is rough – even for Pasolini – thought it’s no doubt intentional and a visual reflection of the project’s spur-of-the-moment, pieces-sewn-together approach. I’m a lot less sure as to why he chose to self-censor some sections of the picture instead of merely trim the film down (perhaps to infer that the silenced sections are more risqué than they probably were) since the films he would make after this point in his career – his most notorious works, including Teorema and Arabian Nights – were anything but shy about sex.