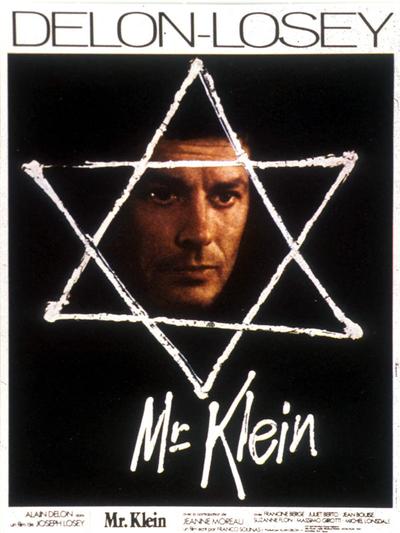 How can state-sponsored bigotry destroy the life of an “ordinary” citizen, one whose heritage should exempt him from such policies? The eponymous Mr. Klein (Alain Delon), a suave, single, wealthy Parisian art dealer, finds out. It’s 1942, the Nazis have occupied Paris, and Jews are being arrested and shipped to Germany. The lucky ones obtain false passports and flee the country. Robert Klein, whose family has been “French and Catholic since Louis XIV,” is taking advantage of the situation by buying up Jewish family heirlooms at rock-bottom prices. Then one morning a Jewish newspaper appears on his doorstep, addressed to Robert Klein. The fact that he received mail intended for another Parisian Robert Klein–this one a Jew–must be a simple mistake. But is it?
Mr. Klein becomes obsessed with finding his Jewish alter ego, finally falling into a trap from which it is impossible to escape. Directed by Joseph Losey, who confronted prejudice in The Boy with Green Hair, and written by Franco Solinas, coauthor with Costa-Gavras of such classics of political intrigue as State of Siege, Mr. Klein is haunting and suspenseful: an exciting thriller with real substance. (-Laura Mirsky – Editorial Reviews – Amazon.com)