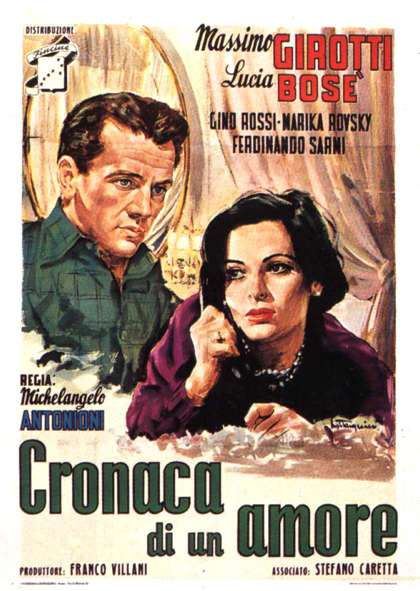 Quote:
Paola is a young, beautiful woman married to a wealthy entrepreneur. She meets her former lover Guido after seven years, but their relationship is marked by tragic events. 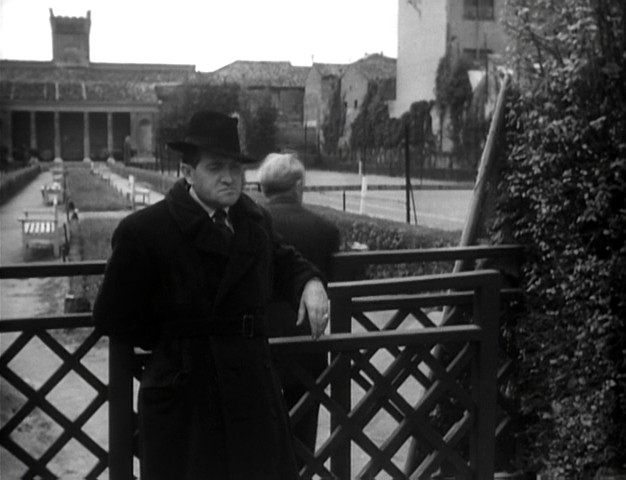 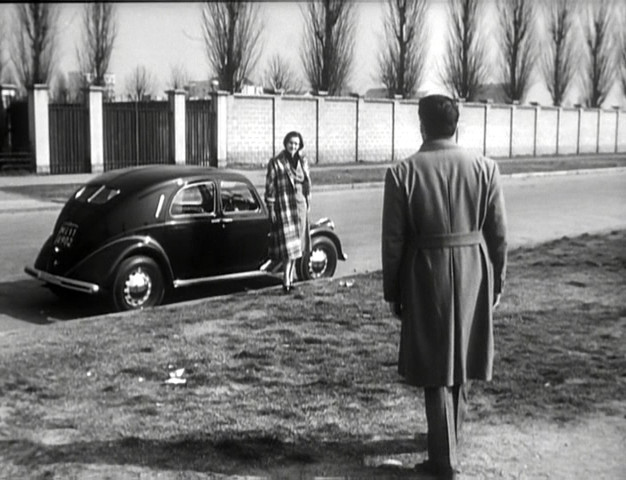 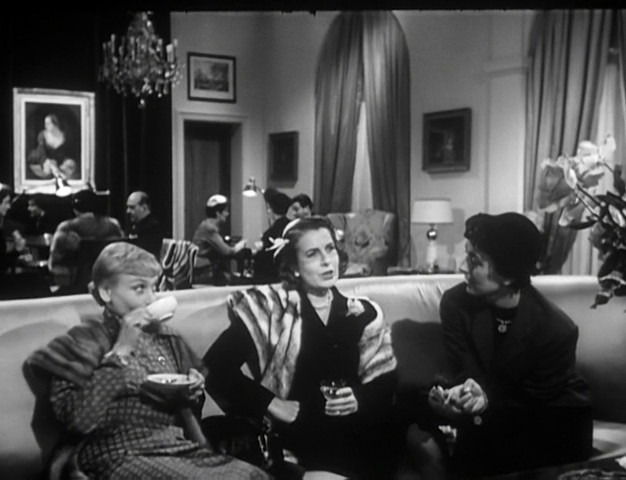 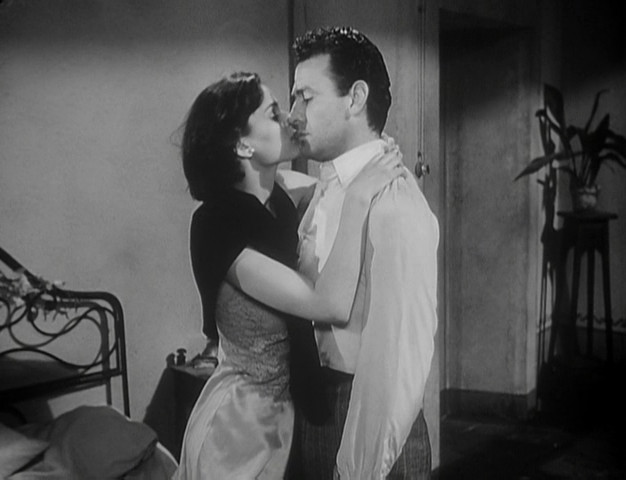 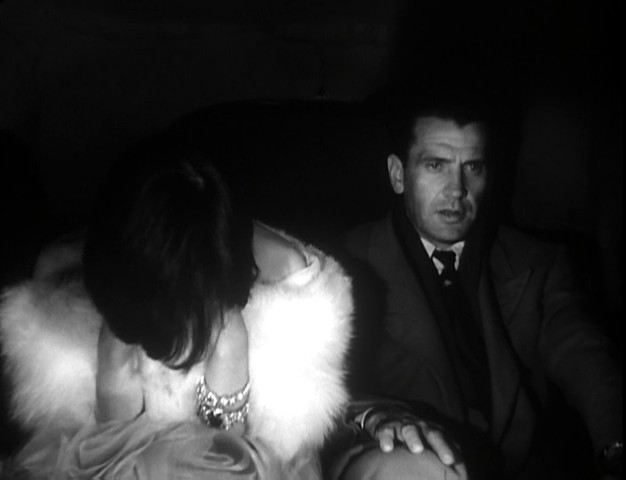 Quote:
More and more, DVD is in the position of resuscitating and saving a director’s reputation, or at the least reminding us and keeping current what was and is still important in a particular work. Michelangelo Antonioni is a case in point. Indeed, a viewing now of his first film Cronaca di un amore (Story of a Love Affair, 1950) — available on DVD from No Shame — comes at just the right time, if only to start countering the very bad effects of Antonioni’s contribution (“The Dangerous Thread of Things”) to Eros (2004). This kind of portmanteau film — popular in the sixties, where three or four star auteurs would be brought together to contribute on a common theme — rarely works, but that hardly prepares one for the embarrassment of what is presumably Antonioni’s last film (he’s 92 now and by all accounts has been suffering from the effects of a stroke for many years). Eros‘s other two contributions — Wong Kar-Wai’s “The Hand” and Steven Soderbergh’s “Equilibrium” — are both relatively successful, even if Soderbergh’s is nothing more than a little jeu d’esprit; and the appeal of Wong’s brand of retro sixties impressionism is decidedly wearing thin. But Antonioni’s short film is simply bad, marred above all by appalling dialogue, inferior acting skills, and laughable “eroticism.”

It’s a relief then to turn to this film of half a century ago. It’s hard not to look at Cronaca di un amore with the hindsight of Antonioni’s later films, reading into the film the early signs of what was to come: the exploration of failed or failing relationships, the anomie of modern life (in particular of the upper classes), the formal interest in the architecture of space. For a serious Italian film of 1950 and a first feature film, it is notable for the way it denies some of the key aspects of neorealism — the interest in simple stories of the working classes, with a clear social message and the use of non-professional actors — and it was attacked for this at the time. Antonioni’s own background was in neorealism, with a series of documentaries that seem very much in the spirit of the times in their depiction of everyday life, most prominently in Gente del Po (People of the Po, 1947) on the life of poverty experienced by those living along the banks of the river Po, and N.U. — Nettezza Urbana (1948) on street sweepers in Rome.

But it’s worth noting that even in those short films that seem most in tune with the neorealist spirit, the interest in aesthetics and the poetry of the visual image are as important as any social commentary. During the Second World War he did after all work on Fascist films and as assistant director to Marcel Carné, whose artifice and formal control — although to very different effects — show parallels with the mature Antonioni.

In addition, a clear differentiation between Cronaca and classic neorealist films is shown in its use of genre elements, specifically the film noir aspects. Francesco Maselli, Cronaca‘s assistant director, talks on No Shame’s second disc of the direct influence of such films as Wilder’s Double Indemnity (1944), Hitchcock’s Shadow of a Doubt (1943), Siodmak’s The Killers (1946), and Dassin’s The Naked City (1948). It’s true that Visconti’s early neorealist Ossessione (1943) was an adaptation of James L. Cain’s 1934 novel The Postman Always Rings Twice (itself made into a Hollywood noir under Tay Garnett’s direction in 1946), but in contrast Visconti’s film has no interest in these genre elements, instead grounding itself firmly in a depiction of a working-class reality.

Antonioni asserts the genre elements from the start, for the early part of the film follows the investigations of a private detective. He has been hired by rich Milan industrialist Enrico Fontana (Ferdinando Sarmi) to investigate the past of his much younger wife Paola (Lucia Bosé), a native of Ferrara. This investigation has the ironic effect of reuniting Paola with her former lover Guido (Massimo Girotti) and restarting their affair. The private investigator soon drops out of the story, but the crime genre elements remain. There’s the mystery surrounding the death of Guido’s former lover in Ferrara, who fell into an open lift shaft, but Guido and Paola’s guilt about and responsibility for her murder — if murder it was — has a typical Antonioni twist: the death occurred through their inaction, their failure to warn the woman of the danger. Then later in the film we have the lovers’ plan to murder Paola’s husband, whose execution is similarly ambiguous. What is the cause of Guido’s failure to act here — self-doubt, cowardice, or moral qualms? In any case, Fontana’s unrelated death in a car accident offers no resolution to the lovers’ status.

In the 1950s, prominent critic Gian Luigi Rondi — in an attack common to the pro-neorealism critics of the day (as the documentary on No Shame’s second disc relates) — accused Cronaca of being merely an “emblem of the middle classes,” an uncritical representation of bourgeois lifestyle and values. It is certainly true that the film betrays an indulgent fascination with the surface of Milan upper-class life, above all in the way it almost obsessively displays the gorgeous Lucia Bosé (the nineteen-year-old former Miss Italy, playing a twenty-seven-year-old in the film), decked out in luxurious designer clothes.

But in fact Rondi’s criticism is rather obtuse, for it’s blind to the clear elements of social criticism in the film. Questions of money and class are predominant. The differentiation between the lovers’ past in Ferrara and their present in Milan underlines the economic and class differentiations at stake, further emphasised by Guido’s resentment at his inferior financial position and Paola’s overpowering drive to escape from her Ferrara roots into the rich world of Milan’s upper classes. This contrast between the two is given visual expression in their first meeting of the film, with a shot/counter-shot which plays off Paola in a full-length white fur coat, standing against the background of the clean, classical lines of a stone theatre building, against Guido in his shabby suit, standing in the middle of the street with a busy line of commercial stores behind him.

Already in this first feature, Antonioni is making confident and assured use of space and setting, and the composition of figures within a setting, in order to comment on his characters’ psychology and motivation. So the camera pans from the scene of Guido watching the open expanse of a rugby field (he’d played rugby in earlier years) to a line of trees and a high wall as Paola arrives in her car, emphasising Guido’s sense of failure, the narrowing-down of possibilities in his life, the limits, restrictions and constraints on his present life, and the way his re-encounter with Paola will not offer him any kind of escape. And a later scene on a staircase that winds itself round an open lift shaft is a tour-de-force of this style of rich filmmaking.

As the story progresses, Paola’s character increasingly takes on the classical femme fatale role. She’s the strong one — “You’re mine,” she tells him; she’s often in command — “Kiss me … now!” she orders on the staircase (characteristically, he runs off); and she recognises the truth of Guido’s character: “You seem so strong, but you’re weak.” Most of all, she tempts him repeatedly with the idea of killing her husband, an idea that he repeatedly recoils from. We never witness Guido’s final agreement, just the aftermath as they stand on the bridge in the countryside, planning the murder. But now they are no more together than before; in fact, now it is Paola who is confused and has second thoughts.

The murder plot offers the narrative drive, but it is not the core of Paola and Guido’s story. That is their shared feelings of guilt for Giovanna’s death, where, through inaction, they allowed her to fall down a lift shaft. But they are isolated and apart in this guilt; as Guido says: “Giovanna separated us in life and in death … We’re not happy and we never will be.” There can be no positive outcome to this relationship, and the film’s last two sombre shots underline this: a medium long-shot of Paola in her long white fur coat standing in the doorway of her house, frozen, pinned there even as the two arrows on the building on either side of her indicate; and a long shot of Guido’s taxi moving away into his own uncertain future, into the dark rain-swept night.