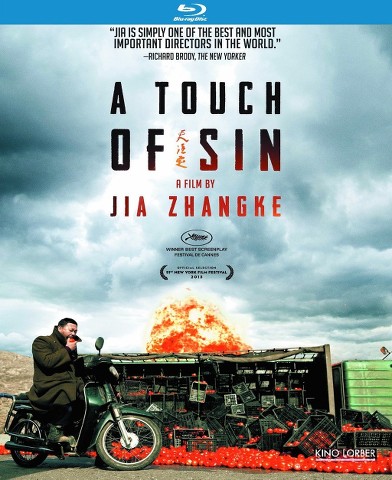 Quote:
An angry miner revolts against the corruption of his village leaders. A migrant worker at home for the New Year discovers the infinite possibilities a firearm can offer. A pretty receptionist at a sauna is pushed to the limit when a rich client assaults her. A young factory worker goes from job to job trying to improve his lot in life. Four people, four different provinces.

Jia’s world has its own geography. It (re)organized China into a personal map, where almost everything starts and ends in the filmmaker’s native province of Shanxi. It is the starting point and the ultimate “home.” This is where Xiao Wu the pickpocket operated, where the itinerant performers of Zhantai (Platform, 2000) roamed, where the sad heroes of Ren xiao yao (Unknown Pleasures, 2002) burnt their lives out, where the migrant worker of San Xia hao ren (Still Life 2006) and Shijie (The World, 2004) came from. This is where Tian zhu ding starts and finishes at the end of a tragic “tour.” The cities of Fenyang or Datong, the countryside and the murderous privatized coal mines have long been a compass to Jia’s filmic China.

Here Shanxi has two “alter ego” characters. One is called “Sanming,” and the other is played by Wang Hongwei. Wang Hongwei was Xiao Wu, and Xiao Wu has a filmic biography that made him a small town crook again in Ren xiao yao. In Tian zhu ding, Wang/Wu dies under the blade of the film’s lady knight, played by Zhao Tao. He did not make a big fortune, his money came from local corruption. The banknotes he slaps Zhao Tao’s Xiaoyu with are somehow archaic: archaic money compared with the very modern money of the clients of the night club “Golden Age.” We see the class differences among crooks and bullies.

The other character mirroring Shanxi and Wang’s Xiao Wu is “Sanming,” the miner, the worker. Not a “favorite actor” and maybe hardly a regular “film character;” more a person and a figure of destiny. Sanming’s status never changes. Time has passed, from his place in Platform as the “about to work at the mine” cousin of Wang Hongwei’s character, to his story as a Shanxi miner looking for his fiancée in Still Life. “Sanming” has not changed: In Tian zhu ding, he is the first person Dahai meets when entering the mine canteen, and the one who sees him off when he goes “hunting.” He is on the boat to Chongqing-Fengjie where we meet again the assassin San’er (actor Wang Baoqiang, who started with Blind Shaft, a film about miners, before becoming a huge TV star). An almost voiceless worker, whose low-key design is the representation of a “prolonged sorrow,” “Sanming” is a figure of the people, the “lao bai xing (“old hundred surnames,” old being here the adjective for a warm touch), workers or peasants, younger or older. Yet Jia’s vision is neither a nostalgic nor a merely compassionate one: it is subtly lyrical. “Sanming” is the hero of a ballad than is sung from film to film, whose virtues are told in an undertone, far from the glossy vulgarity of official images and globalized show-business. In Tian zhu ding, “Sanming” has a younger avatar: Xiao Hui lives the fate of the new age of Chinese industrial boom. Textile and computer factories, huge dormitories, quickly built cities and malls are the coal mines of a globalized economy.

Jia’s geography has its bitterly ironical El Dorado. It is a place that is never seen, but mentioned and referred to in all his films: Mongolia, the province north of Shanxi. “It snows over Mongolia and Shanxi” says the weather forecast Lianrong reads to Xiao Hui at the Golden Age. Mongolia as a mysterious promise of another life, the goal of a journey that will never be made, a dream place, even if a real one. An utopia never to be realized, a new home never to be found, or a “next world” for hungry ghosts. In Tian zhu ding, the Mongolia of San’er’s bandit is Burma, a place where guns are cheap. To each his El Dorado. On Jia’s map, the “capital city” is never seen. It has a name, though: “Zhongnanhai in Peking.” This is where Dahai wants to send his petition. Zhongnanhai is the domain which serves as central headquarters to the government and the Communist Party Central Committee. Some call it “the other forbidden city.” In Tian zhu ding, it is enough for Dahai to write the name. But the post office girl insists that “the address is incomplete.” Another Mongolia, another illusion.

Jia’s geography has a central region: the provinces of Sichuan and the neighbor province of Hubei. This is where Tian zhu ding’s Sanming is going to spend the New Year’s holiday. More specifically, in the city of Fengjie that was wiped out of the map by the Three Gorges Dam (Still Life). San’er is headed to his home village halfway between Wuhan and Chongqing, while Zhao Tao/Xiaoyu’s home city is Yichang. Thus, the triangle where the Three Gorges Dam is. The filmic “central region” is the huge controversial symbol of a country’s official politics of “modernization.” An emblem, a key reality to tell the wiping out of the past, the uprooting of millions. Destruction disguised as construction: a leitmotiv.

Going South means heading toward the “modern world”: a globalized universe where hopes and necessities are confronted with the updated forms of oppression, as dreams are challenged by the glossy illusions of globalized high life. In the South are the “special economic zones” in the province of Canton: the megalopolis of the Pearl River delta (one of the first to open to foreign investments) and Dongguan, where young worker Xiao Hui meets Lianrong, before injustice catches up with him and throws him into despair. In Jia’s geography, the South is the place where linguistics complete the mapping. With extreme attention and precision, he makes every character (professional actor or not) speak the “right” language: whether through dialect or the use of accents. Language is the constant reminder that someone is “from somewhere,” geographically and socially. In the never ending travels of the migrants, dialect is the fragile link with “home”, the basis for some solidarity, the last trace of a personal identity. The presence of national standard Chinese (continental putonghua and Taiwanese guoyu) is clearly here an occasion for a critical variation on “newspeaks”: the communist vocabulary is a farce in the “leader’s train wagon” sex play, television shouts the bombastic formulas of “harmonious” society, the welcoming sentences imposed by the night club manager are the archaic formulas of old times servility, and the businessmen’s language is an anthology of readymade managerial slogans. There is a crisis in language. Dialects and accents are a territory where language is neither “communication” nor coercion but a fragile means of free expression and resistance. […] (Marie-Pierre Duhamel)