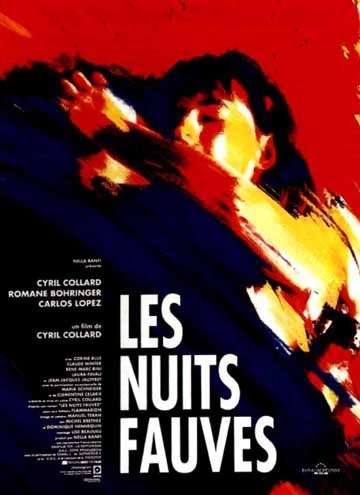 Quote:
This shocking (and shockingly good) French drama makes up in sheer visceral power whatever it lacks in brevity and pacing. The semi-autobiographical tale of an HIV-positive musician, photographer, and filmmaker, Cyril Collard’s Les Nuits fauves has the talkiness of French New Wave, the cultural fluency of early-’70s Hollywood, and the personal/political urgency of the early-AIDS epidemic. On paper, the story sounds like one that’s been told too many times: Selfish artist type screws whomever he wants, whenever he wants, and pays the price. Quote:
But on film, Collard transforms the stuff of tawdry biography into a compelling portrait of unspeakable yearning and joie de vivre. Basically playing himself, the director and star charms his way through concurrent affairs with a precocious but unhinged schoolgirl and a pouty, strapping young rugby player. Touching all who meet him but unable to be touched, Collard’s Jean destroys lives out of carelessness even as he tries to learn to leave the world better than he found it. Those without much stomach for the self-indulgent may find the endless permutations of Jean, Laura, and Samy slamming together and spiralling apart to be more exasperating than fascinating. But such an improvisational, freewheeling look at the messier side of emotional lives will strike the right kind of viewer as downright liberating. Quote:
Romane Bohringer gives a fierce, startling performance as Laura, the young woman whose trust and possessiveness consume her, while Carlos Lopez radiates tenderness and tightly coiled violence as Samy, the young man coming to terms with his own perverse tastes. Both actors have the sort of extreme, offbeat faces of which art house pin-ups are made, but their performances here are far more than the sum of their sculpted cheekbones or liquid eyes.

Quote:
If the film falters once these two characters have faded to the background of Jean’s quest for meaning, well, at least that unfortunate shift occurs just ten minutes before the credits roll.

Quote:
And if Collard wanted to nail down his final film with an explicit statement of purpose, well, that’s his prerogative. It’s still a stunner, warts and all.
–allmovie.com