Undeniably one of Hollywood’s greatest actresses, Katharine Hepburn nonetheless only had one voice. She used it to massive effect but anything that really warranted an utterly different accent tended to make her look horribly miscast. Of all the great actors she was the one who seemed to be horribly miscast most often, whether it be as a Chinese peasant girl, a queen of Scotland or a backwoods hillbilly. Here, playing the nineteenth century pianist and composer Clara Schumann, I expected another horrible miscasting, but found that the film’s very human story utterly engaging regardless what accents are brought to bear.

It doesn’t hurt that Hepburn is utterly believable in the opening scene performing virtuoso piano music at the Royal Opera House in Dresden, something that requires her to act but not speak.It’s 1839 and she’s still Miss Clara Wieck, building a powerful career as a pianist through the teaching and guidance of her father, sheer unbridled talent and no doubt an appreciation of how good she looks in a concert gown. It can’t hurt that the performance we see is a command performance for the King of Saxony with people as important as Franz Liszt accompanying the royal family. This story of her life and those of other prominent composers with which it interwines is told with the usual adjustments to literal truth but it is at least honest enough to admit it from moment one. ‘Certain necessary liberties have been taken with incident and chronology,’ it tells us, and even though I’m not well enough acquainted with the real versions to know which scenes are real and which are liberties, it’s not difficult to work them out, at least some of them. For instance, I’d bet that the real showdown between Professor Wieck and young Robert Schumann for Clara’s hand doesn’t come on the stage at a command performance. Wieck wants his daughter to play, to go on to a great career. Schumann, who had studied with them for years, wants to marry her, and Clara is all in favour, even though she’s ten years younger. She even changes her encore to play a piece of Schumann’s, impressing the young prince no end but surprisingly not furthering the composer’s career too much. It takes Liszt’s intervention in court for the judge to rule in favour of their marriage and that’s unfortunately it for Leo G Carroll’s part as her father. It all rings of Hollywood script manipulation, but done by a Hollywood that knew how to do this sort of thing without making us throw up our hands in disgust. Unless we knew the history, of course.

The years fly by and a decade later the Schumanns are struggling by with seven kids and living on Robert’s meagre earnings as a music teacher. Into this madhouse comes Johannes Brahms to study, picking not just New Years Eve but the night that Bertha the housekeeper quits to make his entrance. The conveniences continue throughout, Schumann tottering on the brink of melancholia just as his opera comes back with a rejection letter, prompting some notably Hollywood shenanigans to be set in motion by Brahms and Liszt, not always just a favourite in Cockney rhyming slang. It’s all as sweeping and grandiose as much of the music is tender and romantic, but it’s done capably and professionally and while these seams show they don’t feel glaringly obvious. They may be liberties, but they’re crafted as such.

It would be strange for a story all about musicians to not be full of music and Song of Love doesn’t skimp on that front, as much as the title is as much about the relationship of the Schumanns as it is the music they compose and play. It’s wonderful music too, of course, and the majesty of the production does justice to it, wisely treating us to a number of scenes of discovery, always the best emotional scenes in my book. To my mind the emotion when the Schumanns first hear Brahms play is the same emotion as when Jeff Goldblum first sees the dinosaurs in Jurassic Park. It’s real swell in the throat stuff because we don’t just see or hear what’s there but the possibility and promise of what will follow, the magic of a lifetime and a moment all at once. ‘I wish I could write something like that,’ says Schumann, the master speaking to the student and the would be student at that.

All the names involved live up to the lofty challenges they’re tasked with, playing these historical characters in the way that so characterised golden age acting, less as people and more as themes. Kate Hepburn is excellent, though she fails utterly to look 71 years old at the finale. I don’t know how adept she was on the piano but she really appears to be playing this often difficult material and that’s certainly not through the fakery of CGI or split screen or some other cinematic device, it’s real. If it’s acting it’s very capable acting indeed, if it isn’t then it suggests that she would at least have been worth listening to as a pianist. The same goes for Robert Walker as Brahms, in many ways the opposite of Robert Schumann. Brahms is utterly in control of his musical genius while Schumann struggles with his, yet Schumann has a grip on love that in turn Brahms has to struggle with.If Hepburn and Walker are pianists, at least believably so, it would seem that Paul Henreid and Henry Daniell, who play Schumann and Liszt, aren’t. They get plenty of opportunity at the keyboard but while we watch fingers play we don’t pan back to see these actors attached to them. They’re both excellent, all four of these actors playing off each other with appropriate warmth to keep such a song of love being sung until the very end of the film. There’s not much opportunity given to supporting actors, the story being woven closely around these four, but Carroll is spot on and Else Janssen impresses as Bertha, however much Brahms can wrap her round his little finger. With music like this to conjure with, that’s often what the filmmakers do to me, historical accuracy or no historical accuracy. 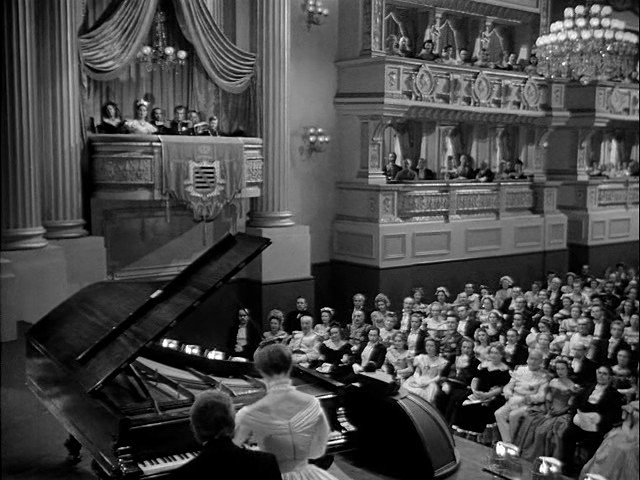 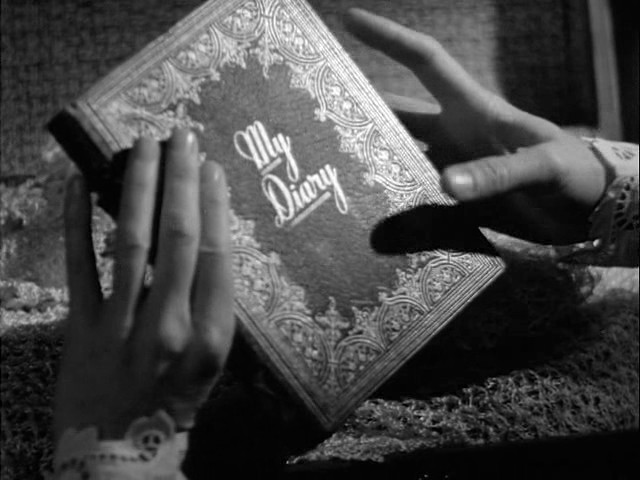 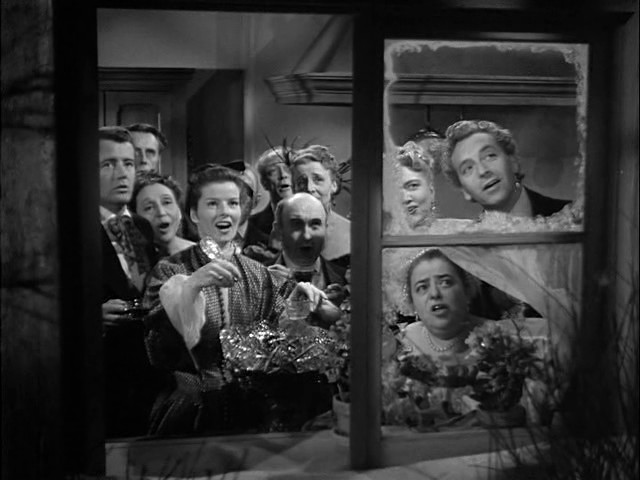 Previous: Kurt Maetzig – Der Rat der Götter AKA Council of the Gods (1950)
Next: William Markus – Verta käsissämme AKA Blood on Our Hands (1958)