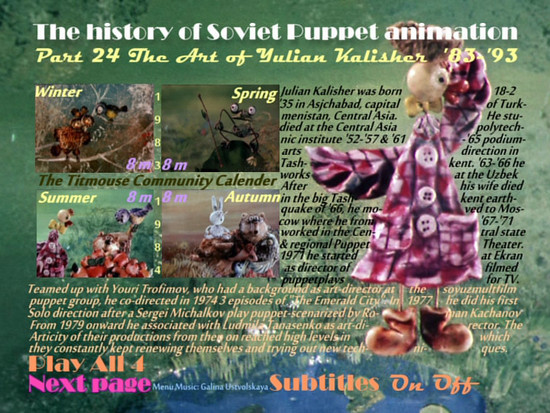 History of Soviet Puppet animation 24 – The Art of Yulian Kalisher

Yulian Kalisher ( 1935-2007) was a relative late-bloomer in the field of puppet animation. Coming from the field of puppet theatre, where he had worked in Tasjkent, Uzbekistan and in Moscow. He was hired by the Soviet TV organisation Ecran to direct puppet-plays for TV in 1971. In 1974 he was teamed up with Youri Trofimov and co-directed 3 episodes of The Wizard of Emerald City ( see DVD 17) In 1977 he realized his first solo-direction: a feature film puppet animation after a puppet play. From then on his work always stood out for its originality and inventiveness. “A New Year’s Adventure” on DVD 20 is a good example of his work between 1977 and 1982.
Russian animation uses the words Puppets and flat Puppets (in English called Cut-out) for stop-motion techniques, and cell animation for drawn animation. In the 1979 animation “Big secret for a little company”, although mainly a classic puppet animation, Kalisher mixes all 3 of them, using the technical possibilities to mix (puppet) film segments into flat puppet rushes. In the 1982 “Hercules Birth” he for the first time makes a film for a grown-up audience.
In the 1983/1984 Titmouse community films he starts using a technique developed by Leonid Aristov for which his now regular art-director Lyudmilla Tanasenko also was art-director. It uses sculptured baked clay flat puppets moved around in the middle layer of 3 layers of glass plates where the top and bottom layer mostly is used for fore-ground and background., Only Manyunya’s goose’s head is a classic puppet head on a stick with legs & feet , for the rest he is a flat used woolen mantle, although it can be opened so the puppet can be used as a flat as wel as classic 3D puppet. 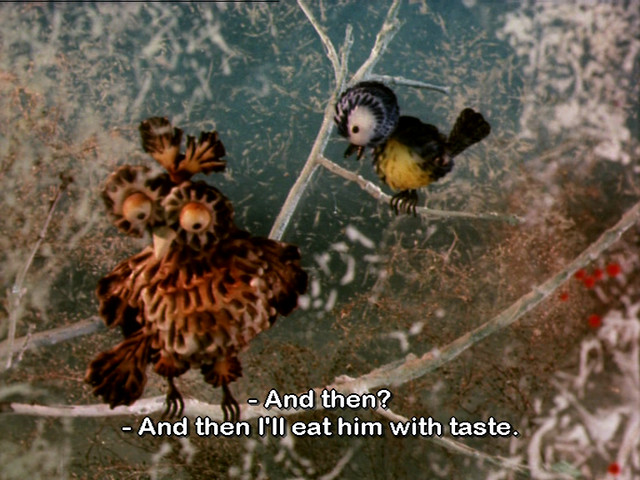 Summer, autumn ( 1984) (4 x 8m)
How a little taiga community of animals plus a puppet made by the girl Manyunya survives and flourishes through 4 seasons 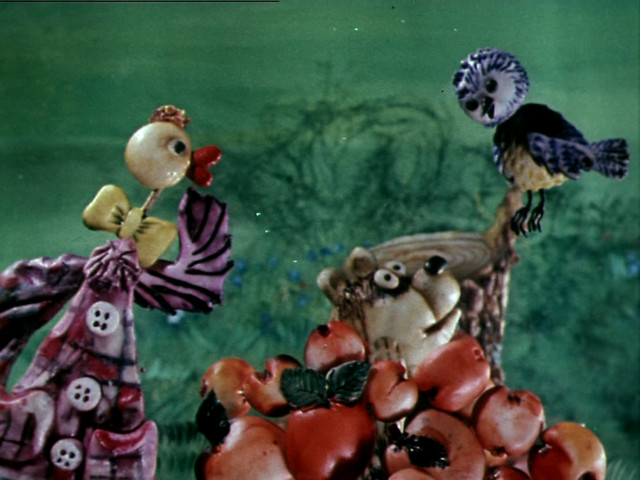 Menu 2
The Trunk, 1986, 8 m
Made after a slightly non-sensical poem and song by Youri Koval.
It’s the second of 2 cooperations between Koval and Kalisher. Art design wise it’s a key animation for Kalisher and Tanasenko, the art-director. I count some 8 to 9 different animation techniques, used through and over each other. Even 1 object is at a certain point a 2 D object, and a while later 3D in a completely different technique. 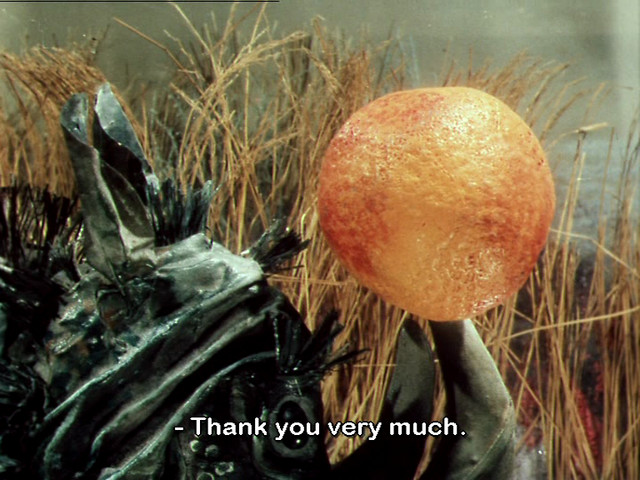 Why, Camel, Orange?, 1986, 9m
A bizarre, but amusing animation with song and music in a leading role. The animation actually consists of 3 smaller animations with each their own song. Why? Camel and Orange can be seen as titles for each small animation. In Russian “Why camel orange” is also a sentence. Why does the camel have an orange? Or What for does a camel have an orange? In each mini animation 2 animals have a sort of uncomfortable conversation in which one of them is a sort of a nuisance to the other. 1 A giraffe and a zebra. 2 A camel and a horse 3/ A rhino and a small monkey like animal that I don’t know the name of 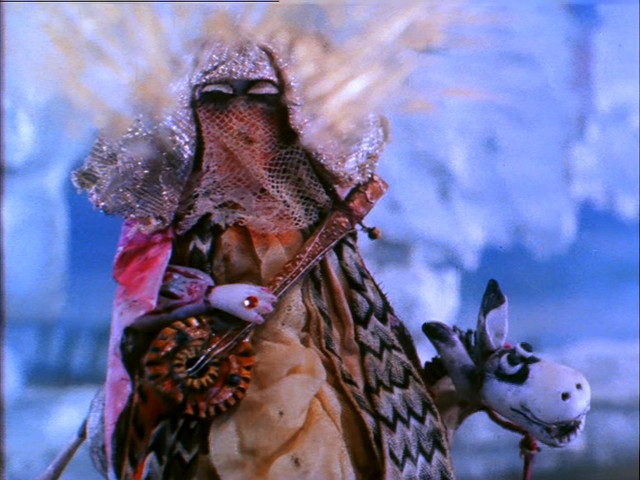 Ah, Princess! 1987, 10 m
The animation is made using quotes of Medieval Persian Poetry, to tell a fairytale love story between an wandering poet and a princess. To win her (and half the kingdom) he needs to fulfil 3 tasks given by the Caliph. The poem quotes are by Omar Kayyam (1048-1123) from Nishapur, now Iran; Babur (Zahiriddin Muhammad Bobur) (1483-1530) ( Founder of the Mogul Empire), born in Andijan in present day Uzbekistan; Nizami Ganjavi (1141-1209)  from Ganja, now Azerbaijan link , Ali-Shir Nava’i  ;(Alisher Navoi) (1441-1501) link from Herat, now Afghanistan. Perhaps good to remind you that Kalisher comes from the Region. Born in Ashchabat (Turkmenistan), he lived and worked until 1967 in Tasjkent, Uzbekistan. Followed by “The barefoot Erudite”(1988), and “The Obedient Pupil”(1991) the animation shows an interest in respectively Persian, Chinese and Indian wisdom and mysticism, not very common yet at the time in the atheistic oriented Soviet Union
Menu 3
Words Of Wisdom, 1989, 9 m
based on the eponymous story by Mikhail Zoshchenko (the last of eight stories for children in the cycle “Lyolya and Minka” written in 1939)
When to keep silent at a diner-table with grown ups and when to speak up, a little life lesson for the 2 children Lyolya and Minka. Mikhail Zoshchenko (1984-1958)( as well as the writer Daniil Kharms (1905-1942) from the next animation stem from a an absurdistic, satyrical, avant-guarde writing tradition that got seriously oppressed and banned by stalinism. The 80’s where the years of their rediscovery. Zoshchenko was particulary popular because of his deadpan style. The statement that Kalisher takes is that one has to think for oneself and not follow 1 principle blindly, a statement that comes back more in his work, He often confrontates his characters with conflicting demands, in which they have to make up their own mind. 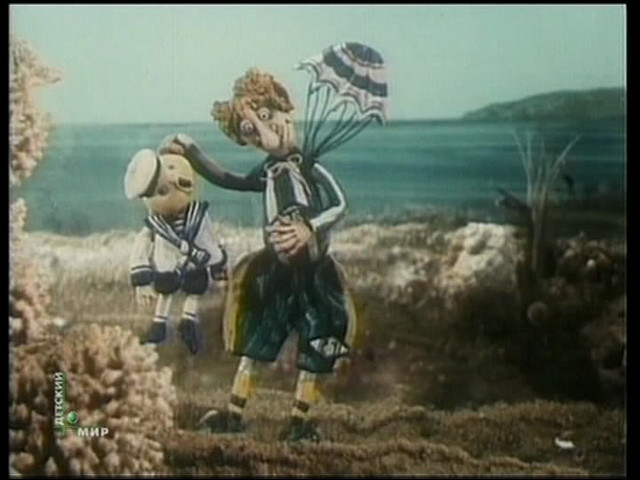 Pack! 1990, 16 m
based on Mikhail Zoshchenko’s “Galoshes and Ice Cream” (the second of eight stories for children of the cycle “Lyolya and Minka” written in 1939) and the play “Tyuk!” By Daniil Kharms (written in 1933). The animation doesn’t follow these tales but mix elements taken from them in a tale that sort of recreates the characteristics of both writers, using the same Lyolya & Minka puppets as the 1989 animation. Kharm was a radical absurdist and avant-guardist part of a collective art movement (Oberiu) related to the painter Malevich, the poet/writer Mayakovski and Russian Futurism in general. He was several times arested, exiled and in 1941 ended up in a prison psychiatric ward where he starved to death in 1942. In his lifetime he was never published (except some of his work for children), his works ciculated in “Samizdad” circles since the 60’s and 70’s, translated abroad in the 70’s and 80’s but only first published in the USSR in the late 80’s. The animation “Tyuk”(translated as pack) uses elements of Zoshchinksy, but in essence reflects the work of Kharms
Menu 4
An Obedient Pupil, 1991, 15m
Made after several Indian folk & wisdom tales. It tells about the absurdity to follow philosophical truths to the letter. One needs to follow ones inner truth and weigh it with ones common senses and ones circumstances. He also plays with his audience by in the end having the wise man in the tale plead for the opposite. So what does one think oneself..?. In the art-direction new and various ways of using paper are being explored in Kalishers last 3 animations. You could also say that this particular animation reflects the Russian situation at the time, with all kinds of Western countries advising & influencing the russian govenment how to proceed dismantling the USSR and stepping over to a capitalistic economy ( with “shock”therapy), which resulted in a 10 years Rulership of all kinds of criminals and the Ultra-capitalistic Putin kleptocracy that’s ruling now. 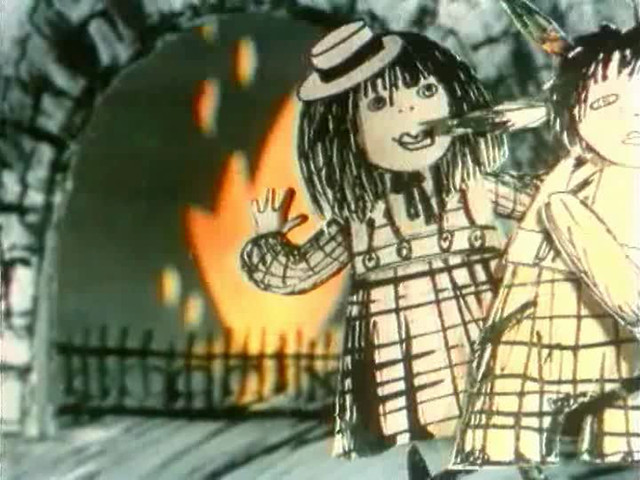 Little Orphan Annie, 1992, 10m
Free after the slang American James Vicomt Reily’s poem. Kalisher used a free Russian translation of the poem. Rather then to translate that back I used the American original, although the imagery it evokes and the rhythm it uses is sometimes different in the Russian translation and thus the animation based on it. In the art design cutouts are used as if they were classic puppets, which gives the animation it’s peculiar character.
Menu 5
The War between Elephants and Rhinos, 1993, 7m
Free after some segments of “The Travels of Babar”(1932) by Jean de Brunhoff by some mischief of a little elephant a war between Rhino’s and Elephants breaks out, but get solved by king Babar’s care for art. Again a new way of using paper is applied, a way of (re)using newspapers actually