Carl Boese & Paul Wegener – Der Golem, wie er in die Welt kam AKA The Golem: How He Came Into the World (1920)

In 16th-century Prague, a rabbi creates the Golem – a giant creature made of clay. Using sorcery, he brings the creature to life in order to protect the Jews of Prague from persecution. END_OF_DOCUMENT_TOKEN_TO_BE_REPLACED

Quote:
Although only Dreyer’s third film, The Parson’s Widow is an astonishingly mature achievement. Many of the director’s chief characteristics can be recognised, appearing not as blueprints but in their already fully-realised form. To people who only know his more celebrated later works, the most surprising feature of The Parson’s Widow is its humour. Its comedy is in the tradition – as becomes a Swedish production of the time – not only of Mauritz Stiller’s well-known frequentation of the genre, but also of some of Victor Sjöström’s less widely seen or underappreciated masterpieces, such as Hans nåds testamente (His Honor’s Testament, 1919) and Mästerman (1920). All of these films are quiet, poignant comedies of love and ageing, strangely foreshadowing some of Leo McCarey’s 1930s films. END_OF_DOCUMENT_TOKEN_TO_BE_REPLACED

In 1913, the popular novelist Bernhard Kellermann published Der Tunnel. It’s not quite science-fiction, more a prophetic fiction or realist fantasy in the vein of Things to Come. The book became a best-seller and the basis of a 1915 film directed by William Wauer. END_OF_DOCUMENT_TOKEN_TO_BE_REPLACED 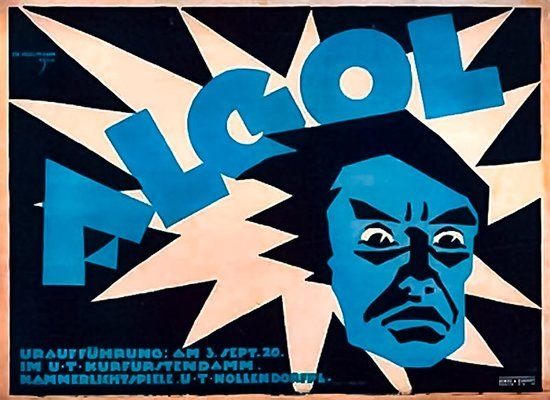 Quote:
“The rule of coal is gone. The bios plants will provide power to the world from today!” In this rediscovery of Weimar cinema, a dystopian vision of unfettered capitalism that is eerily contemporary, a coal miner makes a Faustian pact with the otherworldly Algol, an alien who teaches him how to harness the energy of his home star and become the most powerful man on earth. Together they become megalomaniacal CEOs of the “Bios-Werke,” lording over the nations of the world by monopolizing renewable energy and by turning workers into slaves. END_OF_DOCUMENT_TOKEN_TO_BE_REPLACED Dr. Henry Jekyll experiments with scientific means of revealing the hidden, dark side of man and releases a murderer from within himself. END_OF_DOCUMENT_TOKEN_TO_BE_REPLACED

Quote:
English doctor Professor Gesellius is in China researching the effects of opium. He frees a young woman named Sin from a den of inequity run by Nung Chiang. When he sails for home with the girl, Chiang swears vengeance. In England, it emerges that Sin is the illegitimate daughter of one of Gesellius’ colleagues, whose son is having an affair with the doctor’s wife. The son is poisoned and Gesellius becomes a murder suspect. He flees to India with Sin, pursued by the vengeful Nung Chiang … END_OF_DOCUMENT_TOKEN_TO_BE_REPLACED