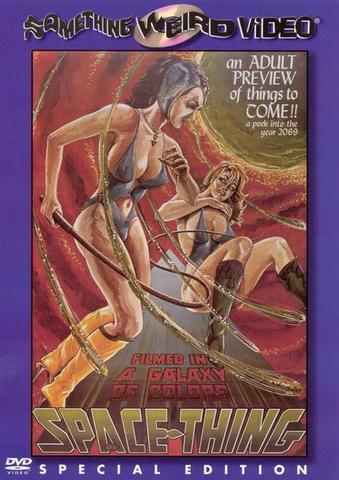 Visit the ‘Planet of the Rapes’ with Captain Mother and her sultry crew of sadistic lesbians in this campy ‘peek into the year 2069.

A man is in bed reading Sci-Fi mags, and his wife seduces him. He then falls asleep, and the rest is his dream.
He is from an alternate world, and disguises himself as an alien, then boards their ship, to keep them from attacking his planet.
The captain is a woman, who has two lesbian encounters with her crew, and whips one of them for trying to have sex with our hero.
All of the women are anxious to seduce our hero, as the other two men on the ship are not very exciting.
Our hero forces a landing on an asteroid (actually the outskirts of Palmdale, California) and everyone runs around topless and has sex. He then blows up the alien ship in the worst special effects explosion. END_OF_DOCUMENT_TOKEN_TO_BE_REPLACED Hang on to your turbans! Despite the title, this isn’t about New York cabdrivers. The Lustful Turk is a wild and wooly depiction of life in an 18th century harem. It’s the kinky adventures of Emily (ABBE RENTZ), a blue-blooded English lass. She sets sail for India with her comely handmaiden, Eliza (HEIDI KRANE). While at sea, they are girlnapped by knuckle-dragging Algerian pirates. END_OF_DOCUMENT_TOKEN_TO_BE_REPLACED