FilmLinc wrote:
The late Belgian filmmaker Chantal Akerman brings us an intellectual comedy about a mother and daughter who find themselves living together for the first time in decades. Charlotte, a freelance writer, invites her recently widowed mother, Catherine, to live in her apartment, and the ensuing clutter becomes a source of irritation and strife. When Catherine decides to revitalize her career as a piano teacher, the claustrophobia reaches new and absurd levels. Charlotte continues to pursue her desperate quest for peace as Tomorrow We Move develops into a slyly Jewish tale of rootlessness and familial burdens. END_OF_DOCUMENT_TOKEN_TO_BE_REPLACED

Quote:
“Liberally adapted,” per onscreen credits, from Joseph Conrad’s first, same-named novel, helmer Chantal Akerman’s interpretation of “Almayer’s Folly” is as eccentric as “La Captive,” her take on Proust. Unfortunately, it’s not as disciplined as that earlier work, and this tale of a French colonialist’s fraught relationship with his mixed-race daughter seems thrown together on a low budget with a too-breezy disregard for cultural specifics. After a powerful opening scene and reasonably strong first act, the pic slowly leaks air. Helmer’s rep should ensure polite interest from fests and niche distribs with a track record of releasing Akerman’s work. END_OF_DOCUMENT_TOKEN_TO_BE_REPLACED

Devastating essay on exile, Là-bas (2006) is a crucial moment of Akerman’s life when she herself was confined to a rental apartment in Tel Aviv unable to bridge the threshold to the outside world, overwhelmed by the flooding of traumatic thoughts, fears and vulnerabilities awakened by her family’s history with the death camps. Impossible not to think of her last work and of the reasons why she left when watching Là-bas today, which was also shot in video and similarly takes the shape of a personal, cloistered chamber piece.
(Based on Andréa Picard’s article) END_OF_DOCUMENT_TOKEN_TO_BE_REPLACED

Quote:
New York City’s Monterey is a residence hotel; the residents we see are older, most live alone. The camera, usually stationery, begins with a look into the lobby. The film ends with a panorama from the hotel’s rooftop. There’s no soundtrack. The lobby is clean with granite floors. Men wear hats. People enter and exit an elevator. The camera looks out from within the elevator as doors open and close. People sit alone and motionless in their apartments. There are long shots of empty halls. Paint peels. The flooring on upper levels is linoleum. Hall lights are florescent. Doors open a crack then close. The film provides the feeling of what it’s like to live there. END_OF_DOCUMENT_TOKEN_TO_BE_REPLACED

A temporary apartment swap between a man in New York and a girl in Paris leads to hilarious developments. Henry (William Hurt) is a rich psychiatrist in his forties with a fantastic apartment in New York City. After his relationship breaks up he feels the need to come to himself. He puts an ad in the Paris edition of The Herald Tribune, in which he offers to swap his flat. The young dancer Beatrice (a role in which Juliette Binoche proves her great comic talent) pores over the The Herald every day to improve her English and sees Henry’s ad. END_OF_DOCUMENT_TOKEN_TO_BE_REPLACED

Quote:
What constitutes a deadly sin today? Seven of the world’s best-known women directors produce their own version of celluloid sin in this omnibus film. Helke Sander (THE GERMANS AND THEIR MEN) reverses GLUTTONY with her vision of Eve forcing her apples into the hands of a reluctant Adam. Bette Gordon (VARIETY, EMPTY SUITCASES) finds GREED during a fight in the ladies’ room of a luxury hotel over a lottery ticket. Strangers reply to director Maxi Cohen’s ad in a newspaper to share their litanies in ANGER. Award-winning director, Chantal Akerman, battles to overcome her SLOTH in order to complete her film, while Valie Export (INVISIBLE ADVERSARIES) strips bare notions of the skin trade in LUST. END_OF_DOCUMENT_TOKEN_TO_BE_REPLACED 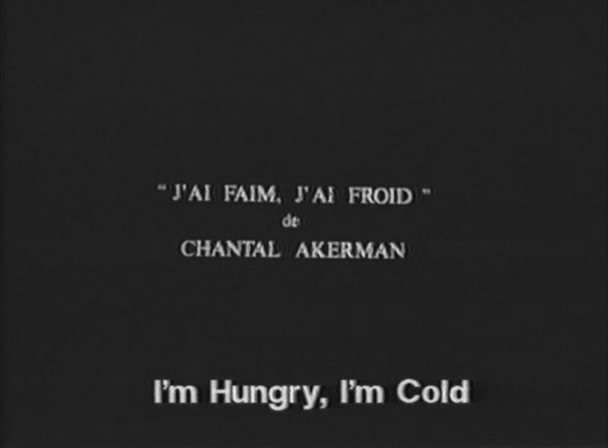 Chantal Akerman was 15 years old when she saw the film Pierrot le Fou by Jean-Luc Godard. According to Akerman, who was born in Belgium in 1950, this was the impulse that motivated her to be a filmmaker. Akerman attended the Film Academy in Brussels for four months, but says that she found no inspiration there whatsoever. At the age of 18 she shot the short film Saute Ma Ville and made her first mark in the annals of film history with an explosive master piece that continues to be shown at film schools and is regarded today as one of the central short films of the 20th century. END_OF_DOCUMENT_TOKEN_TO_BE_REPLACED