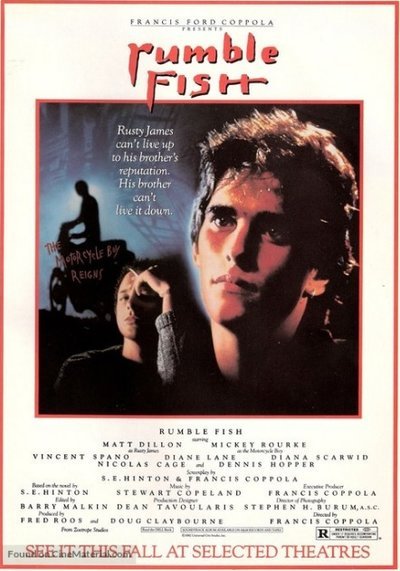 Harvard Film Archive writes:
One of the Coppola’s most overtly stylized works, Rumble Fish uses its breathtaking black and white, Koyanisqaatsi-inspired time-lapse photography and propulsive original score by The Police’s Stewart Copland to evoke a dream world of alienated youth. A beautiful postmodern art film, Rumble Fish is wonderfully uncertain of its time and place, stranding glittering icons of Fifties Americana – pool halls, flickering neon signs – within an Eighties post-industrial wasteland. The stylistic bricolage shapes the performances too, with Matt Dillon channeling Method Acting as a young man infatuated with the enigma of his self-absorbed brother, played with whispering intensity by a Marcel Camus-meets-Marlon Brando modeled Mickey Rourke. The late Dennis Hopper makes a poignant appearance as the absent even when present father who proves that the center inevitably cannot hold. END_OF_DOCUMENT_TOKEN_TO_BE_REPLACED

Quote:
Hank and Frannie don’t seem to be able to live together anymore. After a five-year relationship, lustful and dreamy Fanny leaves down-to-earth Hank on the anniversary of their relationship. Each one of them meets their dream mate, but as bright as they may seem, they are but a stage of lights and colours. Will true love prevail over a seemingly glamorous passion? END_OF_DOCUMENT_TOKEN_TO_BE_REPLACED

Quote:
Carefully observed and beautifully shot, the film that launched American Zoetrope 40 years ago is an early herald of Coppola’s talent for crafting delicate narratives that actors can sink their teeth into. Natalie (Shirley Knight) is a Long Island housewife trapped in a loveless marriage and stifled by domesticity. Two months pregnant and unable to bear her humdrum existence, she hits the road on a quest for freedom that Roger Ebert dubbed the “mirror image” of Easy Rider. END_OF_DOCUMENT_TOKEN_TO_BE_REPLACED 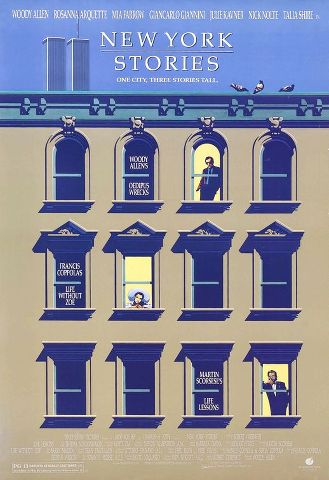 The omnibus film New York Stories is the product of three powerhouse filmmakers, with the best saved for last. The film is divided into three stories, each exploring a different aspect of life in the Big Apple. Life Lessons, directed by Martin Scorcese, is a Dostoevsky-like tale of the rarefied Art World, with Nick Nolte as a self-indulgent abstractionist who loves Rosanna Arquette, but can’t bring himself to lie to her about her negligible artistic talents. Life Without Zoe, directed by Francis Ford Coppola, is more than a little reminiscent of Kay Thompson’s Eloise stories, with 12-year-old Zoe (Heather McComb) running amok at the Sherry-Netherland hotel while her parents are embarked upon a world-girdling vacation. The last and (as we said) the best is Woody Allen’s Oedipus Wrecks, wherein a schnooky Jewish lawyer (guess who?) inadvertently “creates” the Jewish Mother From Hell: thanks to a misguided magic trick, Allen’s mama (the incomparable Mae Questel) becomes a huge spectral vision on the New York skyline, telling everyone within earshot about her son’s inadequacies! The cinematographer lineup on New York Stories includes Nestor Almendros, Vittorio Storaro and Sven Nykvist, whose very different photographic styles blend with for more harmony than the three directors’ approaches. END_OF_DOCUMENT_TOKEN_TO_BE_REPLACED 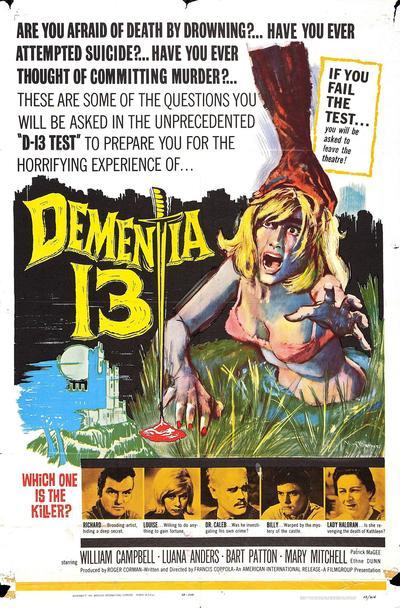 Dementia 13-Francis Ford Coppola’s black and white shocker is certainly one of the creepiest horror movies of an early 60’s.It predates all the slasher films made in 70’s and 80’s.Surprisingly spooky and atmospheric it contains plenty of axe murders(the decapitation of the hunter is especially memorable).The underwater scene is extremely creepy and the climax is well-handled and surprising. The film seems to be forgotten by many horror fans-it’s a classic and should be treated with respect!
If you want to be scared check out this creepy gem! END_OF_DOCUMENT_TOKEN_TO_BE_REPLACED 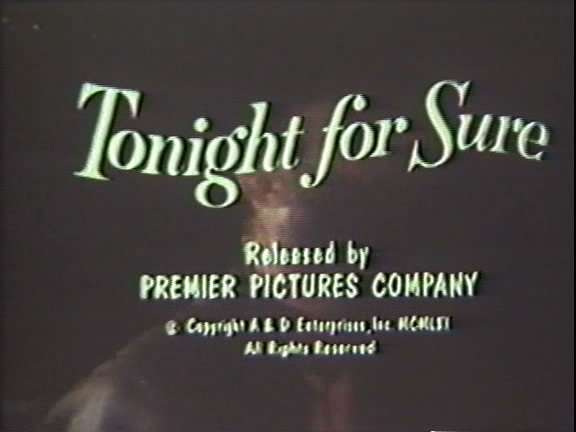 On the Las Vegas strip, two unlikely men rendezvous: Samuel Hill, an ill-kempt desert miner, and Benjamin Jabowski, a John Birch Society dandy from the city. Intent on some sort of mayhem, they enter the Herald Club before the burlesque show starts, and they wire something to the electrical box, set to blow at midnight. They sit at the back of the club to get to know each other. As they drink and glance at the stage, Sam tells of a partner driven mad by visions of naked women in the sagebrush; Ben tells a tale of trying to rid his neighborhood of a pin-up studio. As they get drunker and the clock ticks toward midnight, they pull their chairs closer to the women on stage. END_OF_DOCUMENT_TOKEN_TO_BE_REPLACED 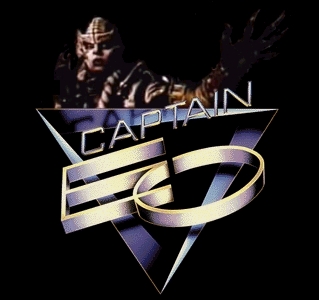 The film stars Michael Jackson. It was directed by Francis Ford Coppola, executive-produced by George Lucas, photographed by Vittorio Storaro, produced by Rusty Lemorande, and written by Lemorande, Lucas and Coppola. The score was written by James Horner, and featured two songs (“We Are Here to Change the World” and “Another Part of Me”) by Michael Jackson. The Supreme Leader was played by Anjelica Huston. from wiki END_OF_DOCUMENT_TOKEN_TO_BE_REPLACED