Kamila Andini – Sekala Niskala aka The Seen and Unseen (2017)

One day in a hospital room, 10-year-old Tantri realises she will not have much more time with her twin brother Tantra. Tantra’s brain is weakening and he has begun to lose his senses one by one. He now spends most of his time lying in bed, while Tantri has to accept the reality that she must soon face life alone. This situation opens up something in Tantri’s mind: she keeps waking up in the middle of the night from a dream and seeing Tantra. The night becomes their playground. Tantri experiences a magical journey and an emotional relationship through body expressions, finding herself between reality and imagination, loss and hope. END_OF_DOCUMENT_TOKEN_TO_BE_REPLACED

Synopsis:
Joni (Nicholas Saputra) is obsessed with film, and he’s not the only one, as he points out in a pre-credit sequence, in which we hear various Jakarta residents comparing their own lives to the movies that they love. Joni has made the movies his life, even if it’s just as a delivery man, using his motorbike to bring film reels from one theater in the city to the next, so that the canny exhibitors can save money on prints. Joni prides himself on always getting to his destination in time for the reel changes, so the screenings aren’t interrupted. END_OF_DOCUMENT_TOKEN_TO_BE_REPLACED

Based on a true character, GIE is a central yet unknown political activist/writer in the 60’s, the darkest era of Indonesian history. His life is a clash between a high drama of political events, and small world of friendship and romance. He is falling apart when he sees that his constant battle for justice and truth gives labor to another dictatorial regime. As time passes the people around him adjust to the new regime, but he continues to fight. His uncompromised idealism drives people away. His friends left him; the woman he loves rejects him. Only the beauty of nature can rescue and free him. END_OF_DOCUMENT_TOKEN_TO_BE_REPLACED

Cina was a Chinese-Indonesian Christian young man who got his name ‘Cina’ (China, in English) by misunderstanding in his birth registry and is pursuing his dream to get a scholarship in an architecture faculty in Bandung, Indonesia. He was against his father’s plan for him to leave for Singapore where there’s a scholarship offer with 6 years working contract after, so he could be able to get a chance to be in the governments and to become a governor for Tapanuli, a new province of his dream. END_OF_DOCUMENT_TOKEN_TO_BE_REPLACED In the deserted hills of an Indonesian island, Marlina (Marsha Timothy), a young widow, is attacked and robbed of all her livestock by a gang of seven bandits. She then defends herself, setting out on a journey to find justice, empowerment, retribution and redemption. But the road is long, especially when she begins to be haunted by the ghost of her victim. A stunning Scope western set to a Morricone-inspired score, this unique tale of female cinematic revenge takes no prisoners. END_OF_DOCUMENT_TOKEN_TO_BE_REPLACED Impulse (1977)
An early experimental abstract animation, made by drawing directly on to 16mm film END_OF_DOCUMENT_TOKEN_TO_BE_REPLACED 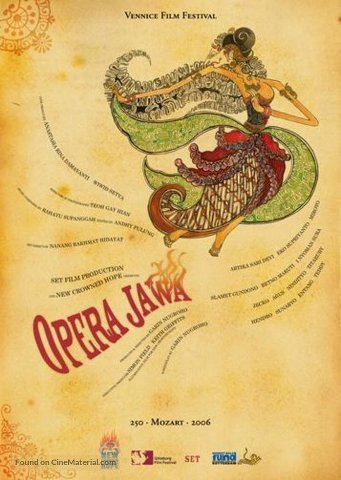 Synopsis:
Siti (Artika Sari Devi) and Setio (Martinus Miroto) are a married couple living in a small village. They were once dancers in plays depicting the Ramayana, but have since retired from the stage to sell earthenware pottery.

Siti used to play the part of Sita, the wife of Prince Rama, whom Setio portrayed. In an episode from the Ramayana, Siti becomes the object of desire of evil King Ravana and is abducted by him.

The events of the Ramayana are paralleled in the characters’ real lives when Ludiro (Eko Supriyanto), a butcher who rules over all the village’s business affairs, tries to seduce Siti. END_OF_DOCUMENT_TOKEN_TO_BE_REPLACED