In order to flee from powerful enemies, young Mayan king Balam leads his people north across the Gulf of Mexico to the coast of what will become the United States. They build a home in the new land but come into conflict with a tribe of Native Americans led by their chief, Black Eagle, while both Balam and Black Eagle fall in love the beautiful Mayan princess Ixchel. END_OF_DOCUMENT_TOKEN_TO_BE_REPLACED

Synopsis:
Small-town lawyer Sam Bowden’s life becomes torturous when Max Cady re-enters his life. Cady went to jail for 8 years after Bowden testified that Cady attacked a young woman. Now that Cady has been released, he begins to terrorize Bowden and his family, particularly targeting Bowden’s daughter, Nancy. Initially, Cady uses his newfound knowledge of the law (learned in prison) to annoy the Bowdens, then poisons the family dog… Who’s next ? END_OF_DOCUMENT_TOKEN_TO_BE_REPLACED

Wikipedia wrote:
Cardiff Bay played a major part in Cardiff’s development by being the means of exporting coal from the South Wales Valleys to the rest of the world, helping to power the industrial age. The coal mining industry helped fund the building of Cardiff into the Capital city of Wales and helped the Third Marquis of Bute, who owned the docks, become the richest man in the world at the time. END_OF_DOCUMENT_TOKEN_TO_BE_REPLACED

Synopsis:
A group of Army personnel and nurses attempt a dangerous and arduous trek across the desert of North Africa during World War II. The leader of the team dreams of his ice cold beer when he reaches Alexandria, but the problems just won’t go away. END_OF_DOCUMENT_TOKEN_TO_BE_REPLACED

When college professor Peter Proud begins to experience flashbacks from a previous incarnation, he is mysteriously drawn to a place he has never been before but which is troublingly familiar. As if drawn to her by cosmic force, he soon finds himself unwittingly in the company of his previous incarnation’s wife. This woman, Marcia Curtis, recognizes in Peter startling characteristics which he shares with her dead husband, Jeff. Even the sound of his voice seems at times to be that of the dead man. Peter becomes romantically drawn to Ann Curtis who is or was his daughter (Jeff and Marcia’s daughter). Recognizing the incestuous nature of their relationship, Mrs. Curtis tries to keep the two young people apart. But how? Must she reveal the terrible secret of the final minutes she shared with her husband in order to keep this man from her (their?) daughter? END_OF_DOCUMENT_TOKEN_TO_BE_REPLACED

Plot synopsis:
The spectacular hordes of Cossack horsemen flying across the steppes to do battle with first one enemy and then another are the highlights of this otherwise thinly scripted costume drama set in the 16th century in the Ukraine. After the Cossack leader Taras Bulba (Yul Brynner) makes a pact with the Poles to join forces against the Turks and drive them from the European steppes, victory brings betrayal as the Poles then turn on their ally and force the Cossacks into the hills. From there, Taras Bulba decides that one of his sons, Andrei (Tony Curtis), will be sent to Polish schools to better learn the nature of their enemy. While away from home and hearth, the adult Andrei falls in love with a Polish noblewoman, Natalia (Christine Kaufmann, who would become the second Mrs. Curtis). As time progresses, the tensions between father and son, loyalty and love, ethnic identity and assimilation steadily increase until they end in tragedy. Taras Bulba was nominated for a 1963 Academy Award for “Best Music”, scored by Franz Waxman (By Eleanor Mannika, from Allmovie). END_OF_DOCUMENT_TOKEN_TO_BE_REPLACED 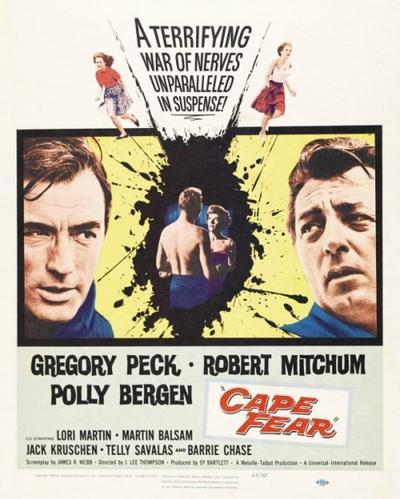 The Original Masterpiece of Revenge, Confrontation and Murder!

Gregory Peck and Robert Mitchum star in Hollywood’s classic tale of revenge and murder. Robert Mitchum is unforgettable as Max Cady, an ex-con determined to exact a terrible revenge on Sam Bowden (Gregory Peck) and his family.

Sam is a small-town lawyer whose worst nightmare comes true when the criminal he helped put away returns to stalk his beautiful young wife (Polly Bergen) and teenage daughter (Lori Martin). Despite help from the local police chief (Martin Balsam) and a private detective (Telly Savalas), Sam is legally powerless to keep Max from playing his sadistic game of cat and mouse. Finally, Sam must put his family’s lives at stake in a deadly trap that leads to one of the most suspenseful and heart-pounding confrontations ever committed to film.

Director J. Lee Thompson builds tension with each scene leading to a deadly showdown at Cape Fear. This is truly a masterpiece of shock and suspense. END_OF_DOCUMENT_TOKEN_TO_BE_REPLACED