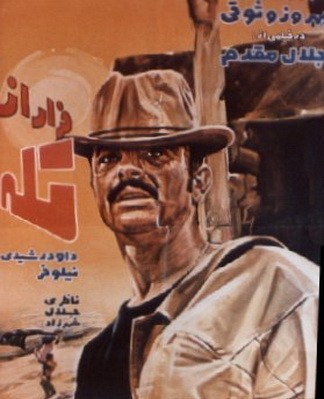 Farar az Tale is an unknown film out of Iran. Even in Iran nobody remembers of this beautiful little masterpiece. There are so many successful visual and musical devices all along the film. The first one is just at the opening and before the opening credits. A man is dropped on the street. Another man tries to see if he is still alive. In finding that he is not, he turns his head towards Morteza (Behrooz Vosooghi) and by his eye expression lets him know that. All that in silent cinema and taking only 23 seconds. That is truly cinema, The art of image! Then the opening credits start, during which we see Morteza in prison, his moustaches are little by little growing. This is economy of great cinema. Using the time of the credits for letting us know that he is in prison and making us feel the length of his stay. The proper plot will begin now, when he comes out of prison and looks for his beloved woman Mehri (Nilufar). Another great moment of the film is when Morteza is looking for a solution to find somehow the 10 000 tomans that he needs to give to the man who married his beloved to get her divorce. Now wandering in the city and its outskirts he walks, stops and sits and looks at people working. Great music of Rubik Mansuri covers this sequence, and still shots or pans get dissolved to each other and gives us impression of boring time that Morteza is experiencing under the hot sun of the South. Iranian cinema is full of so great films… It is a pity that they don’t get any chance to be known… The actors, Behrooz Vosooghi, Davood Rashidi and Abbas Nazeri are absolutely great. END_OF_DOCUMENT_TOKEN_TO_BE_REPLACED