Jiri Menzel of Closely Watched Trains fame directed the sweet little Czechoslovakian comedy/drama My Sweet Little Village. The life’s blood of the titular community is a collective farm. Marian Labuda is the farm’s truck driver, and also the
partner-protector of Janos Ban, who is the village idiot. Like everyone else in the village, Labuda has watched out for Ban and covered up his mistakes, but in recent weeks the situation has become intolerable and Labuda demands a new partner. As Ban prepares to be relocated to Prague, we cut away to various subplots, all of which lead to the same conclusion: the hapless Ban has always been the “glue” that has held the community together. A contrite Labuda heads for Prague to invite Ban to come back home. Originally titled Vesnicko Ma Stediskova, My Sweet Little Village was a 1986 Academy Award “best foreign-language picture” nominee.
~ Hal Erickson, All Movie Guide END_OF_DOCUMENT_TOKEN_TO_BE_REPLACED 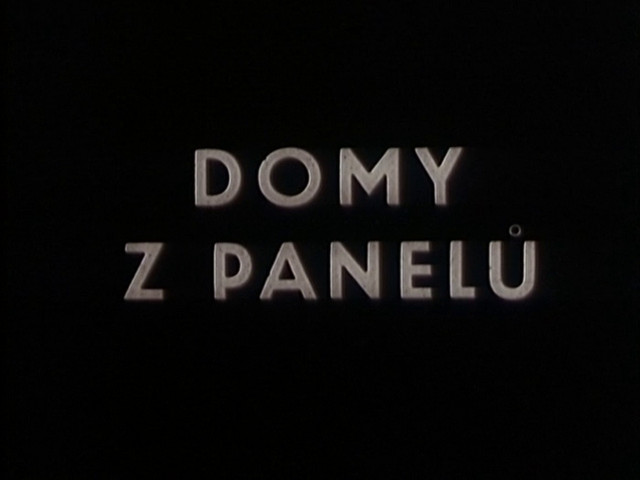 A student work by Jiří Menzel, filmed during his second year at the FAMU film school. Views of old Prague and its tenement buildings, symbolizing the obsolete past, alternate with shots of construction sites for new prefabricated apartment buildings. In spite of certain unavoidable propagandistic overtones added by the director, it is notable as the beginning of his search for a “dramaturgy of colors.”

Quote:
One of the defining works of the Czech New Wave was the portmanteau film Pearls from the Deep (Perlicky na dne, 1965). Not only did it bring five key directors of the Wave (Chytilova, Jires, Menzel, Nemec and Schorm) together in one film, making it the Wave’s official “coming out” as a group, but it tied them to a writer, Bohumil Hrabal, whose ability to capture the rhythms and refrains of everyday spoken Czech was highly influential on the Wave’s direction END_OF_DOCUMENT_TOKEN_TO_BE_REPLACED

Quote:
Short Cut is a comedy revealed more in the acting and witty dialogue than in the simple premise of the story itself: how the Czech writer Bohumil Hrabal was born. Actually, the story is, in many ways, the writer’s conception. The setting is a small town where Hrabal’s father Francine (Jiri Schmitzer) is in charge of a large brewery. Both the blessing and bane of his life is his gorgeous wife Marja (Magda Vasaryova). Blessing, because she is not only beautiful but resourceful and intelligent and lively, bane because every other man would like to get to know her better. Marja saves the day more than once, and the couple are happy in their life together. When Francine’s brother arrives for a visit, an attraction starts to develop between Marja and her brother-in-law that may have upset the marriage, were it not for a fortuitous accident. Marja sprains her ankle and her husband is “forced” to take care of her – alone. Soon after, the town gets their first radio and life takes a permanent turn for a faster lane. Marja cuts her long, blonde tresses and dons a short skirt which mortifies her husband, until he learns they are going to have a baby. It is 1916 and Hrabal is on the way. The comedy will one day continue as he goes from gestation to adulthood and discovers his writing talents at the age of 48. Coupled with the Czech director Jiri Menzel, Hrabal’s comedic writing finds a kindred cinematic spirit. This film won a Jury Prize at the 1981 Venice Film Festival. END_OF_DOCUMENT_TOKEN_TO_BE_REPLACED

Synopsis:
Fed up with the daily hassle in the urban Prague, Oldrich Lavička, his wife and their children Zuzana and Petr decide to buy a summerhouse in a rural place, for the weekends. They reach an agreement with the 70-year old owner of the house, Komárek, to rent the place while he is suppose to move away and live with his son. The Lavička family encounters the rural life: a goat eats their cakes, villagers all wonder how can they sleep for so long while they encounter a flea plague. In the end, however, Komárek decides to stay in the house. END_OF_DOCUMENT_TOKEN_TO_BE_REPLACED

Description: Black detective comedy Crime in the Cabaret is set in a cabaret Tartaros, where one evening lost a pearl necklace singer Regina Clara gave her devoted admirer of the minister of justice, and where it is later killed by one of the circus … The film shot in 1968, Jiri Menzel as his third feature film with a script, which collaborated with Joseph Škvoreckým and Jiri Suchy. An important part of the movie are the songs of George and Šlitr George Suchy, which in addition to the two protagonists sing Eva Pilarová. END_OF_DOCUMENT_TOKEN_TO_BE_REPLACED

The story of a soldier looking after a broken plane in a remote Soviet village. Meanwhile, the German-Soviet war breaks out, but he carries on guarding it, protecting it even against the NKVD and Red Army, brought there on the information of his conscientious fellow-citizens. Based on a book by Russian writer Vladimir Voynovich, published in 1975 in Paris; Voynovich himself emigrated in 1980 following persecution by the regime. The film uses almost exclusively non-professional actors, and its tone captures the atmosphere of the start of the war and also of coloured film. END_OF_DOCUMENT_TOKEN_TO_BE_REPLACED