Quote:
The multi-part film is a difficult kind of cinema to get right but Duvivier’s Le Diable et les dix commandements is a rare exception where the form succeeds admirably. The film consists of seven roughly 15 minute sketches, each showing what may happen if one or more of the Ten Commandments is broken. Each sketch is self-contained (except for the last which returns to the first) and linked by a nasty slithery serpent who has a very strange sense of humour. The sketches are either mini-dramas, usually with a clever twist at the end (the best instance of this being the second sketch: “Do not commit adultery”), or comic. The sketch featuring “Do no steal” is an outrageous comic farce with Jean-Claude Brialy and Louis de Funès, made even more hilarious by Duvivier’s unsubtle attempt to ape the New Wave film directors. END_OF_DOCUMENT_TOKEN_TO_BE_REPLACED

MG REVIEW
“Maria Chapdelaine” beautifully supports and sustains French filmmaker Julien Duvivier’s gift for “poetic realism.” At base, this is a simple 19th century romantic triangle. Canadian lass Madeleine Renaud is adored with equal fervor by aristocratic Jean-Pierre Aumont and by crude lumberjack Jean Gabin. Her indecision paves the way for tragedy. Yes, Maria Chapdelaine is a bit old-fashioned in technique and story material, but that fact never stopped Duvivier from turning out a film of genuine merit. Though the 1984 remake, directed by Gilles Carle, is superior to Duvivier’s, the earlier film shouldn’t be ignored” END_OF_DOCUMENT_TOKEN_TO_BE_REPLACED

Quote:
Fates of multiple otherwise disconnected characters intertwine miraculously under the sky of Paris. And it all happens in one day. END_OF_DOCUMENT_TOKEN_TO_BE_REPLACED

Criterion wrote:
Proud, eccentric, and antisocial, Monsieur Hire (Michel Simon) has always kept to himself. But after a woman turns up dead in the Paris suburb where he lives, he feels drawn to a pretty young newcomer to town (Viviane Romance), discovers that his neighbors are only too ready to suspect the worst of him, and is framed for the murder. Based on a novel by Georges Simenon, Julien Duvivier’s first film after his return to France from Hollywood finds the acclaimed poetic realist applying his consummate craft to darker, moodier ends. Propelled by its two deeply nuanced lead performances, the tensely noirish Panique exposes the dangers of the knives-out mob mentality, delivering as well a pointed allegory for the behavior of Duvivier’s countrymen during the war. END_OF_DOCUMENT_TOKEN_TO_BE_REPLACED

Plot summary :
In a village of the Po valley where the earth is hard and life miserly, the priest and the communist mayor are always fighting to be the head of the community. If in secret, they admired and liked each other, politics still divided them as it is dividing the country. And when the mayor wants his “People’s House”; the priest wants his “Garden City” for the poor. Division exist between the richest and the poorest, the pious and the atheists and even between lovers. But if the people are hard as the country, they are good in the bottom of there heart. END_OF_DOCUMENT_TOKEN_TO_BE_REPLACED 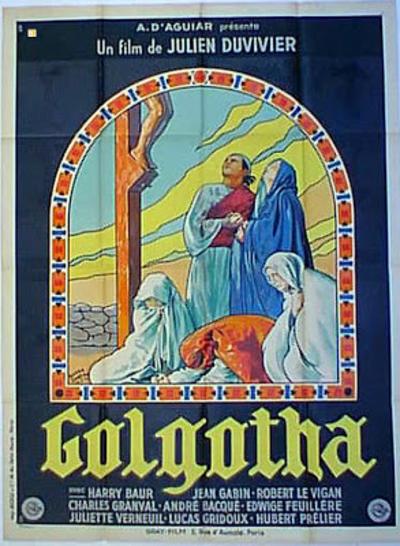 Golgotha is noteworthy because it is the very first sound-picture ever made about Jesust. On top of that, it is thoroughly well done and engrossing. It starred a cast of hundreds—perhaps the biggest ever assembled for a film at the time. Like Cecil B. DeMille’s 1927 film King of Kings, Duvivier gives his film a glossy, Hollywood look featuring terrific sets and (at the time) epic camera shots, but unlike many Hollywood incarnations of Jesus’ life, the story is decidedly intimate, focusing on characters who speak quietly in closed rooms rather than over-expressive actors who wear their Shakespearian training (or lack thereof) on their sleeves. END_OF_DOCUMENT_TOKEN_TO_BE_REPLACED 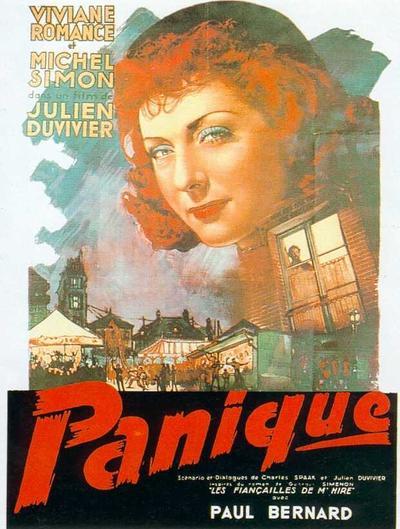 Review
After his largely lacklustre stint in Hollywood during World War II, Julien Duvivier returned to France a changed man, and this is clearly reflected in his first French film after the war, Panique. Disillusioned with the mawkish tendency of American cinema, with its obligatory “Happy End”, Divivier set out to make a film that better reflected the times he lived in. To that end, he adapted a novel by the popular Belgian writer Georges Simenon, a story of unrequited love and cruel betrayal. END_OF_DOCUMENT_TOKEN_TO_BE_REPLACED