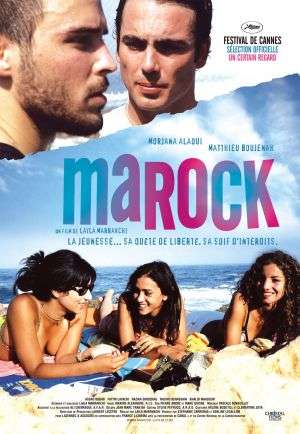 Marock is the 2005 Moroccan film by the female Muslim director Laila Marrakchi. The movie was very controversial as it deals with a Muslim/Jewish love between two high school mates, Rita and Youri. The film was 2006’s most successful film in Morocco, scoring more than 3 million dirhams at the Moroccan box-office, according to TelQuel.
The film was shown in Moroccan cinemas without being edited or censored.[citation needed] The title Marock is a play on words based on the French name of Morocco Maroc and Rock as in Rock’n Roll.

The universal language of youthful rebellion takes center stage in director Laïla Marrakchi’s tale of a Moroccan Muslim teen who falls for a handsome and progressive-minded Jewish boy. High school is drawing to a close for 17-year-old Rita (Morjana Alaoui) and her carefree friends, and as the footloose girls pound the pavement of Casablanca’s Anfa district, it seems that their summer of fun is already well under way. When Rita meets fun-loving Youri (Matthieu Boujenah) and the pair hit it off, her liberal Muslim family’s open-minds soon begin to close when they discover that their daughter’s new boyfriend is Jewish. END_OF_DOCUMENT_TOKEN_TO_BE_REPLACED